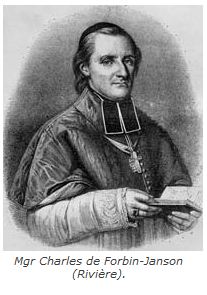 Charles de Forbin-Janson was born in Paris on November 3, 1785 from an illustrious family of Provence. Back in Paris after emigrating because of the Revolution, he began his theological studies at the major seminary of Saint-Sulpice in 1808 and was ordained to the priesthood in Chambéry in December of 1811. He remained at Chambéry for some time as vicar general; then, upon his return to Paris, he joined up with Abbé Rauzan, founder of the society of the Missionaries of France.

Appointed to the episcopal see of Nancy on November 21, 1823, he was consecrated bishop on June 6, 1824. Much more the apostle and missionary than the administrator, he found himself entangled in irresolvable problems during the Revolution of July 1830 and was obliged to leave the diocese. Initially, he left the administration in the hands of vicars general, then of two coadjutors, Bishop Donnet from 1835 to 1837 and Bishop Menjaud from 1837 to 1844. He reassumed his preaching in France, then preached in Canada and the United States from 1839 to 1841. In 1843, he founded the society of the Holy Childhood and came to die in the La Guilhermy castle near Marseilles on July 11, 1844.

Eugene de Mazenod and Charles de Forbin-Janson knew each other already in 1806 and at that time Eugene committed himself to remain his lifelong “loyal and faithful friend.” Their friendship grew stronger at the seminary of Saint-Sulpice in Paris. Both of them were members of the Association of Friends, a missionary group and of the catechism of perseverance. (LEFLON I, P. 337-339, 396-399; Mazenod Diary, May 8, 1839) In the month of August, 1809, they made a trip to Rouen. On December 26, 1811, Eugene specifies that he celebrated Mass, among other things, for his “good friend Charles de Forbin-Janson.” (Oblate Writings I, vol. 14, no. 100, p. 231)

Upon his return to Aix in 1812, Abbé de Mazenod considered Charles de Forbin-Janson his one and only friend. From 1813 to 1817, he wrote him fifteen letters. It is especially through these letters and subsequently through the letters written to Abbé Tempier that we know the projects and the activities of Eugene from 1813 to 1817. At the time, Charles invited him to come and join him in the society of the Missionaries of France, but Abbé de Mazenod decided rather to found the Missionaries of Provence. He told his friend about the opposition he was experiencing from the parish priests of Aix and the difficulties he was encountering in forming the first group of missionaries.

From 1817 to 1835, contact between the two friends became less frequent, but they did work together during the mission of Marseilles and that of Aix in 1820. In 1821-1823, the friends of Forbin-Janson exerted influence in Paris to have him appointed bishop of Marseilles whereas Eugene had been working for a long time to have Fortuné de Mazenod appointed. (Mazenod Diary, March 19, 1839) In 1835, Bishop de Mazenod, who had had to withdraw from Marseilles during the Icosia affair and had a better understanding of Forbin-Janson’s position who had been banished from his diocese since 1830, wrote him a letter on July 16 in which he scolded him for never giving any news about himself and hardly answering any letters. He added: “Anybody else would come to the conclusion, would he not, that he has been mistaken these past thirty years to think of you as a friend. But I am really yours and nothing that concerns you will ever find me indifferent.” (Oblate Writings I, vol. 15, no. 178, p. 225) December 11 of 1835 he urged him not to give in to discouragement; they are “men of the Church” and the salvation of souls is their “special vocation.” (Oblate Writings I, vol. 15, no. 181, p. 229)

His friendship for Forbin-Janson notwithstanding, Bishop de Mazenod always judged him in an objective light. He scolded him and gave him advise that he “never followed.” (Mazenod Diary, May 11, 1837) On July 19, 1814, he had already told his friend that he had become accustomed to his “inconceivably unstable projects”. During his stay in Paris in 1837, after being appointed bishop of Marseilles, Bishop de Mazenod set in motion negotiations to reconcile Forbin-Janson with the minister of public worship. In his diary entry of April 8, 1838, “This holy prelate always has threatening words on his lips. With that attitude, it is not easy to come to an understanding with those who hold the power and have the strength to wield it.” (Oblate Writings I, vol. 19, p. 81) In 1842-1843, Bishop Forbin-Janson stopped off in Marseilles a few times. He did some preaching for the society of the Propagation of the Faith and worked to set up the society of the Holy Childhood which Bishop de Mazenod always refused to establish in his diocese in order not to prejudice the work of the Propagation of the Faith. (Letters to the society of the Propagation of the Faith, October 29, 1850 and June 1, 1860.)

On June 13, 1844, Bishop Forbin-Janson arrived at Marseilles “in the most pitiable state of health. It wrung my heart to see him ailing so,” Bishop de Mazenod reflected that day. On the 23rd he went to visit Mr. de Janson in the countryside at Aygalades, and on the 28th Bishop de Forbin-Janson came to see him at the bishop’s house. The bishop of Nancy did not mention his state of health, health that the Bishop of Marseilles, for his part, found so seriously compromised. On July 9, he went to see him again and told him “the bald truth.” Forbin-Janson must as quickly as possible prepare for death and make his will, otherwise his immense fortune would fall into the hands of his only brother. On July 11 the news was brought to Bishop de Mazenod that the Bishop of Nancy had died. Before dying, he dictated these few words for the bishop of Marseilles. “My best and old friend, I embrace you with all my heart in which is conserved the little strength that remains in me. Your old friend, Charles, Bishop of Nancy. (Mazenod Diary, 23 and 28 of June, 9, 11-13 July, 1844)