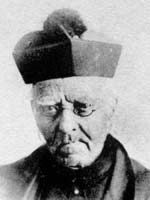 Jean Léonard Gallo was born at San Remo in the diocese of Ventimiglia on December 17, 1935. After having completed some solid studies at the Jesuit college in his city, he began his novitiate at Montolivet on December 7, 1854 and made his oblation on December 8, 1855. In the December 3 General Council session, he was admitted to vows. In the session’s report, the secretary wrote about him: “Brother Gallo made his entire novitiate at Montolivet where they judged it fitting to keep him for his studies. His conduct proved consistently wise with regular observance of the rules. With good results, he studied philosophy. His compliant and accommodating character made him loved by everyone. Everything speaks well for this young man as a good candidate who will render useful service in the Congregation.”

He continued his scholastic studies at Montolivet until his priestly ordination on September 8, 1858. In his reports, Father Mouchette, moderator of scholastics, always saw him in a favourable light: “1855, …a little shy, but very good and very regular in his observance; 1856, calm in temperament, but a little variable…; 1858, a fragile health that maintains itself. Very good, regular in his observance, but always scrupulous, which is a great impediment. I hesitate allowing him to be ordained in this condition.”

After his ordination, Father Gallo was assigned to Vico as a mission preacher. He then lived at Aix in 1863, at Le Calvaire in 1864, then at Notre-Dame de la Garde. He was superior at Vico from 1878 to 1881, then he was sent to Turin in 1881 with a view to making a foundation there. The attempt was unsuccessful. During his first years in the ministry, Father Gallo preached missions and retreats. “He ranged through the Dauphiné and Provence,” wrote the author of his obituary, “and even into Corsica, proclaiming the word of God, sometimes in French, sometimes in Italian, since he spoke either language with equal facility. His sermons were solid, liberally supplied with doctrine; his speech was lively, vivid and incisive. His face and his gestures were expressive and his voice was energetic and powerful. He was endowed with the best qualities of a mission preacher; and his apostolate produced the most favourable fruit.”

In 1882, he was recalled to Marseilles to take charge of ministry to the Italians. Until his death, he dedicated himself to this work with zeal through the services offered in the chapel, through confessions and visits to the sick. He was beloved of the people he served and they celebrated his 50 years of priesthood on October 25, 1908. At the beginning of January 1918 his strength declined visibly. He died on January 19. La Semaine religieuse de Marseille announced his passing and, among other things, wrote: “It will be a genuine cause of sorrow for us, for many priests, religious men and women, for large numbers of worthy people in the poorer sections of the city and for many others as well, that we will no longer hear this full, ringing, metallic voice which pronounced clearly every word, neither too fast nor too slow, as was befitting a churchman in total possession of himself, of his thought and his expression. It will be a real loss to no longer see his aged face, composed, serious, severe, rarely smiling, that is true, but good and kindly, immediately and spontaneously commanding respect, confidence and sympathy.”