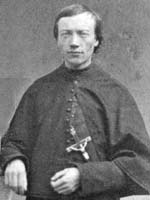 Édouard Gandar was born at Luppy in the diocese of Metz on July 22, 1839. After his secondary studies at the minor seminary of Montigny, he began his novitiate at Nancy on September 28, 1859. The master of novices mentioned him only on September 28, 1860 and wrote: “Gandar: Very average as regards talents, but good character, virtuous, obedient, with a robust enough health…” He was a scholastic brother at Montolivet in 1860-1862 and that is where he made his oblation on February 7, 1861. In his reports, Father Mouchette, moderator of scholastics, wrote in March of 1861: “Gandar, excellent, very regular in his observance, a bit irrepressible, he is a virtuous individual, has good will, but also has some flippancy.” In the autumn of 1862, he accompanied the body of scholastic brothers to Autun where he was ordained to the priesthood on May 21, 1864. The assessment of his superiors in his regard is summarized in the Personnel Registry of 1862-1863. This is what we read there: “Very good spirit, much good sense, average intelligence, good memory, shy temperament, meticulous in governing his own conduct. Has dedication, but little energy. In France, he could profit from a lengthy preparation. In the missions, he would do very well without overtaxing his talents. In short, a good candidate, solid in his prayer life, serious in his conduct.”

After his ordination, Father Gandar was initially professor of history and dogma at the Sacred Heart scholasticate in Autun from 1864 to 1867. From January 1867 until October 1871, he was chaplain of the Sisters of the Holy Family of Bordeaux, then master of novices and treasurer at Notre-Dame de l’Osier from 1871 to 1882. Father Auguste Lavillardière, the superior of the house, wrote in his 1880 report that he had twelve novices who were being formed “under the gentle, firm, prudent and wise hand of Rev. Fr. Gandar.” On June 30, 1882, Father Gandar was appointed provincial of Midi. In his report of that year, Father Lavillardière wrote: “The personnel of Notre-Dame de l’Osier suffered a substantial loss three months ago when Rev. Fr. Gandar was appointed provincial. Master of novices, treasurer and charged with several other duties, we have always found him ready to render service, to step into the breach, that is, to carry burdens. It would be difficult to have created in one fell swoop more voids by the transferring of one individual than we have done in this instance. I do not know who among our many visitors, our retreatants, does not have a thousand things for which to thank him for the good, tactful and ready services rendered over an eleven year span by the one we have come to know at the time as the good hearted father master…”

He remained provincial until June 22, 1888. As provincial, he accompanied Father Fabre in 1886 in his canonical visitation of the houses of the Midi. And, in 1887, he went to Diano Marina to assess the damage wrought by the earthquake of Ash Wednesday, February 23, which claimed the life of two minor seminarians. On February 28, he wrote to Father Fabre: “Our house is in the same shambles as other houses. It is not even safe to enter the premises to save any of the furnishings. We fear that everything is a total loss for us as it is everywhere else.” In 1887, the provincial took up residence at Le Calvaire in Marseilles. Until this time, he had resided at l’Osier. Father Lavillardière was sorry to see him go and wrote in his report: “When our priest mission preachers were away, it was a real consolation for us as well as a much appreciated help on those days of receiving crowds of pilgrims to have among us Rev. Father Gandar, very obliging and much appreciated by everyone here, particularly by our visitors, the parish priests. What hours did he not spend in the confessional! What Masses at a late hour! What preaching stints, even at the sanctuary were supplied by his charity and his zeal!”

In the month of August 1888, Father Gandar was appointed superior of the scholasticate of Bleyerheide in Holland, transferred to Liège in Belgium in August of 1891. At the 1898 Chapter, he was elected assistant general and took up residence in the General House in Paris where he was superior from 1900 to 1906. When Father Anger died in 1906, he was appointed pro-director of the Sisters of the Holy Family of Bordeaux, a post he occupied until 1924. Under various titles, he participated in the General Chapters of 1887, 1898, 1904, 1906 and 1908.

He died in Bordeaux on August 23, 1928 and was buried in the Oblate vault at Talence. When Father Gandar died, Father A. Bommenel, his successor with regard to the Sisters of the Holy Family, wrote; “The void Rev. Fr. Gandar left among us is huge. He will no longer be there to edify us with his example, to guide us with his sage advice, to tell us of the early years of the Congregation, of our venerated Founder and of our old priests, to pray and suffer on behalf of the works of our Congregation and the congregation of the Holy Family.”