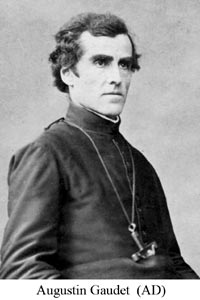 Marie-Joseph Augustin Gaudet (Godet) was born in Corbelin, in the diocese of Grenoble, France, on May 5, 1821. His parents were François Gaudet and Jeanne Carriot. After some years of secondary study at Notre-Dame de Lumières, he entered the novitiate of Notre-Dame de l’Osier on June 28, 1843 and there he took his first vows on July 16, 1844. He studied theology in the major seminary of Marseilles in 1844-1846 and then in Notre-Dame de l’Osier in 1846-1847 while acting as Treasurer at the same time. In the spring of 1847, during the recruiting campaign of Fr. Léonard Baveaux, the novitiate was filled to capacity and there was a shortage of everything in the house. The Founder then wrote to the young treasurer on April 5: “One should not one’s self be downcast easily when one is treasurer of house which belongs to God. Otherwise divine Providence might become angry.”

On September 1847, Augustin Gaudet received an obedience for Canada and he was ordained priest in Marseilles by Bishop de Mazenod on September 26. Some days later Bishop de Mazenod announced to Bishop Guigues that Fathers Bernard and Gaudet, “two angels full of virtue and dedicated to the point of heroism”, were leaving for Canada “in a state of rare fervour”. This state of fervour is apparent in two letters of Fr. Gaudet to the Founder. In the first he asks to be sent to Canada and in the second he thanks him for the obedience. In the latter, among other things he writes “I am being separated from your Excellency, you have loved me very much but be consoled because ours is no more than a bodily separation. My heart remains entwined with yours. Besides, I will bring my Rule Book. It contains your saving advice, your will, all that your heart contains. You shall therefore always be present with your son, I shall read it often and I shall often press it to my lips. It will be my refuge and my consolation in suffering. I am convinced that I shall sanctify myself by the Rule and that is through it that I shall sanctify souls. I swear fidelity to it and love forever…”

Having arrived in Canada at the beginning of November 1847 Father Gaudet took up residence, first of all, in the house of Saint-Pierre-Apôtre in Montreal and he preached some missions with his confreres. In September 1848, he accompanied Father Telmon to Pittsburgh in Pennsylvania for the purpose of founding a seminary. Because of the extreme poverty of the house and the little interest shown by the bishop, the Fathers soon returned to Montreal. During the summer of 1849, Bishop Jean-Marie Odin of Galveston, Texas, came to Montreal in search of helpers. In the month of October, without the authorization of the Superior General, Father Telmon left for Texas and he brought with him Fathers Gaudet and Soulerin. Bishop Odin entrusted the pastoral care of Brownsville to them and, within a few months the Fathers built a presbytery and a church. In 1850, when Bishop de Mazenod learned of this initiative, he did not approve of it and he ordered Fathers Gaudet and Soulerin to return to Canada. Father Telmon, who was now a sick man, was soon to be recalled to France. Fr. Gaudet was soon assigned to Bytown. In 1850-1852 he was director of the college and the major seminary, then chaplain to the Grey Nuns from 1850to 1854.

In 1854, Bishop Louis de Goesbriand offered the Oblates the parish of Saint –Joseph in Burlington, in the state of Vermont. Father Gaudet was pastor of this parish before being sent as Superior to the mission of Brownsville from 1856 to 1874. During those years the Superior had a church and college built. He also accepted to send Oblates to Mexico. Shortly after his return to Texas, Father Gaudet became seriously ill with yellow fever, the epidemic that brought about the death of the young priest Hippolyte de Lustrac and Brother Jose Maria Garcia. It was on this occasion that the Founder wrote on November 26, 1858: “O cruel mission of Texas! What terrible wounds you inflict on my soul! This is now the fifth victim that you have devoured.” During his years as Superior in Brownsville, Father Gaudet was present at the at the Council of Baltimore (1866) and then at the second and third Councils of New Orleans (1860, 1872). He also travelled to Europe six times.

After eighteen years in Texas, Father Gaudet, in 1874, accepted the less weighty responsibility of superior in the hose of Saint-Joseph, Lowell, Massachusetts. However, because of the frailty of his health, he soon resigned. In 1876 he spent a few months in the parish of Holy Angels, Buffalo, New York, but he then returned to Ottawa and was chaplain to the Grey Nuns (1879-1893) and the Good Shepherd Sisters (1890-1893).

In October 1893 he once again received an obedience for Texas as Superior of Brownsville. It was there that he celebrated the Golden Jubilee of his religious profession in July 1894. Soon afterwards he became ill and died on June 10, 1895.