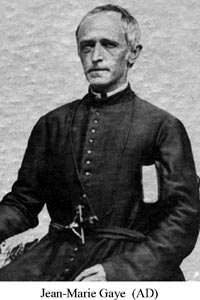 Jean-Marie Gaye was born on November 12, in Saint-Pé, diocese of Tarbes, France. He studied in the minor and major seminaries of Tarbes and then began his novitiate in Notre-Dame de l’Osier on October 31, 1850. He took vows in Marseilles on November 21, 1851. In the minutes of the general council for the preceding October 13, we read: Admitted to vows by unanimous vote, Brother Gaye from Tarbes diocese, born on November 12, 1819. He has done two years theology; he is regular in observance, pious, gentle, somewhat slow, but a good and solid religious… sufficiently talented”.

The necrology note on Father Gaye says: “He spent his life among the Mexicans. There was nobody who was his equal in his ability to adapt to the Mexican customs right from the beginning. He was remarkable for his gentleness, his equilibrium and his simplicity of manner and agreeableness. He was loved wherever he went. Everybody found him easy to approach, the poor and the shy saw him only as a kind father because of his goodness to everybody. I would even say he was good-humoured… During the thirty-six years that Father spent in our mission, he was always a model of obedience. He never gave any indication of a desire to change or to be relieved of the endless occupations of his parish, either in Matamoros or in Agualeguas.”