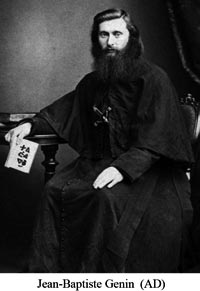 Jean-Baptiste Genin was born on November 4, 1839 at Saint-Alban-de-Roche, in the diocese of Grenoble, France. His parents were Jean and Marie Genin. His father was a stonecutter. He entered the novitiate at Notre-Dame de l’Osier as a student at the beginning of 1858 and began his novitiate on April 30 of that year. The novice master, Father Vandenberghe, mentions him in his reports until the month of October. Sometimes he says that is “humble and pious” but mainly he sees his faults: his character is too lively and spontaneous, somewhat embittered”, somewhat narrow-minded and presumptuous”, “judgement non well formed”.

The novice was probably sent to Montolivet in October 1858 and he remained there for two school years. He took his vows on June 23, 1860 and was sent to Canada. In his notes on scholastics, Father Antoine Mouchette wrote in June-July of that year: “In July Genin was sent to Canada to test his vocation which, in some ways at least, seemed doubtful, and to get him away from his native land, where, as we have learned, his family had a bad reputation.”

At the beginning he taught at the Ottawa College (1860-1865), while studying there theology at the same time. He was ordained priest in that city on June 19, 1864 by Bishop J. E. Bruno Guigues, o.m.i., Bishop of Ottawa. The following year (1865) he left for the missions of Mackenzie and he worked at Fort Chipewyan and at Fort Providence (1865-1867). He came to France in 1867, tried to join the diocesan clergy in the department of Isère, and then worked in the United States without any contact with the Oblates. That is why, on the advice of Father Louis Soullier who did a canonical visitation of America in 1876, he was expelled from the Congregation by decree issued by Father Fabre on September 8, 1876.

Father Genin had already visited Fort Totten, North Dakota, beginning in 1865 and he went back there in 1867 and 1868. He exercised his ministry at Fort Ransom in 1867 and, in that same year he took up residence in McCauleyville, Minnesota, where he stayed until 1873, visiting Fort Abercrombie and Butte-du-Cœur in North Dakota. He then moved on to Sacred Heart parish in Duluth (1873-1882), where he ministered in a number of stations set up along the railway from Duluth to Bismark, North Dakota, and he built a little chapel for the Amerindians in Cloquet, Minnesota, in 1880.

He had many disagreements with the Ordinaries and we lose track of him from 1882 to 1888, but we find him again in Michigan City in 1888 and as missionary apostolic to Bathgate, South Dakota (1890-1900). He was also ministering in Cavalier (1893-1900). He was responsible for the building of several churches and his name was put forward for the Saint Louis, Missouri, Hall of Fame. He died in Bathgate on January 19, 1900.