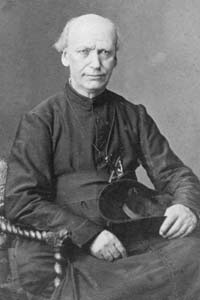 Jean Louis Genthon was born at Grand-Serre, in the diocese of Valence, on December 25, 1806. He was ordained to the priesthood on December 17, 1833. Initially, he was assistant priest and pastor in a few parishes of this diocese. He began his novitiate on January 24, 1845 at Notre-Dame de l’Osier where he made his oblation on January 25, 1846. The General Council had admitted him to vows on December 15 of 1845. In his regard, in the report of the council’s session, we read: “A priest who has done parish work for about ten years. He was always highly regarded by his confreres and his superiors […] During the course of is novitiate, he always displayed edifying conduct because of his punctuality for religious exercises and by the faultlessness of his obedience…”

Few Oblates have had less said about him than he. His name appears only four times in the correspondence of the Founder and of the Oblates previous to 1861 and three times in the General Council’s registry. And yet, this priest enjoyed a full and very meritorious life in two Oblate houses: Notre-Dame de l’Osier from 1846 to 1852 where he was in charge of the parish and Le Calvaire in Marseilles from 1852 until his death where he was one of the priests ministering in that chapel. He dedicated himself unstintingly in three main areas: in the confessional; his confessional was sought out by many of the faithful and the priests of Marseilles, in visiting the sick and in the work of the people’s library with which he endowed the church of Le Calvaire. He was councillor for province Nord in 1851-1852 and provincial treasurer of Midi for a few years from 1856 on.

During the expulsion of the religious which took place in 1880, Father Genthon remained as custodian of the house at Le Calvaire. On December 18, 1881, there was a large gathering of priests to celebrate his fifty years of priesthood in the Italian chapel. Father C. Augier wrote up this feast in Missions of 1882 (p. 88-94). Among other things, he wrote: “Following the religious celebration held in public, there was a private entirely family celebration. One of our friends kindly offered his table to Father Genthon and gathered around him the greatest number possible of his confreres scattered throughout the city by the hurricane blast called the “expulsion.” When the hour for the meeting sounded, all were present except one. Missing was the hero of the feast. They searched for him in every nook and cranny of the house. They called his name. All in vain! Where was he? In his confessional. Old habits die hard.”

After the expulsion, left alone with Father Martin, his health began to decline rapidly and he died September 15, 1882. In his obituary, we read: “He carried with him to lay at the feet of his God and his Judge, the merit amassed during a life of sixty-six years, filled with humility, zeal and charity.”