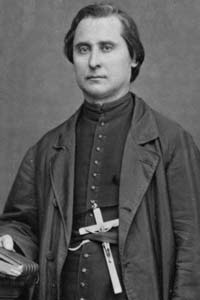 Joseph Gibelin was born at La Garde in the diocese of Fréjus on April 3, 1832. He began his novitiate at Notre-Dame de l’Osier on December 24, 1854 and finished his novitiate year at Montolivet where he made his oblation on December 25, 1855. He was admitted to vows in the General Council’s session of December 3, 1855. The secretary wrote in the session’s report: What Father Mouchette “says concerning Brother Gibelin is […] favourable toward this novice whom he has been guiding since he came from l’Osier in the month of October. Father Vandenberghe’s notes describe him as one endowed with a good character, a strong prayer life and excellent natural aptitude for the religious life. There is only his intellectual ability that the master of novices says he has some doubts about.”

From 1855 to 1860, scholastic brother Gibelin first finished his last year of classical studies, then studied philosophy and theology at Montolivet. In his reports, Father Mouchette, moderator of scholastics, acknowledges each year that this brother is difficult to guide. Generally, he judges him “good and regular in his observance,” but filled with faults: “Over sensitive, very excitable,” “fickle, with alternating fervor and laxness,” “he advances in fits and starts, a trifle stops him cold,” “seems bored with everything and everywhere.” In May of 1860, he wrote: “The last month everything went well. We would, however, have liked to see more stability in his conduct.”

Joseph Gibelin was ordained to the priesthood by Bishop de Mazenod on June 24, 1860 and was sent to Notre-Dame de Lumières where he remained until 1865. Under his name there is written in the Personnel Registry of 1862-1863: “A frail constitution, fine featured, prayerful and devout, a character in harmony with his dull spirit, narrow in his vision. Very average qualities. Has not done well in preaching. He remains at the shrine of Notre-Dame de Lumières.”

In the 1889 report, Father Delpeuch announced Father Gibelin’s death. Among other things, he wrote: “After a long and painful illness, God has taken away from us our worthy Father Gibelin. […] It is enough for us to recall in passing that during several months of great suffering, we could even say of agony, he constantly showed himself as being meek in his pain, asking Our Lord, not for release from the pain, but for the fulfillment of his holy will. At his side, night and day, a Sister of Hope sat watching. […] However, the ministrations of the Sisters were not enough. Given the prematurely deteriorated state of our poor patient, the frequent help of our priests and brothers was also called for. […] Worthy Father Gibelin rendered his soul to God on the morning of July 6, while we were reciting the prayers of the dying. He left us a much valued aroma of edification, the memory of his prayerfulness, his faith and his patience during the long duration of his terrible illness. His death was, therefore, the kind of death every Oblate faithful to his vocation should have.” (Missions O.M.I., 1889, p. 280-282)