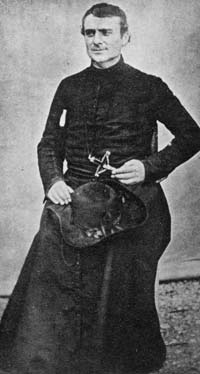 François-Xavier Guinet was born at Chimilin in the county of Pont-de-Beauvoisin in the diocese of Grenoble on September 28, 1824. He studied theology at the major seminary in Grenoble and, after being ordained to the deaconate, he entered the novitiate of Notre-Dame de l’Osier on September 7, 1848. He was ordained to the priesthood by Bishop de Mazenod during one of his visits to l’Osier on August 19, 1849 and made his oblation on September 8 of that year.

He remained at Notre-Dame de l’Osier until 1856 and preached missions with Father Vincens. The Founder corresponded with him in 1852 and 1853 and told him that he left him at the novitiate because he knew he was capable of giving a good example to the community. On September 7, 1852, he added: “The peace you enjoy, my dear child, is a reward for your fidelity and your good spirit. And this itself is a gift from God for which we can never be sufficiently grateful.” (Oblate Writings I, vol. 11, no. 1118, p. 100)

In the month of March 1855, Bishop de Mazenod learned that Father Guinet did not spare himself enough during parish missions and, in consequence, his health was suffering. In May-June, he made him come to take some rest in Marseilles. In September of 1855, Father Guinet was appointed extraordinary consultor of province Nord and, in September 1856, he was appointed master of novices at Nancy. After one year, after a few preaching stints, he began to spit blood and was sent to take some rest at Fréjus from the end of 1857 to the first months of 1858. He returned to Nancy in August of 1858 as superior and master of novices.

In 1860-1861, he was superior and mission preacher at Vico in Corsica, then provincial of Midi from December 1861 until February 23, 1863. He fell ill and began to haemorrhage. Father Fabre made him come to take some rest at Notre-Dame de Talence at the beginning of April 1863. It was there that he died at the age of 38 years and 7 months on May 11, 1863. One of the priests at Bordeaux wrote to Father Fabre: “Even though this cruel loss did not come unforeseen, it was none the less keenly felt. But we are convinced we have one more saint in heaven… The one we mourn constantly edified us his whole life through by his thoroughly apostolic zeal and his angelic prayer life. His dedication to the glory of God and to the welfare of the Congregation in these latter days was developed, we could say, to the point of heroism.”