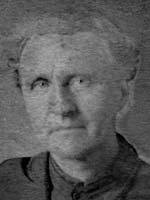 Aristide Hamonic was born at Moncontour in the diocese of Saint-Brieuc on September 23, 1834. He made one part of his secondary studies at the minor seminary of Tréguier and one year of theological studies at the major seminary of Saint-Brieuc. He entered the novitiate of Notre-Dame de l’Osier on November 20, 1857. He made his oblation at Montolivet on January 19, 1959. Upon sending him on to the scholasticate, on September 23, 1858, Father Vandenberghe, the novice master, wrote to Father Mouchette: “This brother is one of those who has made the most progress and the most effort. He has a natural goodness, a tender heart, is sensible, affectionate, generous. He has a less firm and hardy character. So it is that, in his activities, he seems timid and might sometimes be listless but the good dispositions of his heart give him energy and a strength of character that he would not have by nature. He loves God and the Blessed Mother with a very sincere love.”

At Montolivet, the moderator of the scholastics also acknowledged in 1859 and 1860 that scholastic brother Hamonic was “a very good religious, full of good will and zeal… He is one of the most regular in observance and one of the most fervent. An excellent candidate, full of gentleness, generosity, always ready to give a helping hand inspired by a principle of charity…” In the Personnel Registry of 1862-1863, it is written that he has “a speech impediment and no aptitude for preaching.”

Ordained to the priesthood by Bishop de Mazenod at Montolivet on April 29, 1860, initially, Father Hamonic remained at the scholasticate as Father Mouchette’s socius. Then, in 1861, he was sent to the novitiate of Notre-Dame de l’Osier as Father Vandenberghe’s socius. In 1862, he spent a few months at Bordeaux as chaplain of the Sisters of the Holy Family. Then, upon the insistence of Father Mouchette, superior of the church school of Vico, he was appointed to be a professor in this school until its closure in 1864. He then received his obedience for the major seminary of Ajaccio where he was professor, then, treasurer until 1893. Superior of Vico from 1893 to 1899, each year, he preached a few retreats and missions and, every two years, sent Father Fabre a long report on the apostolic activities of the priests of the house, reports published in Missions O.M.I., in 1895, 1897 and 1899.

In 1899, he became treasurer and spiritual prefect at the scholasticate in Rome. He held this post until his death which took place on February 10, 1906. In the Codex Historicus of the house the following entry was made on that day: February 10, one more trial [after the resignation a few days earlier of Fathers Cassian Augier and the Treasurer General, Father Longeon] for the scholasticate. It was the death of our venerated Father Hamonic, carried off by an illness that lasted only a few days.”