Heart of the Founder

The affection of Bishop de Mazenod for the Oblates, his family, etc.
On November 9, 1853, Bishop de Mazenod wrote to Father Ambroise Vincens: “My life is to follow my heart.” In the notes he gave to his director when he arrived at Paris in October, Eugene, the seminarian wrote: “It is hard to understand, given the portrait of myself I have just painted, how sensitive a heart I have, overly so in fact.” (Oblate Writings I, vol. 14, no. 30, p. 67) In almost all his letters to this Oblates, the Founder speaks of his heart, of his paternal love for his sons. In an April 2, 1823 letter to Father Courtès, he confided: “As for the heart, that is another matter, I would argue that to all and sundry, now and in future.” (Oblate Writings I, vol. 6, no. 100, p. 110)

In an October 17, 1835 letter to Father Tempier, the observed “that is how God made me.” To Father Dassy on January 10, 1852, he affirms: “I do not know how my heart is equal to the affection which it nourishes for you all. It is a prodigy which is something of an attribute of God. … No, there is not on this earth a creature to whom God has accorded the favour of loving so tenderly, so strongly, so constantly so great a number of persons…” (Oblate WritingsI, vol. 11, no. 1095, p. 69) The same sentiments are expressed in an April 24, 1855 letter to Father Mouchette: “I love my sons immeasurably more than any human person could love them. That is a gift I have received from God, for which I do not cease to thank him, because it flows from one of his most beautiful attributes and because I have reason to believe that he may perhaps not have granted it to anyone else in the same proportion as he has to me.” (Oblate Writings I, vol. 11, no. 1268, p. 266)

Sometimes Bishop de Mazenod asked himself if “one of the biggest obstacles to my spiritual progress is my over-readiness to give my heart to creatures…” (Retreat of December 1811, Oblate Writings I, vol. 14, no. 95, p. 219) In 1839, he perceived himself as still vulnerable with regard to his affections [heart]. (Diary, March 31, 1839) and in 1856, he wrote once again: “God knows that if I am to reproach myself with anything, it is that I love you too much…” (Oblate Writings I, vol. 12, no. 1304, p. 1) He justifies his paternal love for his Oblate sons by stating this is the way his heart is made, but also because this affection is founded on the virtues of those he loves. (Letters to Father Mouchette, July 19, 1854 and March 22, 1857) These bonds were also fashioned by grace, that is, by the oblation made in the Congregation and by the priesthood that he had conferred on many Oblates. (Letters to Father Charles Baret, August 18, 1843 and Diary, March 25, 1837)

Bishop de Mazenod’s paternal affection for his Oblates caused him untold suffering. Every one of the sixty Oblates who died while he was still living and the 109 Oblates who left after their perpetual oblation wounded his heart. Already in a December 15, 1828 letter to Father Courtès, he admitted: “I pay bitterly for the happiness of loving you.” (Oblate Writings I, vol. 7, no. 318, p. 171) The various aspects of Bishop de Mazenod’s love for the Oblates was set forth by Émilien Lamirande in an article in Études oblates in 1954.

His love for his own family was just as strong. A few times in 1809-1810, he felt that he would have to spend additional time in purgatory because of his excessive love for his family. (Letters to his mother, February 14, 1809 and November 11, 1810) In 1832, Father de Mazenod found that his nephew, Louis, who was studying with the Jesuits in Fribourg, showed little affection and shared little of his news. On September 3, he wrote: “In our family, we make no apologies for showing our feelings. We give much, but also demand something in return. The hearts of the Mazenods and the Joannis were melded together in your mother and myself and that is the most precious inheritance we could ever leave to others.”

This object of his affection as well as his love for Jesus Christ, for the Church and for souls has not yet been the subject of any particular studies. However, we do know that Bishop de Mazenod devoted his life to the service of the Church and for the salvation of souls. He always applied himself to loving Jesus Christ and to following in his footsteps. In this regard, in the September 4, 1837 of his Diary, he wrote: “Let them study Saint John, let them delve into the heart of Saint Peter and his love for his divine master, let them especially examine everything that emanates from the so-loving heart of Jesus Christ, not only for all men, but especially his apostles and disciples, and then let anyone dare to come and preach to us a speculative love, deprived of sentiment and without affection!” (Oblate Writings I, vol. 18, p. 241)

The Relics of the Heart of Bishop de Mazenod
In a March 6, 1857 letter to Father Faraud, the Founder stated that this affection would continue after his death. “If only it had been granted me to see you all pass before me! With what happiness I would have pressed you to my heart! You would have felt it beating, old though I am. That is a place where I have vowed to you and which will go with me to the grave, but will not enter there with my mortal remains, but rather follow my soul into the presence of God, where there will be no need for me to disavow a love so just and so much in conformity with his Holy Will.” (Oblate Writings I, vol. 2, no. 228, p. 139) 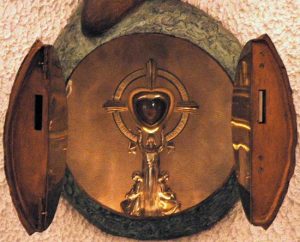 The Relics of the Heart of Eugene de Mazenod at the General House (Bucca).

In conformity with a custom which was formerly commonly accepted, the Founder wanted to leave as an inheritance to his Oblates his heart, the symbol of his affection. In his will drawn up August 1, 1854, he declared: “I would have been really happy if after my death my heart were placed in the sanctuary of Notre-Dame de la Garde at the feet of our good Mother whose temple I have had the happiness of rebuilding…” (Oblate Writings I, vol. 15, no. 191, p. 251) On January 20, 1861, in a codicil attached to his will, he specified: “It is my wish that my heart, divided in two, should be deposed, one half in the sanctuary of Notre-Dame at the feet of my Good Mother, and the other be deposed in the midst of my sons at Montolivet.”

The Founder died May 21, 1861. His heart was excised and cut into two equal halves the day after his death. In virtue of being the heirs and the residuary legatees of the deceased, Fathers Tempier and Fabre initially took custody of these two relics. In 1861-1862, Bishop Cruice, bishop of Marseilles, for all intents and purposes refused to recognize the will of his predecessor and adopted several adverse measures in regard to the Oblates. The general administration was compelled to leave Marseilles to establish themselves in Paris. Fathers Tempier and Fabre took the two relics with them, all the more so that Bishop Cruice had put a non-Oblate administrator in charge of Notre-Dame de la Garde and the issue of having the Oblates relinquish the direction of the sanctuary was raised.

The relic left at the scholasticate of Montolivet followed the French scholastics to Autun in 1862, to Inchicore and Belcamp Hall (Ireland) in 1880 and 1885, at Bleyerheide (Holland) and Liège, (Belgium) in 1888 and 1891, at La Brosse-Monceaux in 1934, at Solignac in 1946 and finally to Aix-en-Provence in 1980. This part of the heart was divided up. One portion is kept at Aix-en-Provence and another portion found its way to the Oblate church, Saint-Pierre-Apôtre in Montreal. This relic and its reliquary were recently stolen and have not yet been recovered.

Before his death in 1984, Father Angelo Mitri, the postulator general, had amassed a lot of notes on the dividing up of the heart and on the various reliquaries. It was based on these notes that I wrote the article which appeared in Vie Oblate Life in 1985.