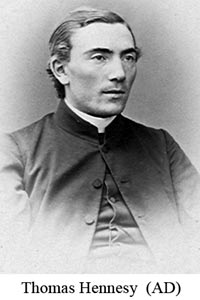 Thomas Hennessy was born in Quinro, Ireland, in the diocese of Killaloe on 19 April 1839. His parents were Michael Hennessy and Mary Ann McMahon. He entered the juniorate in Sicklinghall in 1857 and began his novitiate there on 12 October 1858. At the end of his novitiate he was sent for studies to Montolivet where he made his oblation on 26 December 1860 before Bishop de Mazenod. Although Father Fabre in his obituary of Father Hennessy says that Fr. Hennessy was only a few months in Montolivet because he could not endure the winter weather in Marseilles, the Montolivet scholasticate notes show that he was there from the autumn of 1860 to June 1862. In July 1862 the scholasticate formator writes: “Hennessy: a good enough religious, he has one paralysed lung, even so cheerful, sometimes giddy. This year he has studied hard.” The Sicklinghall codex shows him present in Sicklinghall in August 1862.

He was a teacher in the Belmont House juniorate from 1862 and he was ordained priest by Bishop Whelan in Maynooth on 17 May 1864. The Sicklinghall codex shows him arriving in Sicklinghall on 10 August 1864 with Father Matthews and about 12 juniors when the juniorate was transferred back there. The same source shows him leaving on a new assignment to Leith on 13 October 1965. In 1867 he is listed in personnel lists with the Glencree community. By 1871 he was transferred to Inchicore, where he was second assistant.

Father Hennessy was little suited to preaching parish missions on account of his weak health and his raucous, hoarse voice. He was a success however in giving retreats to religious communities.

Falling sick in Inchicore at the end of 1871, he was confined to his room and died on 27 March 1872. He is buried in the Oblate cemetery in Inchicore.

The Missionary Record 1917 page 151 notes that a cousin of Father Hennessy was interned with other Irishmen in Wetherby February-March 1917.