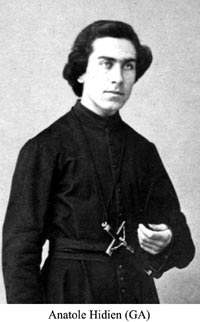 Anatole Hidien was born in Déols, France, on July 2, 1840. “Bursting with life from a very young age, Anatole was no plaster saint” according to what those knew him had to say about him. “Enthusiastic for games, tough in competition, mischievous, laughing, our young tearaway was guilty of more than one breach of discipline.” However, he dreamed of adventure, faraway horizons where he could devote all his efforts to the salvation of souls. He would have made a bad Sulpician but he could become an excellent missionary.

After several years at the cathedral school in Bourges, where he profited from a good education in music, and in the minor seminary of Saint-Gaultier, he was received into the Oblates. He did his novitiate in Notre-Dame de l’Osier and made his perpetual vows in the presence of Archbishop Guibert of Tours. That was on February 17, 1861, only a few weeks before the death of Bishop de Mazenod. The Founder was favourably impressed by the young man’s youthful and pugnacious ardour. For his part, the young scholastic from Montolivet had the consolation of being close to his superior general during his last illness and remaining in the presence of his mortal remains on the night of May 22 to 23, 1861. From Montolivet he went to the new scholasticate at Autun and he was ordained priest there on July 5, 1863. The following year he was chosen as a member of the team of four Oblates who were to accompany the first group of Holy Family Sisters destined for Basutoland. He was given the opportunity to spend some months in England to brush up his knowledge of English. During the journey he was the provider of the little group as far as Pietermaritzburg. He was then sent as a trailblazer to Roma by Bishop Allard, to help Fathers Joseph Gérard and Pierre Bernard with the work of finishing the house for the Sisters. He arrived on horseback on December 24, the day before ‘Ma Puleng was received as a catechumen. She was the first Mosotho convert.

From the first contact with Bishop Allard, it was clear that Father Hidien did not belong to the same school of spirituality, nor did he share the severe asceticism of the bishop. The rigidity of his superior was not at all in tune with the jovial and exuberant temperament of the young missionary. Consequently, Bishop Allard set to work to teach him his own way of living religious life and becoming a saint. This became a sort of unexpected martyrdom that the ebullient apostle had to suffer. For seven years he had to be content with manual work even though his dreams and his talents were focused on the apostolate. He awaited the hour appointed by Providence. Unfortunately, it was only six months before his death that he was able to give of his full potential among the diamond miners in Kimberley. He devoted himself to the task with an energy proportionate to the pain he must have suffered during the time when he was unable to work as he would have wished. On September 19, 1871 he wrote: “I am in a new world, and a world which requires all my time and all my strength. Three priests would scarcely be enough for the work I have to do. My hope is that I shall soon be worn out and ready for the next life.” In fact he was soon struck down by typhoid fever and he died on November 19, 1871. He was deeply mourned by all who knew him. His memory is that of a holy martyr who suffered the stress of the conflict between his own burning aspirations and the consummate prudence of his bishop. Within the narrow limits by which he was hemmed in by obedience, he was always able dedicate his efforts and find the means to render a great service to the Africans, to his community and to the Church. Father Hidien had the reputation of being a good musician. The king, Moshoeshoe, liked to invite him to play the flute in his fortress at Thaba-Bosui. He was the first Oblate to give his life for the missions in Southern Africa.