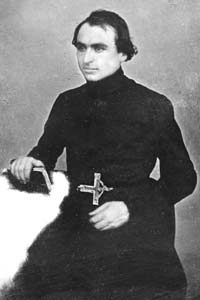 Jean Jeanmaire was born on April 2, 1827 at Gorhey in the diocese of Saint-Dié. After having begun his studies of Latin and Greek with Fr. Hennecourt, the parish priest, he entered the minor seminary at Châtel. In 1846, he made one year of philosophic studies and began studying theology at the major seminary of Saint-Dié. After hearing a talk by Father Leonard Baveux, he decided to become an Oblate of Mary Immaculate and began his novitiate in Nancy, December 7, 1848. He made his oblation in the presence of Bishop de Mazenod in the chapel of the major seminary of Marseilles where the novices had had to come because of political unrest in the north. After two years at the scholasticate, he was ordained to the priesthood by Bishop de Mazenod on June 29, 1851.

Initially, he lived at Notre-Dame de la Garde, then, in the month of August, the Founder sent “the engaging and excellent Father Jeanmaire to Nancy.” At Nancy, Father Jeanmaire began by taking care of the faithful who came to the chapel. He was soon appointed chaplain of the prisons, then, in 1855, put in charge of directing the novitiate of the Sisters of Christian Doctrine. He also took part in several parish missions. On May 20, 1855, Bishop de Mazenod wrote to Father Vincens that Father Jeanmaire is “doing the work of four men.” In an October 19, 1861 letter to Father Vincens, Father Jules Piot judged his confreres at Nancy harshly. He said that there was neither ability nor virtue among these priests. He stated that Father Jeanmaire’s preaching “has no spirit and very little impact”; he is “dry, like a Jansenist.”

In February of 1862, Father Jeanmaire received an obedience for Limoges where he preached a Lenten series and a few retreats. On March 16, 1863, he was installed as parish priest at Notre-Dame de Talence where, for thirteen years, he worked tirelessly for the good of souls and the embellishment of the shrine. After that, he often changed houses: superior at Nancy in 1876-1878, assistant priest and missionary at Autun in 1878-1879, treasurer and assistant priest at Angers until the summer of 1879, assistant priest at Tours in 1879-1880. After the decrees of expulsion of religious were put into effect in 1880, he became chaplain to the mother house of the Sisters of Marie-Joseph in Dorat, Upper Vienne.

At the time of the Oblate foundation in Lyon in 1888, Father Fabre sent him to be chaplain to the congregation of the Sisters of Africa, founded in this city by Cardinal Lavigerie. At the beginning of 1890, he began to suffer from spells of dizziness in his travels; then there were lapses of memory ever more frequent and serious. On April 30, he suffered a fall and died on May 5. In 1891, Father Lavillardière, superior at Lyon, wrote this about Father Jeanmaire: “Father Jeamaire was literally the good Israelite, a simple and upright man, obliging and easy-going. He loved solitude, prayer, the rule. He was very much a man of duty, supremely conscientious.” (Missions O.M.I., 1891, p. 413)

Oblate General Archives in Rome. Some ten letters to a few Oblates (Antoine, Fabre, Lavillardière, Rey and Sardou); two obituaries (one handwritten and the other typewritten) in which we find excerpts from Father Jeanmaire’s diary and from his letters to the Founder; those letters and the diary have since disappeared.