Joseph Thomas Joannis, the maternal grandfather of Eugene de Mazenod was born in 1717. A doctor who passed his medical exams November 26, 1736, in 1770 he was appointed to be a royal professor at the faculty of medicine at the university of Aix. He was a member of the administration of the city of Aix at the time of the Revolution. He was Eugene’s godfather at his baptism on August 2, 1782 and taught him Provençal. He died in Aix on November 9, 1795, shortly before his daughter, Mrs. de Mazenod returned to France. 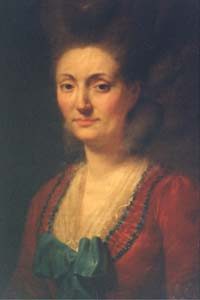 Upon his return from exile in 1802 and right up until he entered the seminary in 1808, Eugene stayed at the Joannis mansion with his mother and his sister, his aunt Dedons and her son Émile and with Mrs. Joannis whom he loved a great deal and who loved him deeply in return. (Eugene to his father, November 5, 1802, July 15 and 16, 1803) A few times, he went to spend the summer at her chateau of Saint-Julien near Martigues. From 1802 to 1811, he wrote her eleven letters and, during this period, mentions her more than one hundred times in letters to his father, his mother and his sister. She stood behind Eugene in his choice of vocation in 1808 and took it upon herself to pay for his studies in Paris.

Eugene did not come to Aix for the summer vacations of 1811 and it was then that Mrs. Joannis died on August 15. September 7, he wrote to his sister: “I am not going to begin with a description of the effect produced on me by the frightful news of the death of a person who was so dear to me, that would only needlessly increase the grief that you yourself are feeling without doing anything to lessen the profundity of my own.” (Oblate Writings I, vol. 14, no. 91, p. 200) It was only May 1, 1813 that he was able to communicate this news to his father. He wrote: “I was her beloved child and never was a mother more tenderly loved than I loved her. Consequently, her death was for me the cruellest trial that I could have endured. I never knew anyone more perfect here on earth. She was a victim both of her tenderness and her dedication to her children. She died at Saint Julien where she was alone with Emil.” In 1823, Mrs. Joannis’ body was brought back to L’Enclos near Aix. Then, in 1844, it was laid to rest in the vault of the Oblates and the Boisgelin in the cemetery of Aix. (Mazenod Diary, May 22, 1844 and April 21, 1845)