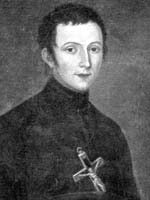 Jacques Antoine Jourdan was born at Chantemerle, near Briançon, diocese of Gap, February 12, 1798. He was son of Antoine Jourdan and Pétronille Blanchard. He entered the novitiate at Notre-Dame du Laus, September 21, 1822 shortly after his ordination to the priesthood at Digne. He made his oblation at Aix on February 9, 1823.

He died shortly after his oblation. Father Courtès, who was his superior at the time at Aix, wrote these few lines, the only ones we have on the circumstances surrounding his death: “[Father Jourdan’s] personality was gentle, shy and tended toward scrupulosity.” Father de Mazenod had written several letters to him from Paris “to bring reassurance to a conscience that was totally disoriented. The good advice offered was all in vain. The illness was making alarming progress. The person who at the time was in charge of the house at Aix, too inexperienced to tell the difference between a question of morality finding its source in mere scrupulosity and that which might arise from a mental aberration, never thought of adopting extreme measures until too late.” Bourrelier was at his bedside day and night. “One moment of inattention on the warder’s part produced consequences forever regrettable. Finally, the wretched sick man, having exhausted his moral and physical strength, died on a Sunday. Father Jourdan had the makings of a man fit for community life. Gentle and humble, he would for a long time have edified the Society by his regularity and his obedience, if his scrupulosity, too long overlooked, had not damaged his brain and destroyed a life still so young.”

Father Courtès speaks of letters from the Founder. The only one we have found is a March 30th letter designed to offer encouragement. Among other things, he says: “My dear, good Jourdan, may the peace of our Lord Jesus Christ be with you! What’s this? Could you be without this precious peace that the divine Master came to bring to the world? … Now, I declare to you in the name of God that you are in his friendship… You sadden his paternal heart only by lacking confidence in his goodness…” (Letters to the Oblates of France, 1814-1825, Oblate Writings vol. 6, no. 99. p. 108-109)

Following up on this issue, the Founder reassured the priests about the certainty of the departed one’s salvation. In a May 2, 1823 letter written from Paris to Father Sumien, he said: “What shall I say to you, my dear child, about the misfortune which has brought consternation to us all? I am dumbfounded and can scarcely believe it, but I do not share your fears about the salvation of his soul.” (Letters to the Oblates of France, 1814-1825, Oblate Writings vol. 7, no. 103. p. 112) In the same vein, he wrote to Father Tempier from Turin on May 24, 1826: “We could count on our Jourdan who was very saintly, and whose death was of a kind that could not be imputed to his will.” (Letters to the Oblates of France, 1826-1825, Oblate Writings vol. 6, no. 242, p. 101) But at the beginning of 1829, he entertained some doubts in this regard because, before dying, Father Suzanne “insisted that we do not forget Jourdan, who from Purgatory had apprised him of complaints about us. It is possible that we have not made all the intercessions for him that were stipulated later in favor of all our members.” He, then, asked all the Oblates to celebrate a Mass for the intentions of Father Jourdan. (Letters to the Oblates of France, 1826-1830, Oblate Writings I, vol. 7, no. 325, p. 177)

Father Jourdan was the first Oblate to die in the Congregation.