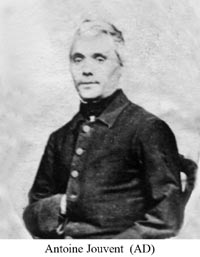 Antoine Dominique Jouvent was born in Valserres, diocese of Gap, France, on October 23, 1810. His parents were Antoine Jouvent, a property owner, and Marguerite Borel. He did well in secondary studies in the minor seminary of Gap and began his theology in the major seminary of Embrun. When he was due to receive tonsure, it seems, his directors advised him to leave. He thought of becoming a Brother of the Christian Schools (De La Salle) but, first of all, he decided to make a retreat in Notre-Dame du Laus. It was then that he decided to become a lay Brother in the Missionary Oblates of Mary Immaculate.

In 1841, when the Founder asked the Oblates for their opinion with regard to accepting missions in Canada all responded positively and Brother Jouvent requested that he be a member of the first group. He left for Canada in 1850. From 1850 to 1854 he was at Saint-Pierre-Apôtre in Montréal, then at Saint-Sauveur, Québec, from 1854 to 1862, at Montréal in 1862, in Maniwaki from 1862 to 1876 and in the Iroquois Amerindian reserve of Sault-Saint-Louis (Kahnawake) from 1876 to 1885.

Brother Jouvent was never a great manual worker. In the different communities where he lived, he looked after the sacristy and, in summer, the garden. His special interests were reading and prayer. He wrote well and had the gift of being able to speak of his interior life. He did so in some of his letters to the Founder. Some of his letters are signed “the very little Brother Antoine Jouvent”.

Fathers Nicolas Burtin and Hector Mauroit, who knew him in Canada, said that the Brother had lost his mother when he was still very young. He was reared by a severe stepmother, which caused to develop a disposition of mistrust and an acute susceptibility. He was also very much attached to his own way of seeing things especially his own mistaken piety, especially towards the end of his life. Father Burtin tells us that “Apart from the summer period when he worked in the garden, his days were divided between prayer and reading. He had made a rule of life for himself that determined how his time was to be spent and convinced himself that he must not lose even one minute. Each day, besides the rosary, he recited a number of oral prayers. When the time came, nothing, not even if the house fell, would persuade him to change his schedule. He really believed that he was serving God in this way, which does not all correspond with what our Holy Rule prescribes for our Brothers. Nobody could convince him that in this way he was shirking his duty and that there would be more merit if giving some service in the house.”

The author of the necrology note concludes with this portrait of the Brother: “An intelligence which was not lacking in quality, a brilliant imagination, a somewhat eccentric character, with an unshakable attachment to his vocation, a very deep piety, a charity with regard to God but a somewhat mistaken judgment in his relations with his superiors, his brothers or his neighbour. If it is by he heart that God judges, Deus intuetur cor, it seems that Brother Jouvent’s heart, his whole soul, has always been with God and has been spent for God. That is the depth of divine mercy.”

Towards the end of his life, Brother Jouvent was deaf and had bouts of asthma, but in general he seemed to enjoy good health. A cough and stomach pains of which he complained in January 1885 did not cause concern. On the morning of February 9 he was found dead at the end of his bed. His remains were, first of all, brought to Lachine and today he is buried in the Oblate cemetery in Richelieu.