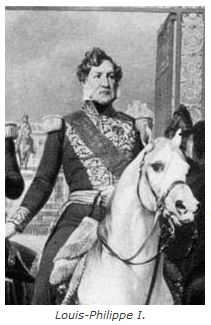 What is referred to as “the July Monarchy” is a period of French history that extends over the reign of King Louis-Philippe of the House of Orleans and covers the time of July 1830 to 1848.

King Louis-Philippe was never very popular with the Catholic population of France. When he seized the crown from King Charles X, events occurred which deeply wounded the religious sensitivities of Catholics: the church Saint-Germain-l’Auxerrois was profaned, Paris was sacked, and mission crosses pretty well all over France were destroyed, even those which had no significance at all as a “legitimist” (as those loyal to Charles X were called) symbol. It was not that the new Government wanted to persecute; nevertheless, it took into account the fact that it owed its position to a strong anti-clerical movement and also that the Church was not favorably disposed towards it. Thus, it was not disposed either to heap favors upon the Church. The clergy, for its part, remained attached to Charles X. The ideal of the “Carlists” and that of the Catholics (often linked to a person) were closely similar. The political Carlists were using religion as a political instrument and, likewise, many of the clergy could be reproached with exercising a “legitimist” activity and influence.

Like his uncle Bishop Fortuné and many other bishops, Eugene de Mazenod did not hide his own hostility towards the new monarchy. Pius VIII’s decision of September 25, 1830, recognizing the new Government dismayed a great number of people. The beginning of Louis-Philippe’s reign was marked by countless difficulties, misunderstandings and clashes between the ecclesiastical and the local civil authorities. During the first years of the July Monarchy, the prayer for the King was either omitted, or the King’s name was included in the prayer but not in the versicle/response that preceded it; the celebration of the King’s feast would be without any solemnity; some priests even went as far as to preach against the new state of things.

Eugene de Mazenod was accused of being at the origins of certain anti-Government activities. However, there has never been any evidence produced that he ever took part in “legitimist” meetings, nor were there any grounds that could be used to proceed against him judicially. It cannot be denied, however, that he had a manifest antipathy for the July Monarchy. The reasons for this attitude is that the July Monarchy was installed by a revolutionary coup that overturned the legal order of things and, furthermore, this Monarchy also showed itself hostile to religion.

In 1832, the Government introduced a “policy of appeasement”. It saw the need of making some concessions to the Church, lest the latter became too hostile to it, and yet of retaining the possibility of controlling the Church.

The domain in which the new policy became most evident was in episcopal appointments. The first bishops appointed under the new regime were really quite disastrous: the determining factor in their appointment had been support for the new Government. From 1832 onwards, there was more concern for the qualities of piety and moral conduct; and, where explicit sympathy for the regime was not evident, the Government was content with a candidate’s neutrality in this regard. In 1834, the Minister of Worship, Persil, went further: in a highly confidential letter to the bishops, he asked them to nominate for their respective dioceses three candidates who “seemed to them to possess in the highest degree the qualities of piety, doctrine, a spirit of wise tolerance and other eminent qualifications” that the episcopal dignity required. This was a show of confidence to which neither Rome nor the French episcopacy remained indifferent and which, as events proved, had some happy results.

For Eugene de Mazenod, however, reconciliation with the Government would take a few years longer. In 1832, he had been ordained bishop in partibus without the authorization of Paris. This ordination resulted from an initiative taken by Bishop Fortuné de Mazenod at the Holy See. His purpose was to safeguard the existence of the see of Marseilles which the municipal council wanted to have suppressed upon his demise. If his vicar general – that is, our Founder – were a bishop, he could, in the event of the see being vacant, more easily administer the diocese as capitular vicar. If the capitular vicar were a bishop, then the administration of the diocese would not suffer too much. Pope Gregory XVI decided to go along with this scheme and on October 3, 1832, Eugene de Mazenod had in hand a brief which named him Bishop of Icosia in partibus infidelium and Apostolic Visitor of Tunis and Tripoli.

The French Government suspected that this latter appointment was made only to parry the objections that Paris would make once it learned that the episcopal ordination had taken place without its prior permission. Mr. Thomas, in fact, the Prefect of the Bouches-du-Rhône, set himself up as the accuser of the new bishop. In a report of June 1833, he for the first time alluded to Carlist meetings which Bishop de Mazenod was supposed to have instigated. From that moment onwards, the Pope was being pressured to remove from Marseilles a vicar general who had been appointed Apostolic Visitor to Tunis and Tripoli. The chargé d’affaires in Rome received instructions that he insist that the Holy See recall Bishop Eugene de Mazenod to Rome in order to put an end to his political agitation and to prevent the scandal that could be caused by the counter-measures that the political authorities would be forced to take.

The Founder was called to Rome for consultation. He was able to explain his attitude and activities to the Pope’s satisfaction and, from the French embassy, he learned that the French Government’s objections against him were above all of a political nature. In this context, with the consent of the Roman Pontiff and the Roman Curia, he decided to return to Marseilles so that he could defend himself there against these accusations. The French Government, which had been listening to rumours that emanated from anticlerical quarters, even considered him to be the leader of the Carlists in Marseilles. It would have been easy for him to defend himself: in spite of all his personal sympathy for the Bourbons, he could easily have proven that the accusations of legitimist activities were groundless.

He returned to Marseilles on December 11, 1833. On August 12, 1834, Bishop de Mazenod learned that by official writ of August 10th, his name had been removed from the electoral lists. Confronted with this fact, the Vicar General had a double alternative: either do nothing and then run the risk of being perpetually expelled, or introduce a court action to clear his name. He chose the latter.

Then came a message which crushed him. Fearing lest the relationships between the Holy See and the French Government would deteriorate over this affair, Rome did not at all agree with Bishop de Mazenod’s choice. The latter informed the Minister of Worship that he withdrew the appeal that he had already legally called for.

At this critical moment a person intervened and undertook the difficult task of reconciling the Bishop of Icosia and the French Government. It was Father Guibert, an Oblate, the future archbishop of Paris, at the time superior of the major seminary of Ajaccio. He was in Paris during the second half of July 1835, seeking Government funds for his major seminary. He took the advantage of his stay in the French capital city very diplomatically to focus the conversation on Eugene de Mazenod’s painful situation. The interview with Mr. Schmitz, the Director of Worship, was bold but resulted in success.

The point on which Mr. Schmitz insisted upon to no end was that the Government needed assurance that the Bishop of Icosia was not hostile to it. Father Guibert’s reply was that the Government disposed of a sure method to put Bishop de Mazenod to the test in this regard: the Government should appoint him to be a suffragan bishop and thus he would be obliged to take the oath of loyalty. The Government would gain by this and the legitimists of Southern France would feel beaten at their own game.

Now it was a matter of convincing the Bishop of Icosia, and that was no easy matter. It had to be made plain to him that the Government had come a long way from its original position and also that the Minister’s position was extremely delicate. Fathers Guibert and Tempier had to insist greatly with the Founder before the latter gave a sign of fidelity to the July Monarchy.

The Government first acknowledged his title as Bishop of Icosia; thereafter, it reinstated him as a French citizen. Finally, after a great deal of hesitation, it named him coadjutor to Bishop Fortuné de Mazenod. Once the latter had resigned, Bishop Eugene de Mazenod succeeded him in the see of Marseilles.

In spite of the rapprochement between the Bishop and the civil power, their relationships were never cordial. There were tensions and friction nearly every year, a sign that the interrelationship was not exactly friendly. Both sides remained mutually apprehensive. The Government complained that the Bishop of Marseilles was somewhat negligent in his patriotic duties; Bishop de Mazenod, for his part, often complained that the Government was meddling in spiritual affairs and tended to reduce the bishops to mere Government employees. This kind of relationship persisted unchanged until the 1848 revolution broke out and resulted in the abdication of Louis-Philippe.

How did the Oblate Congregation fare during the July Monarchy?

The vicissitudes experienced by the Oblate houses in 1830 varied from place to place. The houses at Aix and Notre-Dame du Laus weathered the tempest without any great damage. At Marseilles there was some agitation around the house of Le Calvaire. The municipal administration had asked Father Tempier that the diocesan authorities themselves remove the mission cross and put it to safety inside the church. Gangs of young people tried to destroy it, but militant Catholics managed to have it kept where it stood. The house of Nîmes was a victim of the revolution. The hostility against the missionaries was such that they saw fit to let this house go.

During the course of the several weeks that the revolution lasted, parish missions were interrupted. When they were allowed again, the doctrinal question, which had already occasioned different viewpoints during the period of the Restoration, again arose and caused more serious conflicts. The problem was especially Jansenism and its implications. The Founder had opted for the ultramontaine theses of the probabilists that followed Saint Alphonsus of Liguori. In the diocese of Gap, where Notre-Dame du Laus was located, Bishop Arbaud was a declared Gallican and an utter rigorist. He forbade the Oblates to hear confessions during the Paschal season. When the superior of the house, Father Guibert, tried to bring home to him that the obligation of going to confession at Easter went against the Apostolic Constitutions of Pope Benedict XIV and of other Popes, the Bishop asked the missionaries to leave Notre-Dame du Laus. This matter dragged on until 1841-1842.

The Rule, approved by the Holy See in 1826, received a slight change in 1843: the General Chapter would from henceforth be called only every six years. This change was approved by Pope Gregory XVI on March 20, 1846.