The mission of Notre-Dame des Victoires is situated 200 kilometres northeast of Edmonton. It was founded by Father René Rémas in 1853. The land is fertile and two rivers (Beaver and Athabaska) ensured relatively easy communication with the missions in Île-à-la-Crosse and Athabaska. That is why Notre-Dame des Victoires became a depot and supply centre for the missions of the north. Fathers Jean Tissot and Augustin Maisonneuve, together with Brothers Joseph Salasse and Patrick Bowes who arrived respectively in 1855 and 1857, were put in charge of this task. They cleared the land, built a house and a chapel, a convent and a boarding school to be run by the Sisters of Charity from Montreal, starting in 1862. They also made a roadway in the direction of Fort Pitt to the south. 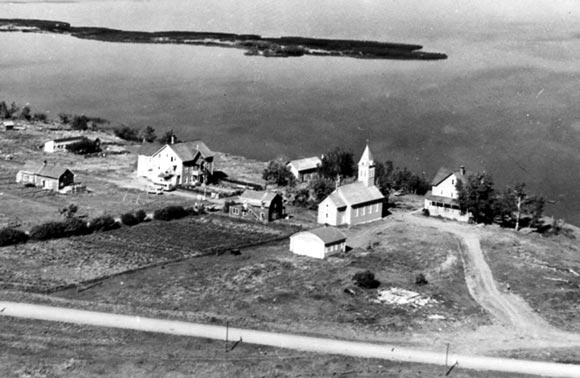 Fathers Maisinneuve and Tissot often complained about Bishop Taché. On December 13, 1859, Bishop de Mazenod wrote to them singing the praises of their new superior, Bishop Grandin, coadjutor to Bishop Taché. He added: “I congratulate you, therefore, on having such a superior and all that I ask is that you live in perfect agreement with him in all the dealings you will have together”.

In 1868 the mission was frequented by about 500 half-breed Catholics and also by Cree Amerindians, most of whom were still pagans. In a report of the year 1873 on the Athabaska-Mackenzie vicariate, we read that the mission of Notre-Dame des Victoires belongs to the diocese of Saint-Albert but, since 1869, it had been placed under the religious jurisdiction of the Mackenzie mission vicariate as a procure for the missions of the north. It had sufficient “boarding facilities”; it had cultivated fields, numerous horses and a large number of cows and steers, a flourmill and a saw. It was in this mill that Brother Anthony Kowalczyk broke his arm and it was so mutilated that it had to be amputated some days later. Some years earlier, about June 20, 1875, Brother Alexis Reynard was on his way to Great Slave Lake mission in the area of Lac-la-Biche, to save an orphan girl, when he was killed and eaten by his Iroquois guide.

The Fathers visited the outposts of Saint-Valentin, Petit-Castor, Saint-Jean-Baptiste and Fort Pitt. The mission, which at the beginning belonged to missions of Saint-Boniface, was attached to Athabaska-Mackenzie in 1864, to the mission vicariate of Saint-Albert in 1899, to Alberta and Saskatchewan in 1906, to the Province of Alberta-Saskatchewan in 1921 and to Grandin Province in 1985. Bishop Faraud had his residence in this mission from 1869 to 1889. Father Victor Le Goff was missionary and director from 1903 to 1927. At the beginning of the twentieth century it became of less importance because the boarding school had been rebuilt in the Indian reserve of La Salle. Besides, because communications had developed, it was not so necessary as a supply post for the Mackenzie missions. In 1905 the Daughters of Jesus opened a school in the mission of Notre-Dame des Victoires for the white children of the region. In 1921 the church was destroyed by a cyclone and rebuilt. The Oblates left in 2002.