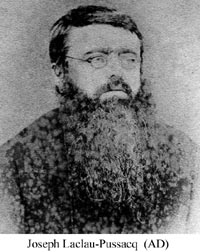 Joseph-Marie Laclau-Pussacq was born in Arrive, diocese of Bayonne, France, on February 24, 1833. After studies in the college of Saint-Palais and his novitiate in Notre-Dame de l’Osier, which he began on November 12, 1852, he took vows in Marseille on November 13, 1853. The novice master wrote about him in November 1852: “Pussacq, aged 19, has done his secondary studies with sufficient success. He seems to enjoy good health but a number of the members of his family have suffered from tuberculosis, which seems to be hereditary. Charming in character, very straightforward, is docile and has good will. He accepts correction joyfully. He has overcome courageously the obstacles to his vocation. He has entered into the spirit of the novitiate and its devotions. His talents are satisfactory.”

He did his scholasticate in the major seminary of Marseille (1853-1854), in Sicklinghall (1854-1856) and Montolivet (1856-1857). In 1856 Father Antoine Mouchette, moderator of scholastics, considered him to be “an excellent religious, very punctual, original … excellent for everything”. Bishop de Mazenod ordained him priest on December 20, 1856 and gave him an obedience for Ceylon, where he arrived in April 1857.

A short biography has this to say about his personality: “His great fidelity to our holy rules, a copy of which he always carried about with him, had left an unusual stamp on his character and made him seem sometimes, perhaps, somewhat unbending to those who had a only a superficial acquaintance with him. For him there could be no question of betraying principles… But with all that strength of character, Father was far from being puritan. Nobody knew better than he how to put into practice in the midst of his community that recommendation of the Apostle: Gaudete! His gaiety was natural and contagious like that of a child and, now that he is no longer with us, many of the significant traits of that joyous character will continue to circulate among those who knew him.” (Missions OMI, 45, 1907, pp.404-405).