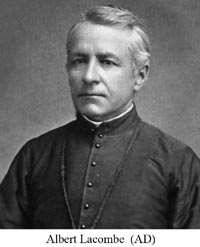 Albert studied at Assumption College and was ordained priest in Saint-Hyacinthe on June 13, 1849 by Bishop Bourget of Montreal. The young priest set out immediately for the Canadian west and ministered at Pembina, North Dakota (1849-1851) with Father Georges Belcourt. He then returned to Montreal and was appointed assistant priest in Berthier (1851-1852)

In March 1852 he offered his services to Bishop Alexandre Taché, o.m.i., newly-appointed auxiliary of Saint-Boniface. He accompanied the bishop to Red River. He was never again to leave the West and throughout his life he worked in the dioceses of Saint-Boniface and Saint-Albert where he was vicar general to two bishops. In 1852 Father Lacombe arrived in Edmonton and spent a part of the winter (1852-1853) among the Cree Indians and half-breeds at Lac-la-Biche. He then spent the winter at Fort Edmonton (Fort-des-Prairies or Saint-Joachim). In 1853 he resided at Lac-Sainte-Anne and, then, in 1855 he undertook a long journey that took him to Little Slave Lake (Grouard) and Peace River.

He began his novitiate at Lac-Sainte-Anne on September 23, 1855 and took final vows on September 28, 1856. In 1858 he founded the mission of Saint-Joachim in Fort Edmonton and ten, in 1861, he joined Bishop Taché to determine the site of a new mission: Saint-Albert, Alberta, which bears his own name. In 1863 he left the mission at Sainte-Anne where he had resided since 1853 and went to live at Saint-Albert and, in 1864 he received the mission to evangelize the Cree and Blackfoot Amerindians. That was how he came to travel the length and breadth of the Prairie from 1865 to 1872. In 1875 he founded the mission of Saint Paul of the Crees (Brosseau), Alberta, which was to become the first effort at establishing an Amerindian colony in the West. At the same time he acted as peace maker between the Crees and the Blackfoot. He also opened, in 1863, the first flour mill in Saint-Albert, the first west of Winnipeg and he outlined a chariot road from Red River to Saint-Albert. He also built a bridge on the Sturgeon River 1862, the first in that part of the world. He visited Fort-de-la-Montagne (Jasper) at least in 1865, 1866 and 1871.

When an epidemic of smallpox broke out 1871he was appointed to the health bureau for the planes region of the Northwest Territories. The following year, 1872, he became vicar general of Saint-Albert and then, in 1873, he represented Bishop Taché at the Oblate general chapter. On his return, he was appointed Pastor of Sainte-Marie in Winnipeg (Fort Garry) and given the responsibility for the colonisation of Manitoba. He was pastor for two periods: 1874-1876 and 1878-1880.

At the request of Bishop Taché he went to Eastern Canada and to the United States, in 1875, to prepare his work of colonisation. In 1879 he was again the delegate of Bishop Taché at the general chapter and afterwards he was appointed vicar general of Saint-Boniface (1879). From 1880 to 1882 Father Lacombe ministered to the pastoral needs of the workers on the Canadian-Pacific railway with headquarters at Kenora (Rat Portage) Ontario.

In 1882, he left Winnipeg for the diocese of Saint-Albert and took over responsibility for the district of Calgary where he was superior from 1882 to 1886 and pastor of the newborn town (1883). In 1884 he founded and became principal of the Indian school in Dunbow (De Vinton, High River), Alberta, an appointment he received from the federal government (1883). In that same year he was intermediary between Canadian Pacific and the Blackfoot Indians who objected to having the railway pass through their reserve. The success of those negotiations earned him the honour of becoming, for one hour, president of the powerful company and he benefited from their generosity for the rest of his life. From that time onwards he lived habitually in the region of Calgary although he was continually travelling on various missions entrusted to him by the government or by his ecclesiastical superiors. He was principal of Dunbow School in 1884-1885 and from there he visited Pincher Creek in 1884, Okotoks and Medicine Hat in 1885. Afterwards, he lived in Fort MacLeod (1887-1889) and Calgary (1883-1886, 1893, 1897).

In 1885 he played an important role in pacifying a large number Amerindian tribes. Especially the Blackfoot at the time of the rebellion and he did so at the express request of the Canadian prime minister. In his position of responsibility for the Blackfoot he lived part time in Fort MacLeod and part time in Pincher Creek (1884-1885, 1889-1898). In 1893 he opened a hospital at Blood Reserve (Stand Off or Cardston), then a school in 1898. He was also a member of the Board of Education for the Northwest Territories (1886-1892) as well as being pastor of Saint-Joachim in Edmonton (1894-1897). He built a chapel in Strathcona (Edmonton) in 1895 and played a major role in the schools question for the West during that period.

Father Lacombe was particularly interested in founding the half-breed colony of Saint-Paul-des-Métis (1895-1905). He also accompanied the government commission appointed to make a treaty with the Amerindians of Athabasca and Peace River (1899). Then, in 1900 and 1904 he travelled to Austria where he met the emperor Franz Joseph and to Galicia where he went to deal with the question of the religious interests of the Galician emigrants in Canada.

In 1902-1903 he was again placed in charge of Calgary, while in 1904 we find him in Pincher Creek to which he gave the name “My Saint Michael Hermitage”. He spent long years there. Nevertheless, he was director of Medecine Hat in 1905. He was present at another general chapter in 1906 and at the plenary council of Quebec in 1909. He also found time to organise a hospice for the aging in Midnapore. It was to be called The Lacombe Home and that is where he lived from 1909 to 1916.

Indians from all the tribes venerated him as one of their own. Not only was he a father to them but, as the Blackfoot chief Crowfoot said, they saw him as truly their brother. Their name for him was “The good-hearted man”, while the faithful of Calgary called him “our old sage”. There are many geographical entities and quite a number of monuments and historical sites that bear the name of Father Lacombe. For instance the Chateau Lacombe in Edmonton. He died at Midnapore, Alberta on December 12, 1916 and is buried in the crypt of the church in Saint-Albert.