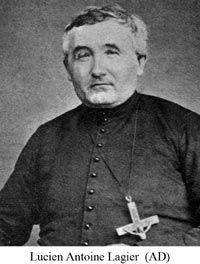 After receiving a classical education at the “juniorate” of Notre-Dame-de-Lumières, Vaucluse; and the Petit Séminaire of Embrun, Lucien-Antoine Lagier followed his brother Jean-Marie and on August 14, 1834 entered the novitiate of the Oblates at Saint-Just, near Marseilles. On 25 May 1839, his theological studies completed, he was ordained priest there by Charles-Joseph-Eugène de Mazenod, bishop of Marseilles and founder of the Oblate fathers.

Lagier worked for two years in France, then joined the first group of Oblates to land at Montreal, on 2 Dec. 1841. He became the curate at Saint-Hilaire-de-Rouville and guardian of he cross that had been erected on Mount Beloeil (Saint-Hilaire) in memory of the great retreat preached by Bishop Charles-Auguste-Marie-Joseph de Forbin-Janson, which was destined to become a place of pilgrimage. At the same time he continued his ministry in the Eastern Townships, where he served until 1843.

Father Lagier, who had been a preacher since his arrival, then spent some years at Longueuil, and after that resided at Montreal; in 1847 he stayed some time at Bytown (Ottawa) to give a helping hand to the confrères during the typhus epidemic. In 1853 he went to Detroit, Michigan, to found a residence there, but returned to Canada shortly afterwards. In 1858, at the request of Anthony O’Reagan, bishop of Chicago, he worked in association with Father Augustin Albert Brunet in the area of Kankakee, Illinois to combat the heresy that Charles-Pascal Télesphore Chiniquy was spreading there. As a result of the preaching done by the two Oblates, about 150 schismatics returned to the practice of the Catholic religion. On his return to Canada, Lagier continued his preaching and lived at Quebec from 1863 to 1868. In that year he helped to found the first French parish of Lowell, Mass.

His ministry was always sought after, for he was prudent, a good judge of men, and a preacher of distinction. During his 32 years in the missions he conducted more than 1,000 retreats. His death occurred during a mission at Isle-Verte; he was the only one of the first groups of Oblates to die in Canada.