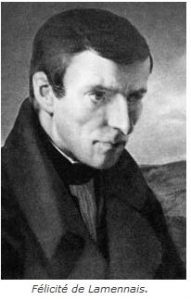 Félicité de Lamennais was born at Saint-Malo on June 19, 1782. A premature birth, he was always sickly, nervous and highly sensitive. He had hardly attained his fifth year of age when his mother died. As a result, he lived at La Chênaie with his aunt des Saudrais. It was his uncle des Saudrais, a deist of the school of the philosophers who was tainted with paganism who took in hand his education and threw open his library to the child.

One day, Félicité read Génie du Christianisme; he rediscovered his faith, he unburdened himself to his brother Jean Marie who was a priest and, at 24 years of age, made his First Holy Communion. He wrote a few works and prepared himself for ordination to the priesthood. He was ordained to the subdiaconate at the seminary of Saint-Sulpice on December 23, 1815 and was ordained to the priesthood at Vannes on March 9, 1816, but he later admitted to his brother that he was unhappy.

In 1817, Félicité wrote L’essai sur l’indifférence. The repercussions triggered by this book were enormous. The youth and the clergy turned to him as if he was an incarnation of militant Catholicism. Soon disciples began to gather around him such as Gerbet, Rohrbacher, Lacordaire, Montalembert, etc. Father de Mazenod held Lamennais in high esteem. He especially appreciated his ultramontain spirit. Several Oblates shared this enthusiasm, especially Fathers Touche, Courtès and Guibert. In his January 18, 1826 diary entry, the Founder wrote that, in Rome, the most prominent men admired Lamennais. The ultramontanism as expressed in the second volume of L’essai sur l’indifférence which appeared in 1820 offended the Gallican clergy. In his work, Des progrès de la révolution et de la guerre contre l’Eglise, Lamennais clearly exposed his ideas on liberalism. This soon stirred up against him the bishops and a portion of the clergy.

On October 16, 1830, Lamennais and his collaborators founded the journal L’Avenir as an instrument to broadcast their ideas. The Founder immediately took a stand opposing the theme of separation of Church and State that the journal was promoting. He did not want the Oblates to subscribe to this journal. “I would be devastated if anyone of our members would subscribe to this hare-brained nonsense,” he wrote. (REY I, p. 495) In the acts of the 1831 General Chapter, we read this: “It is forbidden to receive in the society any journal that is not approved by the Superior General, notably L’Avenir because of its political tenets.” Father de Mazenod then remained on the alert to prevent Lamennais’ theories from gaining a foothold in the Congregation.

The Founder did, however, make a distinction between the tenets that he rejected and the man whose talent he admired. In 1831, an anonymous letter distributed in Aix accused Lamennais of being a sectarian who wanted to crush the episcopacy. Lamennais wanted to defend his reputation and asked Father de Mazenod for information. Father de Mazenod made his investigations and swiftly responded in an April 7, 1831 letter: “Your reputation belongs to the Church because you are a priest and an apologist for its teachings; you are the most prominent apologist of our day and the most formidable force opposed to error.”

In the face of an ever strengthening opposition to his ideas, Lamennais announced in the last issue of L’Avenir, the issue of November 15, 1831, that he was leaving for Rome in order to submit his teaching to the judgment of the Sovereign Pontiff. He traveled through Marseilles and was received at the bishop’s house along with his two companions: Lacordaire and Montalembert. There again Father de Mazenod made a distinction between the man and his ideas. On December 3, 1831, he wrote a very fine letter of recommendation to Cardinal Pacca; it was the only letter of recommendation the three carried to Rome. Among other things, we read: “M. de Lamennais is leaving for Rome […] I do not share all his ideas, but I know his virtue, his simplicity, his devotion to the Holy See. As well, I do not hesitate to vouch for his submission to the will of the head of the Church. He is going to Rome and he is not unaware of the unfavourable biases that have arrived ahead of him in the holy city. But bolstered by the righteous intentions of his thoroughly Catholic soul, he does not fear submitting to the test they have prepared for him. I thought that a man so justly celebrated was worthy of Your Eminence’s patronage, you whose shrewd eye can discern and weigh merit in spite of the few clouds that could have given many people a jaundiced view of him. Please, be so kind as to receive Mr. Lamennais and his words that are the expression of his soul will convince your Eminence better still than my pen that Your Eminence can feel free to present him to the Holy Father as a respectful, docile son who asks for nothing better than to show that his obedience can equal in height and breadth the height and breadth of his fame.”

In Rome, Lamennais waited for weeks before being received by Gregory XVI. In the audience finally granted him on March 13, 1832, the Pope said nothing about L’Avenir and its teachings. But a commission was at work and in the encyclical Mirari vos of August 15, 1832, the Pope alerted people to the peril of certain of Lamennais’ ideas without mentioning him by name. Already on August 18, Father de Mazenod was writing to Canon Cailhol: If Lamennais does not want to submit, he will be for us “sicut ethnicus et publicanus” because the truth is to be found in the teachings of the head of the Church.”

On September 10, 1832, Lamennais and his collaborators signed a declaration of submission. On August 4, 1833, he communicated to the Pope his decision to withdraw from public church life. One after another, his friends left him. On April 30, 1834, there appeared Paroles d’un croyant, a work heart-rending for its love and its hatred, for its prayers and its blasphemy. He was swiftly condemned by the encyclical Singulari nos of June 25, 1834. Lamennais’ break with the Church had finally occurred. He continued to write, treating of politics and died impenitent on February 27, 1854.

Bishop de Mazenod mentions him very rarely after 1832, except in a few letters to the Pope and to the Minister of Public Worship to give some explanations about a few priests from Marseilles who are still followers of Lamennais and in rebellion against the bishop. (Jonquier, Jonjon, Vidal and Blanc). According to Father Rey, in 1844, the Founder had written that he prayed every day for Lamennais’ conversion and maintained that “in spite of all his blasphemies, he was never able to uproot faith from his soul.” (REY II, p. 175)