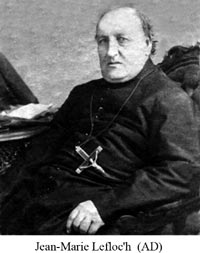 Jean-Marie Le Floc’h was born on March 27, 1823, in Kustans, in the municipality of Ployennec, diocese of Quimper, France. His parents were Jean Le Floc’h, a farmer, and Marie-Anne Letymen. He studied at the minor seminary of Pont-Croix (1840-1846) and entered the major seminary in Quimper in 1846, but had to interrupt his studies for health reasons. He became a tutor in a chateau and a studies master in the college of Lesneven. Having tried out his vocation in La Trappe, he returned to the major seminary (1852-1853), then entered the Oblate novitiate at Notre-Dame de l’Osier on October 31, 1853, together with Joseph Lestanc and François-Marie Camper. Because of his violent temper and imperious attitude, he was a cause of concern to Father Vandenberghe, the novice master, who wrote to Father Antoine Mouchette, moderator of scholastics, on November 2, 1854, before sending the candidate to the scholasticate: “Le Floc’h is the one who causes me most concern. Good qualities are mixed with great defects. I would put it this way: he has a religious mentality in the sense that he is flexible in the hands of the master, but, on the other hand his character is overbearing and imperious which makes it difficult to put up with him. He has not much interiority, is often vulgar in his conversations. His passions are very lively. On the other hand, he seems to have much good will; he is very dedicated; he would be good at parish missions. Will he be able to acquire a greater piety? My dear Father, I believe that this needs to be examined.”

He did one year of scholasticate in Montolivet, took his final vows on December 8, 1854 and was ordained priest by Bishop de Mazenod on June 24, 1855. In his report of 1855, Father Mouchette wrote: “Le Floc’h: generally punctual, but too careless, he is unable to control his tongue .. just the same, I do not find him to have as many faults as the novice master seemed to think he had.”

This is what is written in his necrology notice: “Among the human imperfections with which God left him to humiliate him, Father La Floc’h had a mania for criticism … He was liberal in the criticism of his brothers, of his superiors the same as the rest, or perhaps more than the rest …but he was a man of great faith. It was this spirit of faith that brought him to religious life and to the faraway missions. His spirit of faith caused him to overcome obstacles, to subdue a character which was rigid and proud; this spirit of faith made him a man of the Rule, a religious who was faithful to even the smallest exercises of every day.”

Struck with paralysis in Quebec in September 1882, he suffered much over a period of many years. On December 15, 1887, he entered the Sacred Heart Hospice in Quebec and there he died on January 28, 1888. He is buried in the Oblate cemetery of Jésus-Ouvrier.