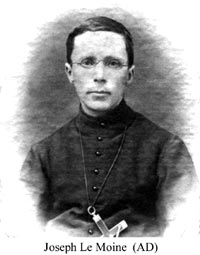 Joseph LeMoine was born on November 1, 1833, in Plourin, in the district of Morlaix and the diocese of Quimper, France. His parents were Guillaume Le Moine, paper maker, and Jeanne Thépot. He studied at the college of Saint-Pol-de-Léon, then at the minor seminary in Pont-Croix and the major seminary in Quimper. He entered the novitiate at Notre-Dame de l’Osier on October 14, 1855 and there he pronounced his final vows on October 15, 1856. Father Vandenberghe, in his report, has nothing but good to say about this novice. Before sending him to Marseille in September 1856, he wrote: “Le Moine has done a year of theology and he feels attracted to the foreign missions; a model novice, very open, sincere piety; he is modest, an amiable character, completely submissive,” The candidate studied theology at Montolivet (1856-1858) and was ordained priest by Bishop de Mazenod on June 27, 1858. At the beginning of his ministry he was socius to Father F.X, Guinet in the novitiate at Nancy (1858-1859). After one year’s rest at Notre-Dame de Talence, Bordeaux (1859-1860), he was professor in the juniorate at Notre-Dame de Lumières from 1860 to 1867. Written after his name in the Personnel register of 1862, we find the following: “Small in build, thin, weak. Health not too strong. His piety and virtue are exemplary. He has been for a while in the novitiate in Nancy and in other ministries. His size is not in his favour and, as well, he is shy.”

The author of his necrology note wrote the following, among other things: “The spirit of the Congregation was lived at its highest level in the life of our dear Father Le Moine. He felt himself strictly obliged to become a saint. And the awareness of such an elevated obligation aroused his fervour. The career of ministry in the apostolate was closed to him because of the feebleness of his temperament and so he plunged with all the energy of his will power into the vast field of the interior life. It was in this vast theatre of the victories of grace that his virtue could flourish at ease and he could exercise his generosity at will. From his personal writings and retreat notes we see that he was hungry for perfection.”