The revival of a Catholic mission in the ancient port of Leith after the Scottish Reformation was begun by Scottish secular priests in the years 1827-1859. “In November 1847 Fr. Thomas Carlyle was appointed by the Bishop resident priest in Leith. That appointment marked the beginning of our parish as we know it.” (Maureen Gillon, Stella Maris, January 1990.) It was not until 16 November 1937 that the Leith Mission was canonically established as a parish. (De MazenodRecord, 1938, page 50)

Fr. Carlyle purchased the Balmerino House and grounds in 1848 as the site for a church and schools. On 25 March 1852 Bishop Gillis laid the first stone of the church whose original design seems to have been based on drawings made by A.W. Pugin shortly before his death that were handed over by his son E. W. Pugin to J. A. Hanson for execution. Still incomplete and burdened with a large debt, it was solemnly opened on 12 February 1854. It was dedicated to Our Lady Star of the Sea. Fr. Archibald McDonald said the first Mass in the new church.

The mission is confided to the Oblates
Overtures for the Oblates to go to Leith to establish a mission centre had already been made by Bishop Gillis in 1852, and Frs. Cooke and Dutertre went to Leith for a few months in 1852/3 before the decision was taken in February 1853 to assume an alternative mission in Galashiels. A secular priest Fr. Archibald McDonald was appointed to Leith by the Bishop. In 1859 however when the Oblates reluctantly decided to leave Galashiels, Bishop Gillis persuaded them to assume the mission in Leith, although the Oblates were experiencing a shortage of personnel.

The Oblates took possession of the mission in 1859. Fr. Noble was named superior. His name appears for the first time in the church registers on 17 March of that year, followed by James Gubbins on 6 July and Fr. Simonet on 17 July. In 1860 the register shows the names of Frs. Noble, Hickey and King.

The people were poor and the quality of housing was bad. Anti-catholic feeling was intense. About 2000 of Leith’s population of around 40,000 were Catholics (Missions OMI 1862, p.19.). Religious practice was weak. Following the pastoral plan that was proving fruitful in the newly-opened missions in Liverpool and Leeds, Fr. Noble first set about establishing a school, the direction of which would be confided to Sisters, and establishing sodalities. 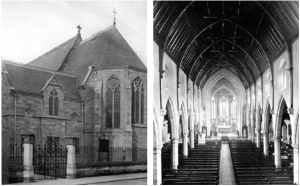 Working together, the Sisters and the parish built up schools for the children of the parish and engaged in many works of ministry. In 1881 the Catholic Day School had an average attendance of 450. As the Catholic population continued to grow, school accommodation was increased in 1897 by Fr. O’Carroll, in 1902 by Fr. Callan and again in 1910 by Fr. Callan. A flourishing junior school exists today. The Sisters wound up their ministry in the parish in 2003.

Parish life develops
Parish life expressed itself through a number of associations: a conference of the Society of St. Vincent de Paul, the Guild of the Sacred Heart, the Catholic Young Men’s Society, Fr. Ring’s Confraternity of the Immaculate Conception, the Women’s Sodality and the Legion of Mary. Through the schools and these associations, which both encouraged regular religious practice and promoted a vigorous social life, a thriving Catholic community was established. An Oblate wrote in 1957; “The big occasion for the C.Y.M.S. and the Boys’ Guild is the first Sunday of the month. With 280 members the Leith Branch of the C.Y.M.S. is by far the largest in Scotland, and visitors to Leith are always very much impressed with the large number of men who walk in the monthly procession of the Blessed Sacrament. It is indeed an edifying sight, this monthly procession; and often, when, at the end of the service, I have heard this grand congregation of men and boys singing with all their hearts “Faith of Our Fathers”, I have felt that all is well with Leith.”

The parish had developed and presented a bright picture in the 1950’s: “The majority of the men are dockers or employed in some work in the docks. Many of the women folk work in the ‘Bonds’ – warehouses in which the world-famous Scotch whisky is bottled and stored. A large number of both men and women are engaged in the biscuit industry and in rope making. In these days of full employment, the people are certainly prosperous. Generally speaking, their homes reflect their material prosperity, being well furnished and well kept. On the spiritual side, the vast majority are staunch, practising Catholics, well-instructed in their Faith and generous in its support…” (“Life in Leith”, De Mazenod Record 1957 pages 14-16.)

Soon after this however a depression in the docks led to loss of employment and schemes of housing redevelopment gave the neighbourhood a run-down appearance. Housing projects had begun in Leith as elsewhere in the country in the 1930’s and led to a serious depletion in the Catholic population.

New life and pastoral directions
Well as the societies served the parish needs over many decades, the parish historian noted that in the wake of Vatican II smaller, more focussed groups would develop such as the Over 60’s Club, the Theatre Circle, and the Bible circle which complemented the still existing sodalities. (Maureen Gillon) The youth club was reborn in 1987 as the Stella Maris Youth Club, open to all young people in Leith and sustained by a succession of Oblates in the following years. The parish participated in the Parish Renewal Programme inaugurated by the Archbishop in 1987 which extending over several years and led to the development of new parish structures and ministries. With a new parish council, four groups of lay work were established: Church Ministries, Church Servicing, Parish Caring and Parish Social and Religious Groups. On 23 August 1993 the first Parish Representatives Assembly took place. Today special ministries of the parish clergy include prison chaplaincy, school chaplaincy, and a chaplaincy to seamen.

Commemoration of the 150th anniversary of the parish in 2004 was begun with a Holy Week parish retreat and ended with a celebration of the gifts of the parish on Pentecost Sunday. A Mass of Thanksgiving was celebrated on May 21 by Cardinal Archbishop Keith Patrick O’Brien.

Church and presbytery
The church was enlarged with the addition of a new north aisle in 1900 and given a new East-facing sanctuary designed by Peter Paul Pugin in 1911.

In the 1870’s and 1880’s the church was given what is now regarded as ‘important glass work’, from the firm of Barnett of Leith.

On the occasion of the centenary of the opening of the church in 1954 it was consecrated by Archbishop Gray.

In 1995, it became apparent that expensive maintenance works were required in the Church and presbytery. In particular the church and presbytery stonework had eroded and was in a dangerous condition. Age and atmospheric pollution were having their effect. With the help of grants from Scottish Heritage and the Millennium Lottery Trust and generous help from private benefactors the work of re-roofing the church and replacing sections of the heavily eroded sandstone buttresses and sections of the sandstone tracery was carried out. A generous benefactor also paid for the re-leading of all the valuable stained glass. At the same time art work in the church was restored.

The Oblates hoped that Leith would become a centre for preaching missions throughout Scotland. A large presbytery was designed and built in 1860 by Edward W. Pugin with this in mind. In 2005 the work of renovating the presbytery too was completed, dedicating the ground floor for Parish meetings and functions.

Ordinations and vocations
In 1865 Bishop Strain ordained Fr. Gibney in the church in Leith.

In 1929 Brother Frank McGourty who was born and educated in Leith made his final vows. He went to the Canadian mission in 1933 and died in Vancouver in 1983.

Another Leither Oblate was Fr. James Morrison who was ordained in 1935 and served in the home province, with an interlude of war service. He died and is buried in Inchicore, Dublin.

On 21 December 1971 Frank Murray, a native of the parish, was ordained in Leith by Cardinal Gray and is serving in the home province.

Cardinal Gordon Joseph Grey
On 20 June 1951 Gordon Joseph Grey, a native of Leith who had been baptized in Leith by Father Moughty, was appointed Archbishop of St. Andrews and Edinburgh. He made regular visits to Leith for Confirmations, parish visitations and special ceremonies. With rare exceptions he visited the Oblate community each year on 8 December. In 1976 he celebrated the silver jubilee of his Episcopal ordination in St. Mary’s. He was elevated to the College of Cardinals in 1969. He retired in 1985 and died on 19 July 1993.

The mission today
The Leith mission has given the Oblates a presence in Scotland for a century and a half. In 1980 the Oblate mission in Scotland was extended to Wester Hailes, a suburb of Edinburgh. The devolution of power to the Scottish Parliament in 1997 has brought a new prosperity to Leith. Today ‘Star of the Sea’ is a parish where parishioners are supporting their Oblate pastor in collaborative ministry, by sharing deeply in the liturgical ministries, but also in such areas as bereavement support, support for the elderly, visiting the house-bound etc. The parish is facing up to the issue of change. In a provincial assembly in November 2007 the desire to continue the Oblate presence in Leith and Wester Hailes was affirmed.

Records
In December 1910 the first edition of the Leith Catholic Parish Magazine appeared. The magazine ran until 1956. It reappeared under the name Stella Maris in 1989 and is a useful source of information about the parish.

From 1932 to 1977 the Oblate community began to keep a codex historicus that details the daily events of life from the point of view of the presbytery. It reveals the constant work going on in the community to collect money for the parish through outdoor collections and through the sodalities as well as Sunday collections.