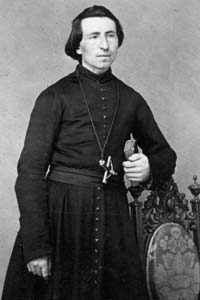 Yves Marie Lemasson was born at Erdeven in the diocese of Vannes on March 31, 1836. He made his secondary studies at the minor seminary of Sainte-Anne d’Auray where he acted as prefect of studies. Already a deacon, he entered the novitiate in Nancy on May 2, 1860. After his oblation on May 5, 1861, he left immediately for the scholasticate of Montolivet. When he was sending him, Father Jean Lagier, the master of novices, wrote: “This worthy brother who has just made his oblation is a gift to us from the Blessed Virgin. He has never ceased growing in virtue since the beginning of his novitiate […] His character which, at first blush appears a bit cold, is, in reality, very good. His talents are more than sufficient, although they cannot be termed above average. Nevertheless, he possesses all the qualities which make up the good missionary: zeal, dedication, patience, charity, a certain ease in composing and in diction, a fine voice, well modulated for singing and for hymns…”

After a year spent at Montolivet, he was ordained to the priesthood by Bishop Cruice in the cathedral at Marseilles on June 29, 1862. His superiors sent him as a missionary to Notre-Dame de l’Osier in 1862-1864, then to Rennes (1864-1866). In 1866, he received his obedience for Bordeaux. He then worked as chaplain to the Sisters of the Holy Family and especially the novices at Bordeaux in1866-1869, at Royaumont from 1869 to 1903, then at Bas-Oha near Liège, from 1903 until his death on July 22, 1916. The religious sisters very much appreciated his dedication and solemnly celebrated the fiftieth anniversary of his Oblation in 1911 and of his priesthood in 1912. According to Father Pierre Richard, o.m.i., “extraordinary answers to prayer” were attributed to him after his death. (Missions O.M.I., 1922, p. 19)