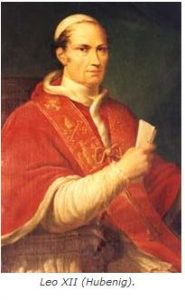 Nicòla Della Genga was born August 22, 1760 in the Genga castle near Spoleto. After his studies at Osimo and at Rome, he was ordained to the priesthood in 1783. Pius VI took him to be his secretary and appointed him archbishop in 1794 and nuncio in Cologne. He then spent several years working as a career diplomat. Pius VII created him cardinal in 1816 and named him arch priest at Saint Mary Major’s.

He was elected pope on September 28, 1823. In reaction against the too liberal policies of Consalvi, Pius VII’s secretary of state, the zelanti [the super conscientious] succeeded in having cardinal Della Genga elected. He protested that his health was very bad. “You have elected a corpse,” he told the cardinals. He held a conservative line in his policies in the Papal States, but he took a conciliatory line with the royal courts of Europe. He died on February 10, 1829.

His memory is vividly conserved in the Congregation because he is the one who approved the Rule of the Congregation. Subsequently, Bishop de Mazenod mentioned him about one hundred and fifty times in his writings and the name of this Pope appears in almost every issue of Missions O.M.I. for a century. Bishop Fortuné de Mazenod wrote fifteen letters to Leo XII, especially letters asking for dispensations, and Eugene wrote to him twice: once in 1825 with the petition asking for approbation of the Rules and in 1826 to ask him to grant the Oblates the privileges enjoyed by the Redemptorists.

Upon arriving in Rome on November 26, 1825, Father de Mazenod spent his first weeks in establishing contacts with cardinals, bishops, prelates and individuals in the Roman Curia. He learned that the Congregation for Bishops and Religious was initially granting only a decree of praise to congregations that were requesting approbation. On December 20, he was received in audience by the Pope. In the course of the half hour they spent together, he succeeded in convincing Leo XII that he should approve, not only praise the Rule. This is the desire the Pope expressed to Bishop Adinolfi, the vice- secretary of the Congregation for Bishops and Religious, on December 23. “This society pleases me,” said the Holy Father, I wish to favour it. Choose a Cardinal, one of the mildest of the Congregation… go to him on my behalf and tell him my intention is not merely that these Rules be praised but that they be approved.” (Oblate Writings I, vol. 6, no. 213, p. 222-223)

In January, Cardinal Pacca obtained from the Pope the privilege of forming a committee composed not of seven or eight cardinals, but only of three. Several times in his diary and in his letters to Father Tempier, the Founder stated that the Pope personally wanted to approve and not simply praise. (Oblate Writings I, vol. 7, no. 231, p. 66, 69-70) and that he recommended “fast tracking” this affair. (Mazenod Diary, entries of January 28 and March 2, 1826) The Pope approved the Rule and the Congregation on February 17 and signed the brief on March 21, 1826. The Founder hastened to write to Father Tempier on February 18: “Te Deum laudamus […] yesterday evening, the Sovereign Pontiff Leo XII confirmed the decision of the congregation of Cardinals and specifically approved the Institute, the Rules and the Constitutions of the Missionary Oblates of the most holy and immaculate Virgin Mary, and accompanied this solemn act of his pontifical power, with most admiring words for those who happily form this society from which the head of the Church indeed expects the greatest good. Everyone is stupefied at this. Even those called upon to contribute with their votes to the execution of the very emphatic will of the Pope, are surprised by the unanimous agreement of views and especially with the imperturbable resolution of the Holy Father, whom nothing has been able to deter from the first thought with which the Holy Spirit inspired him on the first day that I knelt at his feet and presented to him the plan of this enterprise which now we can all call divine. The Pope knew everything and weighed everything in his profound wisdom…” (Oblate Writings I, vol. 7, no. 226, p. 39).

On April 15, shortly before his departure from Rome, Father de Mazenod was received in a second audience. On April 16, he related this event to Father Tempier and, among other things, told him: “If you had seen the Pope in the audience of a good half hour that he granted me yesterday, you would have wept for joy. With what goodness he spoke to me, with what grace he smiled at the things I said, with what abandon he granted me all that I asked, with what confidence, I cannot help telling you, he spoke to me of things quite secret, which proved to me the opinion that he kindly has of me; but I knew it already by all that the Holy Father had said about me on different occasions to different persons…” (Oblate Writings I, vol. 7, no. 237, p. 87). The Founder here makes allusion to the plan the Pope had of gathering a Roman council for which purpose he would have called upon theologians from outside of Italy; he would have elevated them to the cardinalate and placed them in the curia. In France, his choice had settled on Lamennais and on Father de Mazenod. Father de Mazenod recalled this later on in his diary entry of July 16, 1845, and in a July 22, 1853 letter to Cardinal Ferretti.

Bishop de Mazenod was ever grateful to Leo XII for this approbation and, at least ten times in his correspondence from 1826 to 1860, he recalls that the credit must be attributed to the express will of Leo XII.