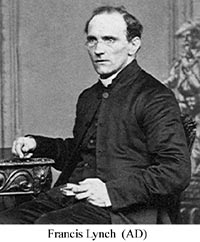 Francis Joseph Lynch was born on 9 August 1818. He began his novitiate with Father Daly, no doubt in Penzance, on 7 December 1847, and made his oblation on 8 December 1848 before Father Casimir Aubert, probably in Grace Dieu. He spent two years as a scholastic in Maryvale in 1848-1850 and one year in the major seminary in Marseilles. In a report dated July 1851 the scholasticate formator Father Jean Marchal wrote: “Brother Lynch leaves me little to say about him on account of his love for tranquillity and solitude. He hardly ever joined in with the community; he communicated with no one and the seminary seemed to bore and exhaust him. He has been here a limited time only and he leaves us hardly a trace.”

He was ordained priest by Bishop de Mazenod on 29 June 1851 and immediately returned to his province. According to some letters and the review Missions OMI he was superior of the reformatory in Glencree in the years 1862-1866. We read in 1862:

“Father Lynch and the community in Glencree continue with ever growing success the great work of reformation of the inmates. They now number 210…” In his report on the Anglo-Irish province dated 21 October 1865 Father Robert Cooke, provincial, adds: “Under the intelligent and judicious direction of Rev. Father Lynch and his zealous colleagues, St. Kevin’s Reformatory must be rated a model institution of its kind, in view of both the perfection and comfort of its internal administration and the immense good done to the young delinquents confided to its care, under the influence of an admirable religious and industrial discipline. Impossible for those who have not seen Glencree to believe that 260 young people of all shapes and sizes, formerly in rags, rascals, vagabonds, could be transformed, under the gentle, benevolent but firm direction of Rev. Father Lynch and his colleagues, into a band of young pupils at ease with themselves, bright and joyful in appearance…”

In 1868 he is a preacher and asks for a dispensation from his vows “on the ground that he cannot adapt himself to community life and thinks that the secular priesthood will be better for his health…” At the meeting of the General Council on 7 May 1868 he was allowed to ask the Congregation of Propaganda Fide for the dispensation. After leaving he was for 10 years a parish priest in the diocese of Shrewsbury, then chaplain in the establishment of a rich landowner in the archdiocese of Edinburgh, Scotland. In October 1886 he asked Father Joseph Fabre for readmission to the Congregation. In a letter to Father Charles Tatin dated 8 November 1887 we learn that the Superior General did not give his consent.

A Father ‘Linch’ is noted as one of the Oblates present in Leeds on 21 May 1853 for the blessing of the first stone of the new church of Mary Immaculate.