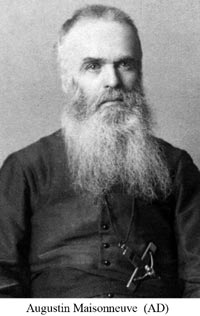 Augustin Maisonneuve was born in the village of Chapelière, parish of Désaignes, in the diocese of Viviers, France, on April 10, 1854. His parents were Romain Maisonneuve and Marie-Rose Blanchet. After studies in the minor seminary of Vernoux and the major seminary in Viviers, he entered the novitiate of Notre-Dame de l’Osier on March 13, 1847. There he took vows on March 14, 1848 and was ordained priest by Bishop de Mazenod on the following April 8.

He immediately received an obedience for Red River in Canada and he set sail in the month of May. Bishop de Mazenod informed Father Pierre Aubert that “Father Maisonneuve whom I am sending to your country, is a little saint.” He ministered in Saint-François-Xavier, which is situated in White Horse Prairie, Manitoba (1848-1850), then in Île-à-la-Crosse, Saskatchewan (1850-1853). In 1853 he became ill and discouraged and, at the same time as Father Jean Tissot, he wrote to Bishop de Mazenod complaining about Bishop Taché. We know that Father Bremond, who was stationed at Saint-Boniface, spoke against the bishop and encouraged the other Fathers to criticize him. In June 1853 the Founder wrote a letter of encouragement: “My dear Fathers and beloved children, how your letters have hurt me! How can you, who have been sent by God, who are the real apostles of these nations who have never seen the light of truth, you before whom, even though you are my children, I venerate and prostrate myself in spirit, how can you show yourselves to be so weak in the face of some obstacles or when faced with some contradiction, even to the point of leaving the battlefield free for the demon when you have been commissioned by the Church to attack his empire? Courage therefore, my children, take care not to give in to such a vulgar temptation. My dear children, I believe you when you say you have reason to complain of your superior. I even suppose that he may have been unjust towards you. But what should that mean to a truly religious soul? It is a means provided by God for self crucifixion and advancement in virtue.”

Father Maisonneuve was then recalled to Red River from 1853 to 1855. He built a house and chapel at Saint-Norbert. From 1853 to 1862 he was superior in Lac-la-Biche, Alberta. As superior he corresponded with Bishop de Mazenod and during the period 1855-1859 he received some beautiful and encouraging letters and words of congratulation for the missionaries who “truly purchase souls at the price of their blood”.

Because of acute deafness which made his ministry impossible he returned to Saint-Boniface from 1868 to 1893 and was procurator for the missions of Saint-Boniface and the apostolic vicariate of Athabaska-Mackenzie. In this role he often wrote to Father Sardou, the general treasurer.

His death was accidental. On July 28, 1893 he was struck by a train which he could not hear as it arrived.