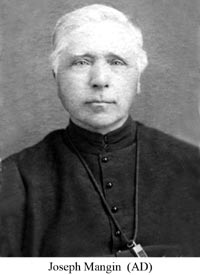 Joseph Mangin was born in Neuviller-les-Badonviller, diocese of Nancy, on May 30, 1830. His parents were Sébastien Mangin and Marie-Anne Marsal. He studied in Blamont College, in the minor seminary of Pont-à-Mousson and in the major seminary of Nancy. He was already a sub-deacon when he entered the novitiate of Notre-Dame de l’Osier on July 13, 1852 and it was there that he took vows on July 26, 1853. He had been admitted to final profession on the previous July 4. The comment of the general council meeting on that occasion says: “The notes received concerning him from both Father Richard and Father Vandenberghe who were his novice masters, could not be more favourable. He is presented as a suitable candidate from every point of view. Gifted with piety, with more than ordinary talent, a cheerful character and besides, enjoying very good health.” After a few months in the seminary of Marseilles he was ordained priest by Bishop de Mazenod on October 15, 1853 and sent to the house of Le Calvaire, Marseilles, to follow classes in the grand cours(advanced studies) under the direction of Father Ambroise Vincens.

He received an obedience for Lys Marie, England (1854) and from there he went to Galashiels, Scotland (August 1854-1859), ministering in the parish and chaplain to the family of Sir Walter Scott. He was then transferred to Dublin, Ireland, where he became chaplain to the Poor House, professor and moderator in the scholasticate in Inchicore (1859-1863). He then returned to France and taught in the scholasticate of Autun (1863-1865).

Returning to Canada (1878-1898), he was appointed moderator of scholastics at the University of Ottawa (1878-1885), first superior of the Saint-Joseph scholasticate (1885-1893) and superior of the major seminary (1893-1898), which was then in the University of Ottawa. In a short history of the Saint-Joseph scholasticate, Father Rodrigue Villeneuve wrote that, at the opening of the house in 1885: “we were only four directors. Father Mangin, superior, a warm heart in an icy covering, taught moral theology and sacred eloquence.” (Missions OMI, 50 (1912) p. 267.

Father Mangin spent the end of his life in Lowell where he was pastor of Saint-Joseph and superior of the house (1898-1904) and then went to Immaculate Conception (1904-1909). In a report on the houses of Lowell, Father Pierre Brullard wrote: “Since 1904, Father Mangin had left our house at Saint-Joseph where he had been the much loved superior since 1898. He has remained in Lowell at the house of the Immaculate Conception where he continued until his last breath to exercise his zeal and practice the religious virtues. Death found him ready to enter the presence of God; he had prepared himself through the obedient resignation of the good labourer who has placed all his trust in the goodness of God. A journey to Canada on the advice of his superiors did nothing to improve his health which had been precarious for some time, and on August 22, 1909, Father Mangin died the death of the just with all the consolations offered by religion.” (Missions OMI, 49 (1911), p.393. He is buried in the Oblate cemetery in Tewksbury, Massachusetts.