The Oblates arrived in Canada on December 2, 1841, and settled in Bytown (today Ottawa) in 1844. Their ministry was among the most abandoned and they did not hesitate to cover great distances to reach the scattered population in their poverty. That is how they came in contact with the Algonquin (Anisinabeg) Amerindians who from time immemorial had wandered over the hunting ground watered by the river Gatineau and its tributaries, especially the river Desert, that is, north of the Ottawa river.

For many years these native nomads joined the Mohawks of Oka (Lac des Deux-Montagnes), not far from Montreal) for the summer meeting period. However, because of conflict between the two tribes, the Algonquin abandoned the Oka and, from about 1820 onwards, they met on the narrow strip of land to the south of the Desert river, where it flows into the Gatineau, and they called the place Maniwaki (Mani meaning Mary, aka meaning land and the w to facilitate pronunciation; therefore Mary-land). The name was probably to be attributed to the influence of the Sulpicians of Oka who visited them from time to time in summer, before the arrival of the Oblates. Maniwaki is situated about 135 kilometres north of Ottawa. 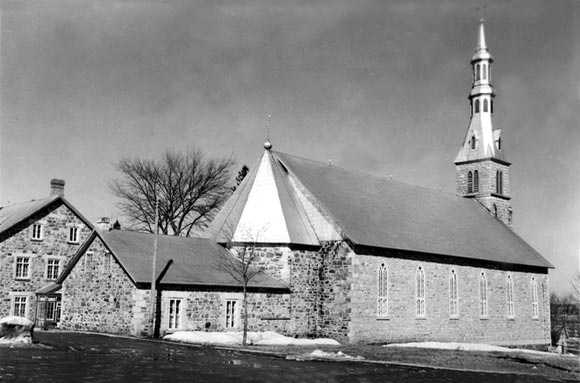 From 1845 to 1847, Father Hercule Clément, o.m.i., visited the Algonquins in the course of his travels to Témiscamingue and Abitibi. He was probably influential in the move at that time made by Chief Antoine Pakinawatik and his people who requested Bishop Guigues to intervene on their behalf with the Canadian government to obtain their own reserve; a territory of 60,000 acres at the meeting of the rivers Gatineau and Desert. For some years already the loggers had been gradually invading their traditional territory, cutting down the great forests of red and white pine. Consequently the Algonquins felt their existence was being threatened. Thanks to this reserve they could hold on to some of their ancestral land and live according to their traditional life-style.

The establishment of the reserve was approved on August 7, 1849, although it was not officially ratified until August 9, 1853 and then consisted of only 45,750 acres. On April 15, 1851, the Oblates themselves obtained 200 acres of land to establish Maniwaki and thus provide the service of their ministry to the native peoples, visit the loggers’ camps in the surrounding area, not forgetting the mission of Upper Saint-Maurice and the Têtes de Boule Amerindians (today known by their real name, Atikameks) as well as the native peoples in Témiscamingue, Abitibi and even James Bay.

Beginnings of the Oblate mission in Maniwaki
According to the Codex Historicus (p.5), Father Hercule Clément and Brother James Brady were the founders of the Maniwaki mission. They arrived on January 18, 1849 and took up residence in very poor lodgings belonging to a native Amerindian named Pananjana (sic). Father Clément left almost immediately to visit the loggers’ camps along the Gatineau and its tributaries while Brother Brady began to cut down some trees on the mountainside facing the meeting of the Gatineau and the Desert and he made a number of journeys to Ottawa to procure provisions necessary for the summer. On his return from the camps, Father Clément carried on the work of tree-cutting and the building of a little house, which was to be the residence until 1868. An extension was also added to the Pananjana residence to serve as a chapel once the house was completed.

That was the beginning of the Oblate mission in Maniwaki. However, it is generally accepted that the official date of the Oblate foundation was April 15, 1851, the day on which confirmation was received from the government that they had been given the 200 acres taken from the territory of the reservation.

The mission was at first called Our Lady of the Desert but this is what Father Hercule Clément wrote in the Baptismal register on June 8, 1851: “On June the eighth eighteen hundred and fifty-one, we the undersigned, a missionary priest, having long wished to put the mission of Maniwaki (Desert river) under the special protection of Mary, with the consent of the Bishop of Bytown, have chosen Mary, under the title of the Assumption, as patroness of the aforesaid mission and, in the name of all the faithful, we have read a formula of consecration to her service.”

That was the beginning of the parish of the Assumption of the Blessed Virgin Mary. It ministered simultaneously to the native peoples and to the whites who, little by little, came to reside in Maniwaki. Much later, in 1917, the Oblates built the little church of Our Lady of the Most Holy Rosary near the reservation (according to the Codex Historicus of Our Lady of the Most Holy Rosary, 1942), which was specially for the native peoples but the Oblates did not have a residence near this little church until after 1942 when they built the presbytery. We shall speak of this later. Today the town of Maniwaki is no longer an integral part of the reservation, which is now called Kitigan Zibi.

In spite of the fact that they had built this beautiful church and that they lived in the large presbytery alongside it, during many long years, the ministry of the Oblates of Maniwaki was not confined to the parish of the Assumption. The Codex Historicus provides us with information on their numerous activities nearly every year. Here, for instance, is what it says about the year 1856 (p. 12) and this is typical: “During winter the work places of the Gatineau are visited by Father Déléage and Father Andrieu. Father Reboul visits those of the Ottawa River. In summer Father Déléage does the mission of Hudson Bay with Father Garin. Father Andrieu does that of St-Maurice. Father Reboul remains in Desert (Maniwaki) and Father Laverlochère comes to be with him in the month of August.”

It is difficult to imagine how they could cover such distances either on snow shoes or on horseback in winter and by canoe in summer to meet the native peoples. The distance amounted to hundreds if not thousands of kilometres.

On the social level, at the beginning the Oblates built saw-mills and flour mills to meet the needs of the missions and especially to help the newcomers who were establishing themselves in Maniwaki and the surrounding area. The Codex Historicus for the year 1853 (p. 10) has the following entry: “Father Aubin, superior of the house in Bytown, on which our residence depends, came to visit. He blessed the bell for the chapel. Since the Fathers had pointed out to him the problems both they and the colonizers had to obtain flour and timber, and how useful it would be have a saw-mill and a flour mill, the superior agreed to allow them to undertake this two-fold expense and he selected Desaux (sic) as the most suitable site for building they planned. Work was begun immediately and during the winter of 1853-1854 Brothers Sweeney and Bowes prepared everything for the saw-mill.”

Further on, this same Codex Historicus adds (p. 14): “in the spring of 1860, the waters of the Gatineau, which had risen higher than usual, swept away the two mills in Desaux. The total loss was estimated to be 2,400$.

On the occasion of the visit by Father Provincial in 1866, the author (p 23), lists the properties of the Oblates and he mentions in particular, for the farm on the shores of the Saint-Joseph river in the region of Aumond, another saw-mill (two straight saws and one circular saw) as well as a flour mill.

Oblates who resided in Maniwaki
Between 1850 and 1875, 23 Oblates (18 Fathers and 5 Brothers) received their obedience for Maniwaki. They could be considered as the pioneers, even though some of them merely passed through. Among them there is one name which has been mentioned above and which stands out among the others, that of Jean-François Régis Déléage (resident from 1853 to 1879). He is acknowledged to have been the builder and colonizer of this corner of the province. The municipality of Déléage, situated quite close to Maniwaki but on the other shore of the river Gatineau, owes its name to him.

The souvenir album for the 150th anniversary of Maniwaki, published in 2001, although not pretending to be exhaustive, gives the names of 162 Oblates who have had an official obedience for Maniwaki.

The establishment of sister parishes
As the white people continued to settle in the immense territory served by the Oblates around Maniwaki, and as the villages and little towns grew, sister parishes were founded which were eventually taken over by diocesan priests. We will mention specially: Visitation in Gracefield (1868), Saint-Gabriel in Bouchette (1872), Sainte-Philomène in Montcerf-Lytton (1872), Sainte-Famille-d’Aumond (1907), Saint-Raphael in Messines (1908), Saint-Boniface in Bois-Franc (1915), Holy Rosary in Maniwaki (1917), already mentioned), Saint-Félix in Lac-Blue-Sea (1919), Saint-Jean-Marie-Vianney in Grand-Remous (1930), Sainte-Thérèse-de-Gatineau (1933), Christ-Roi in Maniwaki (1953), Saint Patrick in Maniwaki (1960).

Here we cannot speak of the ecclesial development of the more distant territories that, in the beginning were served by the Oblates of Maniwaki. Such, for instance, were Témiscamingue, Abitibi and James Bay, which, eventually, gave birth to a number of dioceses.

The mission of Our Lady of the Most Holy Rosary
As we mentioned above, it was in 1917 that the little church of Our Lady of the Most Holy Rosary was built, quite near to the Kitigan Zibi reservation, on land that a certain Charles Logue donated as a gift. Although it was intended to be for the native peoples, the latter could still continue to frequent the Church of the Assumption of the Blessed Virgin Mary, which they had always considered to be theirs (Codex Historicus of the mission of Our Lady of the Most Holy Rosary, Vol.I, 1, p. 5). It was not until 1942 that a presbytery was added to the church. Among the most renowned missionaries of this mission, mention must be made of François-Xavier Fafard, o.m.i., (1915-1938), and Joseph Étienne Guinard, o.m.i., (1890-1906, 1910-1915, 1919-1964). The parish was officially handed over to the diocese of Mont-Laurier in 2006, even though it continues to be served by an Oblate. It has the civil status of a religious corporation directed by a council of administration of four native laypersons.

Conclusion
Paradoxically, since the year 2000, an Oblate missionary team has once again taken responsibility for the parishes of the territory called Upper Gatineau, starting from Messines and passing through Maniwaki, right up to Grand Remous. How long that will last we do not know. Oblate personnel is aging and has become scarce. Sooner rather than later, it is foreseen that the Oblates will leave this area for good, after more that 150 years of constant hard work.