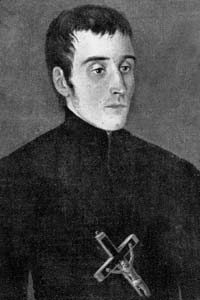 Jacques Joseph Marcou was born at Aix June 16, 1799. He was one of the seven youths, charter members of the Youth Association, founded by Abbé de Mazenod on April 25, 1813. Because of the burning zeal which inspired him from the time of his First Holy Communion, he was appointed promoter of the movement, a position he held until 1818. He gave the steadfast example of a scrupulous fidelity to the rule.

He studied at the minor seminary of Marseilles where he was an active member of the little renewal group which, as of 1812, Eugene de Mazenod had organized during his annual retreat in this institution. In 1821, Jacques made the decision to enter the novitiate of the Missionaries of Provence. He convinced Jacques Jeancard, his confrere, to follow him in the way of perfection. He took the habit at Notre-Dame du Laus, December 21, 1821 and made his oblation on May 30, 1822. Before his vows, he wrote a letter to his friend Joseph Hippolyte Guibert at the major seminary of Aix and convinced him as well to become a missionary. In the autumn of 1822, the novices and the Oblates left Laus to move to Aix where Jean Alexandre Dupuy was treasurer. On December 6, 1822, he wrote to Father de Mazenod: “Father Tempier was meticulous enough to send our Oblates to us completely stripped ) of their money, that is. Father Marcou has no shirts, shoes or socks. I am in a state of total financial ruin.”

Jacques was ordained to the priesthood by Bishop Fortuné de Mazenod on September 20, 1823. He participated in two parish missions in the first months of 1824. He spent the summer at Aix where he studied under the direction of Father Courtès. In December, he preached a mission at Allauch with Father Suzanne. The Founder urged them to “teach the people what Christian living is.” At the beginning of 1825, he was at Notre-Dame du Laus. In the month of August, he took a few weeks of rest with a family in Veynes and, in September, was sent to the new Oblate house at Nîmes with Fathers Mie and Guibert. They preached a parish mission in November and December. Later, Bishop de Mazenod would write: “Their workload was really excessive and Father Marcou’s health suffered from it. Inattention on the part of the infirmarians at the seminary in Nîmes where he had gone for treatment heaped calamity on misfortune, sealing his fate. They poisoned him by giving him a milk potion to drink. This accident so aggravated his ill health as to make the man incurable. Father Marcou still had the strength to return to Marseilles where, upon my return from Rome, I found him a totally desperate case. His chest was afflicted to the point where any thought of a cure was hopeless. And yet, he deluded himself that he was still able to work for the salvation of souls…”

Father Courtès wrote a brief obituary for Father Marcou. After giving a few details about the life and the illness of Father Marcou, he concluded with these words: “He was a man of ordinary talents, but full of humility and dedication. He was capable of rendering the most valuable assistance. In a spirit of regularity and obedience that was wholly edifying, he carried out the duties we were then obliged to fulfill at the general hospital at Aix. He took part in several parish missions… Father Marcou’s education was inadequate, but he had the eloquence of the heart. His desire to be useful to the Church and to us drove him to exhaust himself during a retreat that he was giving in Nîmes and the spitting of blood that began at that time, aggravated by a stomach ailment, brought on by a kind of accidental poisoning by people who served him a milk potion in a bowl containing verdigris [a green or greenish blue poisonous pigment resulting from the action of acetic acid on copper] led him to the grave…”

In all his letters written from Rome from February to June 1826, the Founder mentioned the sick person and was concerned about him. Father Marcou had the strength to take part in the July 10 to 13, 1826 Chapter just as he had participated in the Chapter of 1824. They then transferred him to the country at Saint-Just near Marseilles. His state of health was worsening. He received Extreme Unction on August 15 and died August 20. The Superior General immediately communicated this news to Father Honorat at Notre-Dame du Laus and added: “What a holy death! He kept perfect consciousness until the last sigh which had been preceded immediately by these touching words: Beautiful Heaven! expressed in the sweetest accents and a celestial smile. I have no doubt that this holy religious, this dear and beloved son, perceived in that moment the place that he was going to occupy at the foot of the throne of our good Mother who has assisted him in a tangible manner in this last passing; also, with what tenderness of devotion did he bring to his mouth and over his heart the image that I presented to him five minutes before he expired. He has been miraculously delivered from all anguish and fear. It is evident that heaven was assured to him. He was sure of arriving there by the protection of our Mother and the sovereign mediation of our Divine Master.” (Letters to the Oblates of France, 1826-1830, Oblate Writings, vol. 7, no. 251, p. 115-116)

Through his Diary and his letters, we see that, almost every year after this, Bishop de Mazenod celebrated the memorial of his death. The remains of Father Marcou are laid to rest in the Oblate vault in the cemetery in Aix.