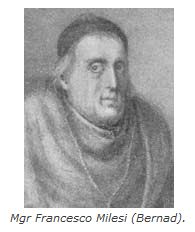 After Don Bartolo Zinelli, it was undoubtedly Bishop Francesco Milesi who exercised the greatest influence on the moral and spiritual formation of Eugene de Mazenod in Venice.

Francesco Milesi was born in Venice on March 25, 1744. Ordained to the priesthood, he was assigned to Saint Sylvester parish of which he became the parish priest in 1794. In his Memoirs, Bishop de Mazenod wrote: “He was a man of acknowledged merit, a good shepherd in every sense of the term. In easy circumstances financially, he made the best use of his income, and being endowed with a fine talent for teaching, he distributed every Sunday the bread of the word to his people, who were joined by a large number of people from neighbouring parishes who always filled his church. He was assiduous in the confessional, and refused his ministry to no one; he was, in a word, the very model of a good shepherd…” (Oblate Writings I, vol. 16, no. 8, p. 40)

It was no surprise, then, that in 1807 he was named bishop of Vigevano. He threw himself completely into building up the diocese, a diocese that sorely needed it. As bishop of Vigevano, he was summoned by Napoleon I to attend the national council which took place at Notre-Dame de Paris on June 17, 1811. It was there he had the occasion to meet Abbé de Mazenod, his former parishioner in Venice. In 1815, he was transferred to the patriarchal seat of Venice and named cardinal. His charitable and holy life came to an end on September 18, 1819.

The de Mazenods’ arrived in Venice on May 18, 1794. Initially, they found lodging near the Piazza San Marco. Then, after a month, they established themselves comfortably enough “alla Locanda della Regina d’Inghilterra” situated on the Grand Canal opposite the Grimani palace. They stayed there until the month of November 1797, the date of their departure for Naples.

Each day, Eugene used to serve Mass for his great-uncle Charles August Andrew de Mazenod at the parish church of Saint Sylvester. The parish priest, commonly called the “pievan,” was Don Francesco Milesi. This worthy priest took a keen interest in the lad who was exiled from his homeland and was at loose ends. He took a great liking to him and decided to help him continue his education. He reached an understanding with Don Bartolo Zinelli, a priest in his parish who had no pastoral assignment, to carry out this project. In his Memoirs, Bishop de Mazenod wrote: “Father Milesi formed a great affection for me and having discerned some good in me in the frequent dealings he had with me, he subsequently without my knowing it got the idea of helping me. The position of my family did not make it possible for me to have me the teachers necessary for me to continue my studies; Father Milesi decided to make good the deficiency and God blessed his charitable intention. He had in his parish, as I have already said, the respectable Zinelli family, one of whose members, a holy priest, went every day to the church to celebrate the holy mysteries. The pievan, Father Milesi, got together with him, and it was not difficult to get him to come to the aid of my youth…” (Oblate Writings I, vol. 16, no. 8, p. 40)

November 22, 1795, Charles August Andrew de Mazenod, Eugene’s great-uncle, died. Eugene’s father assigned him the task of arranging the funeral with the parish priest, but, it was to be as simple as possible because of lack of funds. Not only did the parish priest Father Milesi not want to accept any honorarium, but he conducted a splendid funeral service and counted himself fortunate to share with the de Mazenod family their legitimate sorrow and to render homage to such a holy person. Bishop de Mazenod concluded: “This is the man God placed on my path in this foreign land to be the first instrument of his mercies toward me!” (Oblate Writings I, vol. 16, no. 9, p. 46)

In Venice, Eugene had as his ordinary confessor Father Joseph-Marie Zauli, a former Jesuit priest of 82 years. But from time to time, he would also go to confession to Father Milesi, the parish priest. Abbé de Mazenod met his former parish priest and protector at the inaugural session of the national council in Notre-Dame cathedral in Paris on June 17, 1811. Later on in his Memoirs, Bishop de Mazenod wrote: “We met again in Paris on June 17, 1811 at the time of the National Council to which he was called as Bishop of Vigevano. … It was a touching sight. I was acting as master of ceremonies under Fathers de Quélen and de Sambucy. I approached Bishop Milesi on his arrival, since I had not found him at home the previous evening, and I mentioned my name. The good bishop was beside himself with joy at finding again his adopted child now twenty-eight years old, a deacon, and, unmindful of where he was and the occasion, he fell on my neck and drew me tenderly against his breast. I was as moved as he, and everyone asked what was happening…” (Oblate Writings I, vol. 16, no. 9, p. 46)

If Don Bartolo Zinelli was the principle agent in forming Eugene in Venice, Bishop Milesi was the instigator or, borrowing the expression of Bishop de Mazenod, “the first instrument” of the graces of Venice. As parish priest and extraordinary confessor of the young Eugene, he effectively furthered the efforts of the main educator, Don Bartolo.