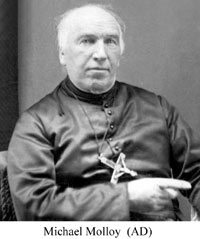 Michael Molloy was born in Cork, Ireland on November 1, 1804. His parents were Michael Molloy and Emily McLean. He was already advanced in age when he met Father Casimir Aubert and began his novitiate in Penzance on October 2, 1844. He continued at Notre-Dame de l’Osier and took vows there on April 13, 1845, having obtained a dispensation from six months of novitiate because of his age.

In 1844, Fathers Adrien Telmon and Damase Dandurand had received their obedience for Bytown in Canada and they asked the Founder to send them an English-speaking Oblate to minister to the Irish who formed the majority of Catholics in the town. Within a few months, Michael Molloy received all the Orders and Bishop de Mazenod ordained him to the priesthood on July 6, 1845. He had already received an obedience for Canada on June 12, 1845 and, in February, Bishop de Mazenod had written to Bishop Bourget: “Providence, which sees all our needs, has provided just the subject who has been requested so insistently: he is an excellent Irishman whom I shall ordain during his novitiate. He has finished his theological studies. He is a man made for the job. He has plenty of good sense and virtue and, moreover, he feels called to this mission. He will certainly give satisfaction.”

Father Molloy certainly did not let Bishop de Mazenod down. He remained at the service of the Irish in Ottawa cathedral from mid-September 1845, the date of his arrival, until 1890. He always worked quietly and unnoticed, but zealously. His name appears from time to time from his arrival in America. Once he hit his head on a bridge while travelling on the canal from Troy to Albany. He is also mentioned during the typhoid epidemic of 1847 when he became seriously ill from the fever. Frequently he accompanied Bishop Guigues in his pastoral visits to English-speaking parishes. He became the apostle of temperance and founded an institute of Refuge for wayward girls, a work which was entrusted to the Grey Nuns and later to the Good Shepherd Sisters.

He became ill in 1890 and was no longer able to do ministry or even celebrate Mass. He was sent to live with the Oblates in Hull but there was a constant stream of the faithful who came to see him. From there he was sent to Quebec where he arrived in August 1890. His health improved somewhat until the spring of 1891. He read and prayed quite a lot. At the beginning of April his health deteriorated. He received the Sacraments of the sick on April 11 and he died on the 17th. The superior, Father Ferdinand Grenier wrote to Father Fabre: “He was in his 87thyear. The memory he leaves with us is that of a loveable old man with angelic patience, an ardent missionary whose zeal overcame all trials, an excellent religious”. Although first buried underneath the church of Saint-Sauveur, his body was later moved to the Oblate cemetery of Jésus-Ouvrier in Quebec.