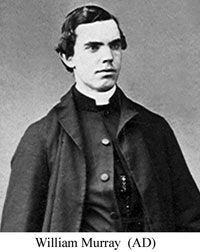 William Patrick Murray was born in Dublin, Ireland on 16 June 1835. He began his novitiate for the first time in Sicklinghall on 23 September 1857. For some reason this was discontinued. He restarted it on 28 September 1859 in Nancy. He made his oblation in Montolivet on 17 February 1861 before Archbishop H. Guibert, archbishop of Tours. After a year’s theology in Montolivet he was sent to Sicklinghall. In his reports Father A. Mouchette, scholasticate formator in Montolivet, wrote in March-April 1861: “Murray, generally regular […]; he did not seem free in his directions; regular, applies himself to his duties of piety and study…” “rough edges…He could become a good missionary; he has good sense, excellent talents and is full of good will.” Father Arnoux, superior of the scholasticate in Sicklinghall, wrote in August-September 1862: “He seems regular enough […]; less obstinate and consequently less rude in some of his manners and words.” The Sicklinghall Codex records his ordination as a deacon in Birkenhead on 4 October 1863. The Bishop of Beverly ordained him to the priesthood on 1 November 1863.

On the basis of his correspondence, he was in Leeds in 1863-1865. On 12 September 1865 he gave the retreat in Sicklinghall to the lay brothers and juniors, returning to Leeds on 20 September 1865 (Sicklinghall Codex). Personnel records show him to be in Liverpool in 1867, in Sicklinghall at the end of 1871, in Leeds in 1873, in Inchicore 1874-1875, in the Stillorgan novitiate in January 1876, then in Glencree in March 1876. In the General Council register the secretary wrote on 13 May 1872: “Father Pinet complains about the bad attitude of Father Murray and of the scandal he is giving. The [provincial] council is of the opinion that, since he is considered to be incorrigible, there are grounds to expel him and a letter should be written to the Superior General to regularize such expulsion.” The Secretary General writes again on 9 February 1876: “Proposal for his expulsion; ground: incorrigible drink habit.” Father Murray challenged this decision. On the following 18 February the council then decides simply “to severely admonish him and put him on notice to completely change his behaviour” On his file in the General Archives is the re from the Holy See dated 12 March 1876 giving the superior general the faculty to dispense him from his vows.