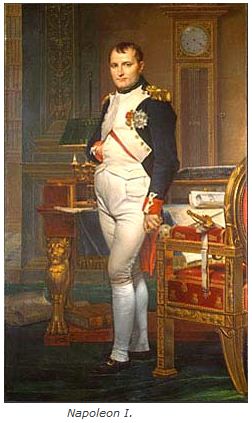 Napoleon Bonaparte was born in Ajaccio on August 15, 1769, shortly after the cession of Corsica to France in 1768. He studied at the college at Autun, then at the military schools at Brienne and Paris. He was sympathetically inclined to the Revolution when it appeared on the scene, since he thought that it could be of assistance to Corsica’s aspirations for independence. He lived in Corsica from 1789 to 1793. Back on the continent in 1793, in the army, he rose rapidly in the ranks. In 1796, he became commander of the army in Italy. He subsequently commanded the army fighting the English, then fighting the Egyptians in 1798. A gifted strategist, he was victorious everywhere.

Upon returning to Paris in 1799, he became involved in politics and was appointed First Consul and promised peace to the French people after ten years of revolution and war. He also showed that he was as gifted as an administrator as he was as a general. He reorganized the country’s finances (Bank of France, tax control), justice (civil code) and public worship as well.

The Concordat
Napoleon became aware that he needed the support of the Church. He drew up a Concordat with the Holy See which was signed on July 15, 1801 and promulgated April 18, 1802. In virtue of this concordat, the clergy gave up their right to the property they owned, but the state committed itself to see to the sustenance of the bishops and the priests as employees of the state. The government appointed the bishops, but it was the Pope who granted them canonical installation. Priests who had emigrated were allowed to return and the churches were reopened.

In Eugene’s writings of this period, he never mentions Napoleon by name, but in 1802, he stated his frank opposition to the Concordat and, on this occasion, stated that the Pope “si è sporcificato”, that is, he dishonoured himself, stooping to gestures of baseness. (LEFLON, I, Eugene de Mazenod, trans. Francis D. Flanagan, o.m.i., p. 233)

Upon his return to France in 1802, Eugene had a more accurate view of the situation and the advantages provided by the Concordat. In the course of his trip to Paris in 1805 with a view of obtaining a passport for Sicily, he wrote his father on August 14: “Tomorrow … is the day of the Assumption, a big feast for many reasons […] There will be horse races; then illuminations and fireworks, for as well as the feast that the whole Church solemnly celebrates, it is also Napoleon’s birthday. Thanks will be given to God too for the success of the concordat, and with good reason; any Catholic with an iota of zeal for the good of religion should join his thanksgiving to those of the Church in France. Religion had been given up for dead in this kingdom; and if the peace accorded to the Church had not enabled its ministers to protect the young, I mean the nascent generation, from the contagion which had affected all age-groups, but especially those we call the children of the revolution, all those of 18, 20 years of age would be ignorant of God’s very existence.” (Oblate Writings I, vol. 14, no. 10, p. 18-19)

The Black Cardinals and the National Council of 1811
In May of 1804, the Senate proclaimed Napoleon the Emperor of the French people. This was confirmed by a plebiscite on December 2, 1804. Napoleon was crowned emperor at Notre-Dame de Paris in the presence of Pope Pius VII. The relations between Rome and Paris were good for a few years. But, having defeated several coalitions, Napoleon wanted to impose the Concordat on all countries where he held sway, especially in Italy, Austria, Belgium and Holland. The Pope opposed this, refusing at the time to grant canonical recognition to the new bishops and by so doing practically rendered the Concordat inoperative. The French troops then seized Rome and the Pontifical States were annexed to the Empire by a decree of May 17, 1809. Pius VII, without mentioning Napoleon by name, excommunicated all those who took part in this action. The Pope was subsequently brought to Savona, Rivière de Gênes, where he stayed for four years and the Italian cardinals were dispersed as far away as Paris.

Eugene was in the seminary of Saint Sulpice at the time. Since he enjoyed the confidence of Mr. Emery, the superior, he became his liaison person with the Italian cardinals in Paris. He was also a member of Mr. Emery’s orium and, among other things, made a copy of the decree of excommunication which Jean-Marie de Lamennais then distributed in Brittany.

In June 1810, Napoleon exiled to the provinces, stripped them of their purple and confiscated the goods of at least thirteen cardinals who refused to attend his marriage to Marie-Louise, archduchess of Austria. Eugene worked in conjunction with several seminarians to replenish the coffers of these confessors of the faith. In a June 19, 1810 letter to this mother, he wrote: “The Emperor, after imprisoning the Pope, exiling the Cardinals, dispersing them in pairs in different towns of the Empire, stripping them of their insignia as Cardinals and confiscating all their property, has turned his attention to the Congregation of St. Sulpice which he drove out of the seminary…” (Oblate Writings I, vol. 14, no. 70, p. 161)

The Pope steadfastly refused canonical recognition of the bishops appointed by Napoleon. Many sees remained vacant. In 1811, the Emperor summoned the bishops of France and Italy to an imperial council with a view to legislating that canonical recognition could be granted by the metropolitan or the dean of the bishops of a region. The council held only one plenary session, the session of June 17, at which Eugene was present as one of the masters of ceremonies. It was there in Notre-Dame cathedral that he met Bishop Milesi whom he had known formerly in Venice and who had become the bishop of Vigevano. The bishops resisted the views of the Emperor and he dissolved the council on July 10.

In 1813, Napoleon had the Pope brought to Fontainebleau to try to reach some agreement with him. But events were moving along swiftly. France, reduced to poverty because of the wars, began to be less and less tolerant of the Emperor. In 1814, allied troops invaded France. Napoleon immediately sent the Pope and the cardinals home. Pius VII passed through Aix on February 7, 1814 and Abbé de Mazenod went to meet him and clung for some time to the carriage door with his foot lodged on the footrest. (LEFLON, I trans. Francis D. Flanagan, o.m.i., p. 419) Napoleon abdicated on April 6, 1814. He returned in the spring of 1815, but was constrained to abdicate once again on June 22. He died in Saint Helena on May 5, 1821.

During his lifetime, Bishop de Mazenod mentions Napoleon again a few times. On June 17, 1814, for example, he wrote to this father in Sicily that he is living with Brother Maur, whom, he says: “I had collected him at La Trappe when it was destroyed by the abominable tyrant, enemy of everything that is good.” In Rome in February-April, 1826, he read the Mémoires of Cardinal Pacca on his time spent in exile in France and on his relations with Napoleon. When Pope Pius IX was compelled to leave Rome to take refuge in Gaeta in 1848, in a November 29 pastoral letter, Bishop de Mazenod prescribed prayers for the Pope and made allusion to “Pius VII, the six-years captive of an arrogant conqueror.”

During the episcopate of Bishop de Mazenod, upon the request of the civil authorities, he celebrated, it seems, each year a funeral service in the cathedral on May 5 on the occasion of the anniversary of the death of Napoleon and, on August 15, the Te Deum was sung in parish churches in honour of the Blessed Virgin and the re-establishing of public worship in France in 1802 (Mazenod to the mayor, April 30, 1853 and to the parish priests on August 4, 1857).