Shortly after arriving in Nîmes in 1821, Bishop C. F. M. Petit-Benoît de Chaffoy offered the shrine of Notre-Dame de Grâce (Our Lady of Grace) near Rochefort, west of Avignon, to the care of the Missionaries of Provence. Fathers Eugene de Mazenod and Henry Tempier visited the site in the spring of 1822. They concluded that the shrine was too neglected and the number of their missionaries too small to open a house there at that time. 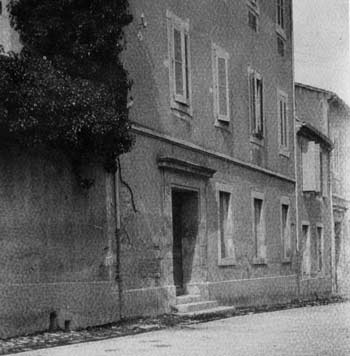 In 1825, Father de Mazenod received a new request: to open a house at Alès, a city located some kilometres north of Nîmes, at the foothills of the Cévennes mountains. He went to see the place with Father Marius Suzanne in the beginning of April. The parish priest there was prepared to lease a small house to the missionaries and the latter were to assist the parish priests and look after parishes bereft of a resident pastor. The Founder turned down this offer. Instead, he received on a temporary basis from Bishop de Chaffoy a house near the major seminary of Nîmes. The Fathers were to give missions and to be the “aides de camp” of the bishop. (Mazenod to Tempier, April 7, 1825)

Upon his return to Marseilles, Father de Mazenod established the new community. Father Pierre Nolasque Mie, the superior, Father Jean-Baptiste Honorat and Hippolyte Guibert, now a deacon, left for Nîmes on May 16. They remained in that house only for a few months. They shared the seminary refectory and chapel in common with the seminary professors and students, and also took their recreation with them. This close and daily association was intended to bring in vocations, for these three Oblates were reputed to be skilled recruiters. Bishop de Chaffoy, however, was not going to be caught by this manoeuvre: in the decree erecting the house, he specified that he would allow “diocesan clergy to be associated to the work of the missions” only “in three years’ time” (Decree of 25 April 1825). Before this time came, the Oblate community had moved into a new house that had been purchased in the spring of 1827 and was located in an area that was completely Protestant.

The personnel of this house rarely exceeded three Fathers and one Brother. Father Mie, superior from May 1825 to April 1827, worked especially with Fathers Jacques Marcou and François-Noël Moreau. Father Honorat, superior from April 1827 to September 1830, had Fathers François Hermitte and Joseph Martin with him, and Guibert in 1828. Their ministry consisted of parish missions; of prison work, especially after 1828; and, in 1829-1830, of serving a public chapel located near their house.

They began their work during the summer of 1825 by giving retreats for first communion, to a congregation of men, and to prisoners. During the 1825-1826 Jubilee, they gave three missions which were quite successful: at Saint-André-de-Majencoules, at Notre-Dame de la Rouvière and at Saint-Martial. Fathers Suzanne, Alexandre Dupuy, Jacques Jeancard and, later on, Dominique Albini, assisted them in these missions. As early as December 13, 1825, Bishop de Chaffoy could write to Father Tempier: “This whole area is changed and… the population now reflects the faithful of the first centuries.” The Founder, for his part, wrote to Mgr. Adinolfi, Under-Secretary of the Congregation of Bishops and Regulars, that the Oblates “were now working in the Cévennes where it is quite probable that missions had not been given since the time of Saint Francis Regis. The Protestants of this area, too, were beginning to return to the bosom of the Church…”

As in the other Oblate houses, the Fathers were out giving missions from the month of November until Easter. In several of his letters to Fathers Mie and Honorat, the Founder begs them not to take on so much work, to take a rest between two missions. They were, in fact, imprudent in this matter: it was at Nîmes that Fathers Marcou (d. 1826) and Suzanne (d. 1829) became ill, that Father Mie himself suffered an apoplectic stroke during the course of a mission (JM, August 20, 1838 and March 1, 1839).

In the spring of 1828, Bishop de Chaffoy gave them the pastoral care of prisons. The latter counted more than 1000 inmates. The Founder accepted this offer and wrote to the Bishop on March 10: “Obedience has worked as many miracles as faith has.” Fathers Moreau and Guibert began their ministry in the prisons by preaching a mission in the standard form. In this regard, Father de Mazenod wrote on December 11, 1830: “At Nîmes, besides giving services in the church and doing difficult missions in the Cévennes which are riddled with Protestants, the Bishop has decided to put them in charge of the penal institution which houses some 1400 condemned prisoners. These are a degraded lot, whose notion of morality and religion dates only from the moment that they were entrusted to the charity of our Congregation’s men. The latter have worked veritable miracles of conversion in this den of brigands.” (Mazenod to Father Grassi, S.J.)

The 1830 July Revolution put an end to this apostolate. At Nîmes, as Father Rey writes, “religious passions linked up with political passion. The Protestants threatened the clergy. The Bishop and the cathedral canons had left the city. Our missionaries, pelted with insults and pursued with cries for their death, withdrew to stay with priests in the countryside.” (Rey I, 489) Father Honorat returned in September, but he again had to flee, this time disguised as a barber’s helper. It was clear that the house at Nîmes had to be given up.

For several years the Founder had hopes that the Oblates could return to Nîmes. He waited until the death of the aged Bishop de Chaffoy (d. 1837). During this Bishop’s last years, it was his Vicar General, Fr. Laresche, who was in fact governing the diocese. Fr. Laresche did not want the Oblates to return. He had founded a group of missionaries of his own and even tried, in the name of the diocese, to take back the Oblate house which had been rented out and to give it to his own missionaries (JM, 26 January and 16 February 1837).

Bishop de Chaffoy’s successor, Bishop J. F. M. Cart took solemn possession of Nîmes on July 2, 1838. He made no move to recall the Oblates. The Founder then understood that it was futile to keep on thinking of a foundation in this diocese.

Part of the Oblate property at Nîmes had been paid for by moneys collected from the diocesan faithful. Father de Mazenod, however, had in 1827 obtained the concession (cf. his letter to Bishop de Chaffoy in June-July) that the Oblates were its true owners, even if they had to leave the house “under the duress of force majeure or due to human decisions taken against the blameless Missionaries.” (JM, February 16, 1837) In February-March 1839, he sold the house. (JM, February 28 and March 1, 1839)

Nîmes was the first Oblate house outside of Provence. In 1825 it occasioned the change of name from Congregation of the Missionaries of Provence to Oblates of Saint Charles.