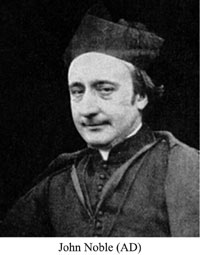 John Noble was born in Dublin on 6 June 1823 into a pious middle class family. In 1839 aged 16 he entered the college of St. Vincent de Paul in Castleknock, near Dublin, directed by the Vincentians, and remained there until 1841. The college’s president, Father Duff, praised the young man’s virtue and zeal for the work of the Society for the Propagation of the Faith.

During the summer of 1841 John met Father William Joseph Daly, sent to England and Ireland by the Founder to examine the possibility of an Oblate foundation. John left for France with two fellow countrymen (Francis McDonagh and T. Meehan) and on 21 November 1841 began his novitiate in Notre-Dame de l’Osier. Of the three he alone persevered. He himself was close to dismissal as the whole group fell under a cloud (Founder’s Diary, Oblate Writings I, Vol.1, p. 88-89.). In September 1842 he joined the scholastics in the Marseilles seminary where he made his oblation on 17 February 1843 before the Founder. The scholastics spent their summers in Notre-Dame de Lumières. In 1844 Father Pascal Ricard, superior, judged them all “weak in virtue”, with the exception of Brothers Édouard Chevalier and Joseph Arnoux. He was also “fairly satisfied with the Irish Brothers J. Naughten and J. Noble.” In 1845 Brother Noble had an attack of scruples, to the extent that he no longer did anything in the seminary. His case was submitted to the General Council on 9 May. The members of the Council proposed to dispense him from his vows. It was feared that the illness was hereditary, as “his mother had been struck with a kind of mental alienation at the end of her life.” However the advice of Fathers Casimir Aubert and Charles Bellon was followed to send him for a rest to Father Vincens in Notre-Dame de l’Osier “for a few months further trial.”

In England (1846-1856)
Brother Noble recovered sufficiently to be sent to England with Father R. Cooke during the summer of 1846 (The story of this journey is told in OMR 1892 p.181-2. On 13 July 1846 they took tea with Mrs. Ambrose Lisle Phillipps de Lisle in Boulogne: OMR 1893 p. 39). He stayed first in Grace Dieu in Leicestershire and took part in some ‘open-air missions’ with Father Cooke who describes such a mission with Brother Noble in the central role in his ‘Sketches’. He had been ordained subdeacon by the end of 1846, deacon in April 1847 and on 18 September 1847 he was ordained priest in the chapel of St. Mary’s College, Oscott by Bishop Wiseman. In pursuit of the Founder’s recommendation to establish a foundation in Ashby, Brother Noble had acquired a site there and rented a theatre to serve as a chapel. When this project was abandoned, Father Noble, who had now left the area, was threatened with imprisonment, as he could not pay. At Father Cooke’s request, Mr. Phillipps came to the rescue and paid the owner £100 (cf. Vincent Denny, Reaching Out, p. 35. OMR, 1893 p. 41).

In the years 1847-1848 six foundations were made in England and four were abandoned almost immediately. This explains the variety of obediences Father Noble received. In 1848 he is in Everingham in Yorkshire where he worked effectively to restore the Catholic community in the village of Pocklington, in 1849 in Maryvale (Old Oscott) to take charge of the mission and serve in the chapel, in Manchester and in Aldenham. At the end of 1849 he takes part with Fathers Aubert and Egan in the mission given in Liverpool. Following this mission the Bishop confided to the Oblates the district and chapel of Holy Cross. Father Noble lives and works in Liverpool from 1850 to 1855. In February 1851 Father Casimir Aubert, then superior of the community, wrote to Father Arnoux: “Our fathers in Liverpool are in quite good health with the exception of poor Father Noble who will end up killing himself with overwork.” In a letter dated 20 July 1851 the Founder speaks of “the mission of Fathers Cooke and Noble in London.” The tradition in Holy Cross parish, now defunct, was that Father Noble was the first superior. He fulfilled in fact the role of parish priest, for it was the Founder’s decision and that of Father Aubert that Father Aubert would be succeeded by Father Pierre Amisse who was brought from Canada for that purpose in 1853. Father Amisse was recalled to France early in 1855 for health reasons. As parish priest Father Noble built a large school and was involved in many struggles on behalf of his flock (Fr. Noble’s activities in Holy Cross are described in detail in The Story of Holy Crossby Daniel Murray, Centenary publication, 1949). Sick in 1854, he was summoned to Marseilles by the Founder; he stayed there convalescing from September 1854 to 18 February 1855. The year 1855 was spent in pursuing a number of unsuccessful initiatives: a house for missionaries in Liverpool, a college in the Isle of Man, a foundation in Pant Asaph. On 1 September 1855 he embarked at Liverpool with Father Aubert in an unsuccessful search for a house in Dublin in view of making a foundation there. They had in mind a school on Arran Quay. They had two friendly but unproductive visits with Archbishop Cullen. They left on the evening of 4 September 1855. According to Father Fabre, Father Aubert especially confided to Father Noble the task of pursuing this project. Coming up to Christmas 1855 Father Noble again visited Dublin, this time with Father Cooke. After two audiences with Archbishop Cullen Father Cooke had to leave for England. Father Noble continued the negotiations, again without success and left for Leeds, his new assignment, early in February 1856. From Leeds he took part in a major mission in Bradford with Father Cooke, Arnoux and Fox. After helping out in Liverpool over Easter he left for Dublin to take part in a mission in the Augustinian church in May. The success of this mission moved the Archbishop to consent to a foundation being made in Dublin. On 12 July 1856 in the Provincial Chapter held in Lys Marie Father Noble was elected delegate to the General Chapter held in August in Montolivet, Marseilles.

In Scotland (1856-1867)
On his return from the chapter Father Noble was named superior of the community in Galashiels in Scotland. He was present at the solemn opening of the church of Mount St. Mary’s Leeds in 1857 and preached on the second day of the octave. He continued to preach missions, notably the Lent mission in Edinburgh cathedral in 1858 and the Thurles mission in July. In 1859 he obtained from Bishop Gillis, vicar apostolic in Edinburgh, and from the Founder, the transfer of the residence of Galashiels to Leith where he built a residence for the Oblates and parish schools and planned to build a convent for the Sisters of the Immaculate Conception who established a school for girls in the parish. He preached with success in the towns and countryside of Scotland (March 1860 Dundee; 1861 pastoral retreat for clergy of diocese of Glasgow; 1863 mission in Perth and Johnstone), at the same time occasionally accompanying Father Cooke in various parish missions in Ireland (1862 Cork mission) and England.

Father Noble was the third ordinary provincial councillor from 1851 to 1856, then first extraordinary councillor, during the provincialate of Father Robert Cooke (1851-1867). As such he participated in all the decisions good and bad made by the provincial council. On the 12 January 1859 Father Joseph Arnoux in Dublin denounced him to Bishop de Mazenod as one of those responsible for the loss and closure of the houses of Penzance, Maryvale, Galashiels, etc. He accused him of leading Father Casimir Aubert by the nose, of acting as if he were provincial, of leaving Father Cooke in ignorance of his decisions, and even of deceiving the General Administration. He added: “When will this underhand system come to an end which has so often thrown our province into turmoil and confusion and undermined fraternal charity?”

Accidental death
From 30 March to 1 April 1867 there was perpetual adoration in the Oblate church in Leith. Following the last exercise of the evening, Father Noble, tired out, chatted with Brother John Atkinson and then, a victim of insomnia, went out for a night time walk on the docks, a practice he had followed also in Liverpool. He met a Catholic policeman with whom he had a long conversation. There was a high wind. It seems he failed to see a chain stretched out on the quay. He stumbled against it, fell into the water and was drowned. His body was found in the morning of 2 April, with injuries to his arm and right foot. Suspicions of foul play have been discounted.

He was mourned by all classes of society. The funeral was celebrated on 5 April by Bishop Strain, vicar apostolic of Edinburgh. Father Noble was only 43. “He was”, said Bishop Strain in his sermon, “an outstanding figure in the congregation to which he belonged and the pride of my diocese”.

In his obituary notice Father Fabre declares: “The British Province has been deprived of one of its most outstanding members; Father Noble had contributed greatly to the extension of that flourishing portion of the Family.” After Father Noble’s death, Father Arnoux wrote a long letter to Father Fabre, which Father Fabre cites in his obituary. He very highly praises Father Noble’s gifts as a preacher and his fidelity to his prayers even during the hardest missions. Father Noble “was very well thought of by the clergy and Catholic aristocracy of Scotland. He always behaved well in their eyes, and generally in everyone’s eyes with much circumspection […] It is a pity, he adds, that he had some interior tendency that prevented him following a more regular way of life. Was it imagination? Was it a weak state of health, arousing nervosity, or over-activity, a care and preoccupation over all the matters he was responsible for? All this contributed no doubt to make a constant regularity too difficult. While noting this fact as the others, to honour the truth, I must state that Father Noble had a really delicate conscience; I even believe he was scrupulous. Twice he came to make his annual retreat in Lys Marie and greatly edified the community with his regularity and fervour.” In his obituary Father Fabre comments on this letter with these words: “These observations show once again how exterior ministry, pushed too far, is opposed to the practice of religious regularity.”

As to his teaching, Father Fabre declares it was ‘solid’: “He imparted to souls a serious and energetic direction. He openly and courageously condemned secret societies, and fought them tirelessly: he was known as one of their most ardent antagonists. Uniting in intimate harmony both the affection he bore for his country and the submission he owed to the Church, he looked to God, and not to men for the triumph of justice and faith.”

Father Noble had welcomed Father Fabre on his visit to the province in 1866 and they were in correspondence in the weeks preceding his death. Father Noble was buried inside the church in Leith and his tomb is marked by a monument erected by public subion as a tribute to his memory.