For a few years, Bishop Anthony Philibert Dupanloup, bishop of Orleans from 1849 to 1878 had been asking Bishop de Mazenod for missionaries. In 1853, he also offered them the care of the parish and the Marian shrine of Notre-Dame de Cléry, situated about fifteen kilometres from Orleans. On February 22 of 1853, Bishop de Mazenod wrote to Father Ambrose Vincens, the provincial: “I find Orleans very attractive. There is good to be done in that diocese which needs to be enlivened ‑ and that abandoned shrine of the Blessed Virgin! Might we not pay ourselves the compliment of thinking that we are being called to raise it up again in the same way as God has given us the grace to raise up Laus, l’Osier, Lumières and La Blachère?” (Oblate Writings I, vol. 11, no. 1139, p. 124)

Towards the end of January 1854, Fathers Brun and Jean Marchal left for Orleans accompanied by Father Toussaint Dassy who was given the task of carrying out “negotiations” with the bishop. The Congregation committed itself to supplying a parish priest for Cléry, an assistant priest, four mission preachers and a few brothers. The bishop made a rectory available to them and gave them a salary of 600 francs and committed himself to supply the furnishings, a library, and to pay the travel and lodging costs of the mission preachers as they travelled to the various parishes.

The Parish and Pilgrimage
Cléry had one of the most beautiful shrines dedicated to the Blessed Virgin, a magnificent 15th century gothic church. The shrine was already famous in the 6th century. Ransacked during the Hundred Years War (14th and 15th centuries) it was rebuilt by Louis XI (1423-1483) whose tomb is in the basilica. 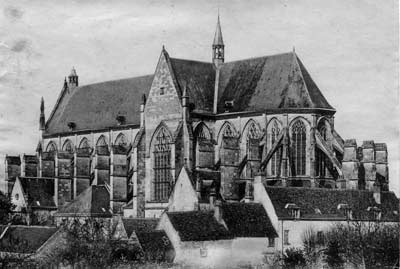 The residents of Cléry were indifferent with regard to religious practice and even hostile to the missionaries. When they arrived, the Oblates received a cold reception. Three priests were parish priests: James Brun in 1854-1855, Mark de L’Hermite from 1856 to 1863 and Jean Marchal in 1864-1865. Father Marchal had been assistant priest as of 1854.

The reports written by the Oblates are rather reticent about the parish and the pilgrimage. In the Notices historiques sur la Congrégation of 1854, 1855 and 1858, Father Casimir Aubert wrote: “The changes that have already taken place in this parish are very gratifying.” “The pilgrimage is moving forward, but without fanfare.” Father Vincens, in his acts of visitation of September 1854, noticed that “the pilgrimage still needs to be re-established and the work of mission preaching to be set up.”

The parish priest and his assistant priest set up several projects: Latin classes for young men destined for the seminary, confraternities for young girls and young men, an infants’ school, a needlework school for indigent young women, a men’s group. Attendance at Sunday Mass gradually grew little by little and some men began to appear in the congregation. In 1862, Father L’Hermite, the superior, stated that the good done in the parish “is considerable in an area where it is not a case of fostering the faith, but rather creating it from nothing.”

The pilgrims, few in number, came especially during the months of May and on September 8. Right from the time of their arrival, the Oblates celebrated in solemn manner this feast of the birth of Mary. From year to year, it drew more pilgrims, especially in 1863, when the statue of the Virgin was crowned. On that day, several bishops were present, with one hundred priests and more than twenty thousand pilgrims. In the last report on Cléry published in 1865, it is stated that the Oblates made a great contribution to “spreading the knowledge and renown of the pilgrimage.”

Parish Missions
The three or four mission preachers did a lot of preaching: 134 parish missions or parish retreats from 1855 to 1863 and 16 more in 1864 and 1865. But in the area of Orleans, this proved to be a difficult ministry. Bishop Dupanloup had made parish missions one of the main instruments of renewal in his diocese and, to this end, called upon four religious congregations to help him. But he imposed the missions on the parish priests which produced a very cool welcome for the missionaries, who, in addition to that, were for the most part working alone. In 1862, Father L’Hermite wrote: “This working alone is often distressing and in the course of the six months we work in the field becomes for us our greatest trial.” In addition to that, the results achieved brought little comfort. In 1863, Father L’Hermite confided to Father Fabre: “Upon seeing the religious indifference of certain areas, one would say that we are in a totally pagan environment. In addition to that, ordinary measures and ready made solutions are completely useless in the face of this kind of resistance. You would very much embarrass me if you asked me what method we follow in these Gospel forays. Battle plans are made on the field facing the enemy and more than one missionary who arrived on the spot with only his breviary has been astonished to see the gratifying success achieved by a strategy that he adjusted every day and of which we could say what Bossuet said of a corpse that it is an I-don’t-know-what which has no name in any language. Sometimes the sacrifice is not inconsiderable, to live alone a whole winter through amidst a population where the word penetrates only slowly, like the drops of water that eventually wear a groove in the rock, alone having to confront stern faces and haughty attitudes that seem to rebuke you for having come to trouble the public peace. Also, when the missionary sees appear in the distance the steeple of the modest village where he will catechize souls who will perhaps flee at his approach, people he despairs of reaching, his eyes are sometimes filled with tears and his heart, daunted for a moment, yearns for the centre of this religious family where he feels loved and supported […] Cléry is a good and powerful school where the missionaries learn to work for God alone and where they learn as well the genuine worth of souls by the painful price he has to pay to conquer them. I say this to the honour of the many missionaries the Congregation has sent to us: They have sowed in tears with an iron will and a tireless courage which God has blessed…” (Missions O.M.I., 1863, p. 468-469)

One of the most worthy Oblates in the diocese of Orleans was Father Joseph Bonnard whom Bishop Dupanloup dubbed “the king of mission preachers.” Father L’Hermite used to say of him as well: “That priest creates a stir wherever he passes. The parish priests love him; that means a lot. He is one of the renowned mission preachers of the diocese.”

Departure of the Oblates
When he sent the first priests in 1854, Bishop de Mazenod had written to Bishop Dupanloup: “Reserve for them ministry to the poor; they have a special gift for that ministry.” Not only did the bishop reserve for them the poor, but he left them in poverty. Early on, the Oblates perceived that they could not properly live on a salary of 600 francs per priest. On November 22, 1855, Bishop de Mazenod wrote to Father Bellon, the provincial: “…I agree that the monetary conditions for our existence are not acceptable and we have to provide otherwise thereto.” (Oblate Writings I, vol. 11, no. 1301, p. 295) In the month of December of that year, he informed Bishop Dupanloup that the salaries of the priest had to be increased. The agreement to work for only 600 francs was made with the expectation that the pilgrimage would have produced some income. But, “during the year, it provides no income at all.” It seems the Bishop of Orleans refused to grant this increase because on April 10, 1856, Bishop de Mazenod told him that for the moment the terms of the contract would remain as they were.

Another problem aggravated the situation for the Oblates. They were crammed into a rundown rectory. The bishop had held out to them the hope of moving into the ancient cloister. Bishop de Mazenod reminded Father Dassy of this in a February 11, 1854 letter: “What a difference there is between being crammed into a tiny rectory and in occupying the ample living space of former religious.” Oblate Writings I, vol. 11, no. 1198, p. 186) On this point as well, Bishop Dupanloup took no action and did not even reimburse the Oblates for the money they spent to make some absolutely necessary repairs. Father Fabre made a visit to Cléry at the end of October 1862 and wrote in his acts of visitation: “Vast church, genuine monument to the faith of our fathers. It is a sad sight, however, to see it despoiled of all the ornamentation of former times […] If the church is immense, the rectory is not. Hardly do our priests find under its roof the necessary space to breathe and work.”

Father Melchior Burfin, appointed provincial in December of 1861, made a visit in 1864 and found the position of the community untenable. In rather harsh language, he wrote the bishop that his confreres were asking two things: “bread and space,” that is, a higher salary and money to repair the house. The bishop then promised to purchase for them the house neighboring the rectory, but he did not keep his word and even subsequently admitted that he would do nothing.

It was at this point that Father Fabre, the Superior General, intervened by a March 28, 1865 letter that was polite, but firm: “We cannot and do not want to continue to beg for something Your Highness regards as impossible. We are all too convinced that, if you do not do it, it is because you are not able to do it […] To make earnest representations to you would be importunate and tactless of us. We do not wish to be one or the other.” He then announced that he was recalling all the priests and the brothers at the end of the month of May.

A flurry of letters ensued: Bishop Dupanloup kept making promises Father Fabre no longer believed. The missionaries left in May. Father Marchal, the parish priest, was replaced on September 17, 1865 by the Oratorians.

The Notice sur le départ des Oblats de M.I. de Cléry concluded with testimonies praising them: those of the Marquis of Tristan and Poterat, from the Viscount Gabriel de Chaulnes. The latter wrote to Bishop Dupanloup: “The Oblates have done an immense amount of good. We can say that they have renewed this area. But to achieve this they endured untold grief. Constantly visiting this indifferent people, conquering hearts by their charity, the Oblates were not only friends of the castle owners as certain men of God I know are; they were above all friends of the people, friends of the working class and the worthy peasants. It is for that reason that I hold them in even greater esteem. They were learned, hard working, zealous, very zealous, informed about the issues of the highest order with people of standing, simple with the simple people. They were, in the strongest sense of the term, men of God, and every time my heart drew me to visit the rectory, I left there edified…”