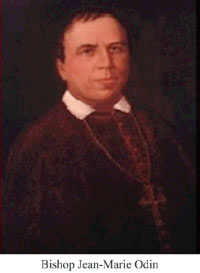 Jean-Marie Odin was born on February 21, 1801, in Ambierle, Loire, France. He studied in the colleges of L’Argentière and Alix. Then he went to the seminary of Saint-Sulpice in Lyon. Having been ordained sub-deacon, he went as a missionary to the United States and continued his studies in the seminary of Barrens, close to Saint Louis. He then entered the Vincentians. Bishop Louis William Dubourg ordained him to the priesthood on May 4, 1823. He taught in Barrens seminary, preached missions in the areas of Missouri, Arkansas and Texas where he became vicar to Bishop John Timon in 1840-1841.

On July 16, 1841, Pope Gregory XVI established the Apostolic Vicariate of Texas and appointed Bishop Odin to the see. The vicariate became the diocese of Galveston in 1846. Having been bishop of the diocese from 1846 to 1862, Bishop Odin was appointed Archbishop of New Orleans in 1862.

Both in Galveston and New Orleans, Bishop Odin increased the numbers of priests, religious and Sisters and he built numerous churches and schools He was present at the First Vatican Council, during which he became ill, returned to his home in Ambierle and died there on May 25, 1870.

Relations with the Oblates

First Oblate foundation in Texas in 1849
During a visit to Montreal in the summer of 1849, Bishop Odin met Father Adrien Telmon in the seminary of Saint-Sulpice. He spoke to him of the needs of his diocese, which consisted of the state of Texas, annexed to the United States in 1846 and greater in area than the whole of France. Father Telmon had just returned from Pittsburgh where he had been unsuccessful in making a foundation. He believed that he still had the authorization of the Founder to make a foundation in the United States.

Bishop Odin wrote to Bishop de Mazenod, on March 18, 1850, telling him that “Father Telmon, in a spirit of dedication, had agreed to set up an establishment of his Order in the poor diocese of Galveston. He therefore accompanied me on my return journey together with Fathers Soulerin, Gaudet and Gelot.” Father Augustin Gaudet, the scholastic Paul Gelot and Bishop Odin remained in Galveston while Fathers Adrien Telmon, Alexandre Soulerin and Brother Joseph Manthe continued on to Brownsville, a town that had been in existence for only three years and had 4,000 inhabitants. They arrived there on December 5 and on December 8; Father Telmon celebrated Mass in an improvised chapel. He purchased a piece of land and had a chapel built on it within nine weeks.

In his letter of March 18, Bishop Odin praised the skills of Father Telmon and he added: “I consider myself very fortunate that Providence has sent me these good Fathers for this part of my diocese; we needed not only zealous and exemplary workers but men of solid and tested virtue.” He asked for a further three or four priests since he wanted to entrust to them the seminary of Galveston, which would have a day-school attached, and he finished his letter by saying that all the Congregations in the United States understand the need “to combine teaching with the functions of the ministry” since that would help in the formation of regular communities.

This final thought was such as to be understood by the Founder, but his reply was rather to recall the Oblates with the exception of Father Telmon and the scholastic, Paul Gelot. Fathers Gaudet and Soulerin had written to tell him of the disastrous situation in which they found themselves. The minutes of the general council for the meeting of September 2, 1850, tell us about: “the vexing and painful condition of Fathers Soulerin and Gaudet whom Father Telmon presumed he had the special authorization to bring with him to establish a foundation in Texas. The letters of these two priests show that they cannot be left any longer in the isolated and perilous position in which they have been placed.” The Superior General recalled them “immediately”. Father Telmon became ill and returned to France at the beginning of 1850. Paul Gelot remained in Galveston and was ordained priest there. He joined the clergy of the diocese.

Second Oblate foundation
At the end of 1851 and the beginning of 1852, Bishop Odin whom the Founder called “a really holy man” was travelling in Europe. He stopped in Marseille on September 10, 1851 and he asked for and obtained six missionaries: Fathers Pierre Parisot, Étienne Vignolle, Pierre Kéralum, Jean-Marie Gaye, Rigomer Olivier, and Jean Verdet who was appointed superior of the group. They left from Le Havre on March 23, 1852, together with 32 seminarians and sisters, on a ship that was sailing directly to New Orleans, arriving there on May 11.

All the Oblates remained for some months in the bishop’s residence in Galveston to learn English and Spanish. In the month of October, Fathers Gaye and Olivier left for Brownsville where they continued the work of Fathers Soulerin and Telmon. Father Kéralum and the novice Barthélemy Duperray soon followed them. The others remained in Galveston to found the college-seminary whose first director was Father Vignolle.

At the beginning of 1853, Bishop de Mazenod appointed Father Jean Fleury Baudrand as superior of the college. He announced the appointment to Bishop Odin on January 11, saying: “I continue to count upon your goodwill in looking after my children who now become yours, since I have deposited them in your lap”. Father Baudrand commenced the building of the college on land donated by the bishop and with money lent by him to the Oblates. However, during the epidemic of yellow fever the superior became ill and died on October 1, 1853. His place was taken by Father Jules Baudre. The latter was not very well accepted by Bishop Odin who wanted somebody who could speak English. On March 14, 1855, the Founder wrote to Father Baudre: “Bishop Odin seems to me to be quite demanding because not only does he want me to replace the men who have died (Baudrand and Duperray) but he wants me to give him what I do not have.”

The college opened on January 1, 1855, with Father Baudre as superior at the beginning. He was replaced by Father Gaudet in October 1856. The new superior found that Bishop Odin interfered too much, even in the details of the running of the house. He said that the school was essentially a primary and commercial school with only a few seminarians. He suggested to the Founder that the school should be entrusted to the Brothers of the Christian Schools who were already present in Galveston.

When Bishop Odin learned of this plan he wrote to the Founder on May 15, 1857: “I dare to hope, your Excellency, that no complaint has been made against me, because I have never ceased to admire your priests and to everything I could to help them”. He begged Bishop de Mazenod to leave the Oblates in this institution, which was working so well, which did not have any debt and had about one hundred pupils.

On June 20, 1857, Bishop de Mazenod informed Bishop Odin that the Oblates would soon leave the college, “Not because they have the least reason in the world to complain about your Excellency because, on the contrary, they would be the first to acknowledge the justice and goodness with which you have always treated them and the generosity with which you have provided the financial and other means to help them achieve their purpose in the college in Galveston. I am indeed glad that your Excellency has given me the occasion, to let you know their feelings in your regard, which are those of respectful dedication to your person and a sincere acknowledgement of all your goodness. Besides, these are the sentiments which I try to inspire in all my children and which should be characteristic of the Oblates of Mary wherever God may send them and the trust of the bishops calls them”. He concluded by saying that the problem is the nature of the work: “education, even of ecclesiastics, is no more than a secondary end of the institute of the Oblates of Mary and the instruction of lay people in human sciences is altogether foreign to them.”

On the following June 23, the Founder wrote to Father Gaudet telling him to leave Fathers Parisot and Vignolle in the college for another year and he added: “Now, my dear Father Gaudet, all that remains for me to do is to recommend that you be very careful about the way in which you deal with the business of Galveston college with Bishop Odin… you must, as far as the formalities are concerned, leave room for nothing but praise on the part of the worthy bishop, who will be quite upset by our determination.”

The Oblates, then, all came together in Brownsville. Father Kéralum, the architect, saw to the building of a magnificent neo-gothic church, which was completed in 1859, and a large house, which was opened in 1861. The Oblates made missionary expeditions among the ranchos of the Rio Grande valley. They went to work in Mexico, in Matamoros, in 1857-1858. Then they preached in Cruillas, Burgos, Victoria and Agualeguas. Bishop Odin appreciated their work. In 1859 he wrote to Father Tempier, praising Father Gaudet who was loved by all and asking for more missionaries, even though, between 1853 and 1859 he had already received eight others.

After his appointment to New Orleans in 1862, Bishop Odin requested Father Fabre, superior general, to send him four Oblates to help him in that city “where the language spoken was mainly French”.

Relations between the Oblates and Bishop Odin always remained friendly and have borne much fruit in Texas since that time.