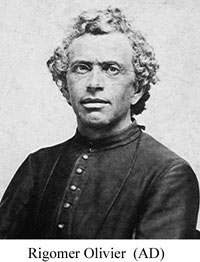 Rigomer Hippolyte Olivier was born in Marigné, diocese of Le Mans, France, on August 23, 1826. He had begun the study of theology in the major seminary of Le Mans, when he entered the novitiate of Notre-Dame de l’Osier on April 22, 1850. In his reports, Father Jacques Santoni, novice master, wrote more than once: “very good, charming character in spite of vivaciousness which escapes from time to time; good judgement, ordinary talents, nevertheless his pronunciation is quite poor… This young man, very much in tune with what is happening around him, could give good service.”

The novice pronounced his vows in the presence of Bishop de Mazenod on May 29, 1851. During his final year of theology in the seminary of Marseille, he was ordained to the priesthood on February 15, 1852. Father Jean Marchal, moderator of scholastics, wrote: “He worked hard to acquire all the religious virtues. He is a subject who seems solid and sure.” In the spring of 1852 he received his obedience for Texas where he ministered and was superior in Matamoros. Meanwhile he visited the Mexicans along the Rio Grande. During the wars he was a prisoner in Brownsville (1863-1864) and in Matamoros in 1899. He died in Eagle Pass, on January 13, 1899.