St. Joseph’s Parish was not the oldest parish in Bytown, now Ottawa, the Capital of Canada, nor was it the first to be founded by an Oblate in the area since the missionaries arrival in Bytown in 1844, but it certainly did come onto the scene with a bang when, in 1856 Bruno Guigues, o.m.i., first Bishop of Bytown/Ottawa and Bishop (now Saint) Eugene de Mazenod, Founder and Superior General, signed an historic contract. By it the Oblates took over the administration of the Cathedral of the Immaculate Conception, the ownership and administration of the College of Bytown (later: The University of Ottawa), and the ownership and pastoral care of St. Joseph’s Parish, until such time as either the Bishop or the Oblates wished to cancel the contract. The next year the first St. Joseph’s Church, designed by Fr. Damase Dandurand, o.m.i., was opened, and the following year, 1858, its first pastor, the French-Irish Alexandre Trudeau, o.m.i., was appointed to this new English-speaking parish. 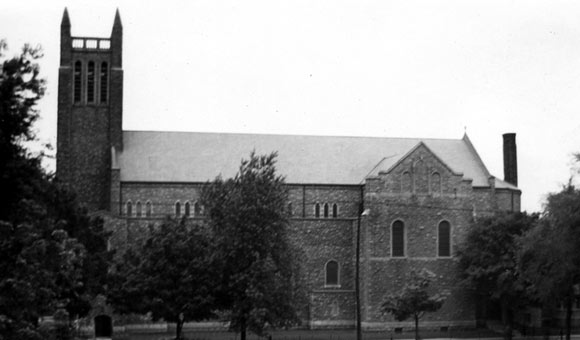 Located in the “Sandy Hill” district of the town, the church was situated at the outer edge of the wild “Lower Town,” on the site of a graveyard for the Irish workers, brought here earlier by Colonel By to work on the now completed Rideau Canal. Now Sandy Hill was to be the home of the newly arriving Irish refugees from the Potato Famine in their homeland. It was a perfect place for an Oblate mission church for these uncouth Irish, shunned by the British for being poor and Catholic, and by most French Canadians for being English, and not really Catholic. But in a few years Sandy Hill grew into the inner edge of an emerging ‘suburb’ that was soon to become, for the next 50 years, the upper class area of the new Capital of Canada. The original church was enlarged in 1866 by its pastor, Fr. Antoine Pallier, o.m.i., and in 1889 Sacré-Coeur Parish split off. Still too small, in 1892 Fr. Pallier oversaw the removal of the bodies of the pioneer Oblates from the church crypt and the church’s demolition and the construction of the second, and even larger, St. Joseph’s Church, that was to last until 1930. In 1910, Fr. Michael Fallon, o.m.i., former pastor, a fiery orator and controversial figure in the English/French language debate within the Oblates of the University of Ottawa, was recalled from his assignment in the United States and named Bishop of London, Ontario.

For many years, the pastor and superior of St. Joseph’s had been a Vice-Rector of Ottawa University, but that connection had ended by 1926 when St. Peter’s Province was founded and, in 1929, St. Joseph’s was transferred from Province du Canada to St. Peter’s (Denis Finnigan, o.m.i., pastor). That same year St. Patrick’s College High School opened its doors, temporarily, in St. Joseph’s Hall (Albert Meereboer, o.m.i., Principal). In 1930 the church burned, and Fr. Finnegan built the third, and present, church utilizing the foundation and the usable remnants of the outer walls of its predecessor.

Over the ensuing years sections of the rectory became, at various times, the headquarters of the Oblate Parish Mission Band, the Women’s Centre, and the Provincial Office (both St. Peter’s and OMI Lacombe Canada). The Missionary Association of Mary Immaculate, (MAMI) was founded at St. Joe’s in 1932. The year 1963 saw the demolition of the old “Red-Brick” Parish Hall that had, in its day, besides all that normally goes on in a church hall, also served as a hospital during the Spanish Influenza epidemic of the early 1920’s, a temporary high school in the late 1920’s, and a Barracks for Women of the Royal Canadian Air Force during World War II. Under the pastor, Fr. Cornelius Herlihy, o.m.i., it was torn down and a new Parish Centre was built in 1963 and, in 1973, the Provincial Administration moved into its basement.

The Parish had always been a leader in lay participation and community building, and that was to take a giant leap forward with the Second Vatican Council. In 1975-76 the charismatic Fr. Frederick Magee, o.m.i., pastor, founded “Waupoos Foundation” ministry, which has now spread far beyond the parish boundaries, offering holidays and recreational facilities to the working poor and, more importantly, establishing a pastoral mindset within the post-Vatican II laity that has been a hallmark of St. Joseph’s ever since.

In the 1970’s the rapid geographic expansion of The University of Ottawa, and the decline of Sandy Hill, now in the Ottawa city centre, as a family residential neighbourhood as young families fled to the suburbs, meant that the parish had to change its local focus and draw worshippers from the entire city if it was to survive. It has done so. In 1987, first the Parish Centre theatre balcony, (originally built for the storage of stage props, costumes, spotlights and a movie projector booth) then, in turn, the Rectory basement and former Oblate dining room were refurbished to become the first and second homes of the Women’s Centre for the inner city homeless. St. Peter’s Province was undertaking a basic restructuring of St. Joseph’s as it spread its wings beyond its old parish borders and ministries under the dynamic leadership of Fr. Frederick Magee, o.m.i. and then Fr. (later Bishop) Douglas Crosby, o.m.i.

In its 150 years St. Joseph’s Parish had given the Church 22 Oblates and 55 non-Oblate priestly vocations as well as many women Religious; nevertheless, the late 20th Century downward trend in priestly and Religious vocations in most of secularized Western Europe and North America was visible within the Oblates as well.

In the early 1960’s there were as many as six Oblate priests and one Brother stationed there, now in 2007, just past its 150th anniversary, there is only one priest, yet the parish flourishes because the parishioners have taken over the ownership of the programs, and have made De Mazenod’s charism their own. As the Oblate memorial stained glass window in the church says, “The poor have the Gospel preached to them,” Who were the new poor and how could the parish reach them?

From the seeds planted in that post-Vatican II decade, we can now see the harvest in many of the present-day Parish Ministries, from the Supper Table (started: 1978; now serving over 1,800 meals a month to the poor and homeless), the Refugee Outreach Committee, the Welcoming Committee, to the largest Parish outreach program – the partially Government-supported Women’s Centre for the poor, homeless and abused women of all faiths (11,700 visits and 16,626 meals in 2006). Nevertheless, what we cannot loose sight of is that these present-day lay endeavours are fundamentally the modern manifestation of the charism of St. Eugene de Mazenod, which was already there from the day the parish was founded. Fr. Alexandre Trudeau, o.m.i.’s 19th century Irish Potato Famine refugees have been succeeded first by Fr. Jack Davis o.m.i.’s 20th Century Cambodian Boat People and now by the Refugee Outreach Committee’s 21st century Congolese, Ivorian and Eritrean civil war refugees.

In the first decade of the 21st century seven of the eight Canadian Oblate Provinces underwent a basic refounding and by 2005 there were only three: Assumption (Polish), Notre-Dame du Cap (French: Quebec and Ontario) and Lacombe (English and French/West). St. Joseph’s Parish is part of the new OMI Lacombe Canada Province.

In 2007, of the three ministries conveyed and entrusted to the care of the Oblates by Bishop Guigues, o.m.i., and accepted by the Founder by their 1856 contract, only St. Joseph’s Parish remains in Oblate hands. While the Oblate commitment to the Parish remains firm under the present pastor, Richard Kelly, o.m.i., he in his turn, as has every truly missionary Oblate pastor before him, is preparing the parish to carry on living the Oblate charism even if there comes the day when there is no Oblate on staff, just our spirit -which will never die.