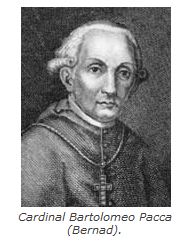 Bartolomeo Pacca was born at Beneventum on December 25, 1756. He studied under the Jesuits in Naples, at the Clementine College in Rome, then at the Academy of Churchmen of Noble Descent. He received holy orders in 1785. In 1786, Pius VI appointed him titular bishop of Damiette and nuncio to Cologne. Created cardinal in 1801, he was vice-secretary of state in 1808, in the wake of the forced resignation of Cardinal Gabrielli when the French occupied Rome. Arrested with the Pope in 1809 and exiled in Italy and then in France, he returned to Rome after the fall of Napoleon. He then held several important posts in the Curia and remained a close collaborator of Popes Leon XII, Pius VIII and Gregory XVI.

In 1825-1826, he was prefect to the Congregation of Bishops and Regulars. It was due to this position that Father de Mazenod went to see him at his residence twenty times and was three times invited to dine with him. The first time he was received was on December 11 with a letter of recommendation from an Abbé Taillé. He wrote in his diary that that day he was “received politely.” The cardinal would not change his attitude and would be patient because, from January 7 until February 15, he received the Founder every two or three days. On January 7, it was to request obtaining from the Pope a simplification of the procedure: having the Rule examined by three cardinals instead of seven or eight. Since he was ill, the cardinal was constantly putting off his visit to Leo XII. He finally saw the Pope on January 19 and obtained the requested favour. The Founder then asked him to call as soon as possible a session of the three cardinal commission, but the cardinal was not in a hurry, all the less so since Cardinal Pallota, one of the members of the commission was, in his turn, ill. On January 18, Father de Mazenod wrote: “He always receives me very well and never goes any faster than before.” Finally, on February 15, the cardinals met and approved the Rule.

It was once again to him that the Founder went to ask the Pope for an exemption from the tax for the brief; Leo XII granted this favour as well on April 7. Father de Mazenod wrote in his April 14 diary entry that he made his good-bye visit to Cardinal Pacca and added: “The Cardinal was, as usual, very kind to me; he expressed his regret at seeing me leave and embraced me very affectionately, wishing me a good trip. I found it difficult considering that I will never again see this excellent Cardinal…” (Oblate Writings I, vol. 17, p. 136) In an April 16 letter to Father Tempier, he confided: “I could not tire of citing the interest, the confidence, the genuine affection that this venerable Cardinal has shown me at every encounter.”(Oblate Writings I, vol. 7, no. 237, p. 88)

In a December 3, 1831 letter, Bishop de Mazenod recommended Félicité de Lamennais to Cardinal Pacca. He met him a few times in Rome in 1832 and 1833 in the course of the Icosia affair. They exchanged several friendly letters and business letters in 1838, 1839, and 1840. The Cardinal died on April 19, 1844. Bishop de Mazenod learned of it only on April 29. He wrote in his diary entry of that day: “ News of the death of my venerated friend, Cardinal Pacca, dean of the sacred college. In him, the Church loses one of its most illustrious bishops. In him, I lose a genuine friend who always showed me much affection mingled with a kind of tenderness. His correspondence reveals the extent of his affection for me. Today, I celebrated Holy Mass for the repose of his soul, but I want to see applied for him all the indulgences which will be earned by the Congregation for fifteen days. We must never forget that he presided the committee of cardinals who approved our Rules in 1826.” ( (French text, Écrits oblats I, vol. 21, p. 149)

In the course of his trip to Rome in July-August 1845 for the wedding of his niece Caesaria de Boisgelin, Bishop de Mazenod went to pray at the tomb of Cardinal Pacca in the church of Monticelli. (Oblate Writings I, vol. 17, p. 165-166)

In 1825-1826, Cardinal Pacca had already written his Mémoires which were of capital importance in learning of the relations between Pope Pius VII and Napoleon from 1809 to 1815. The Founder read them in Rome from the end of March to April 7, 1826.