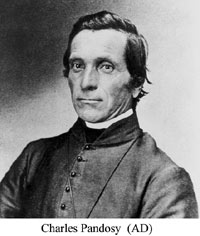 Félix Jean Charles Pandosy was born in Marseilles on November 21, 1824. His parents were Étienne Charles Henry Pandosy, a navy captain, and Joséphine Marie Dallest. He did secondary studies in the Bourbon College in Arles and then in the juniorate in Notre-Dame de Lumières. He began his novitiate in Notre-Dame de l’Osier on August 14, 1844, and took vows there on August 15, 1845. He then went to the major seminary in Marseilles to study philosophy and theology.

At the end of 1846, Bishop de Mazenod gave in to the insistence of Bishop Magloire Blanchet of Walla Walla in Oregon and Bishop Demers of Vancouver who had been asking him for missionaries for their dioceses. On February 4, 1847, the first Oblate caravan left Le Havre and arrived in New York on April 2. They reached Walla Walla on September 5. In about ten letters written at the beginning of 1847, the Founder names and sings the praises of those missionaries: Fathers Pascal Ricard, superior, the scholastics Georges Blanchet, Casimir Chirouse, Charles Pandosy, and Brother Célestin Verney. He says that the scholastics Chirouse and Pandosy are “two angels of virtue”. Writing to Bishop Blanchet on January 23, 1847, he quoted the notes made by the novice master on Charles Pandosy: “Good, pious, very punctual; I have only good things to say about him. He never loses his peace of mind, which keeps him so content. I do not believe that even Saint Louis Gonzaga observed obedience better than he does etc.”

After a few months of adaptation and study in Walla Walla, Charles Pandosy was ordained to the priesthood by Bishop Magloire Blanchet on January 2, 1848. At first Fathers Pandosy and Chirouse lived together in the mission Saint Rose among the Yakima Amerindians while also serving the missions of Immaculate Conception and Saint Joseph. Later, they often lived alone in one or other of the missions. Father Pandosy spent several winters in Moxee and in Abeski. Bishop de Mazenod was concerned about this situation of isolation. In 1854 he sent Father Pierre Louis Richard to be with Father Chirouse in the Cayouse mission of Saint Anne and Father Paul Durieu was sent to accompany Father Pandosy in the Yakima mission of Saint Joseph. Father worked zealously there from 1848 to 1858. He had to leave his mission at the end of 1858 because of the war between the Americans and the Amerindians. At that time he went to stay with the Jesuits in Coleville and then, in 1856, he returned to find the mission completely destroyed.

According to Father Carrière, while he was in Oregon, Father Pandosy composed a grammar and dictionary in Yakima. In a letter to Father Fabre dated June 22, 1862, he wrote: “My Yakima grammar has been printed as has also that in Sellish”.

In the personnel register of 1862, someone has written the following alongside his name: “The health of a nervous man and tending to be a loner, he dabbles a lot in medicine for himself and for others.” He had a variety of talents, especially in music, botany and agriculture. He was also a teacher and a peacemaker etc. Lieutenant Charles William Wilson, a member of the British commission for territorial boundaries, described Father Charles Pandosy as a very pleasant man, well informed [with a] beautiful vice and [who would not] disdain a pick-me-up, etc. However, his relations with his confreres were somewhat difficult. Their correspondence contains an abundance of denunciations. No doubt that explains why he asked for a dispensation from his vows after the Chapter of 1867. The reason he gave was that by inserting the education of youth as one of the ends of the Institute, the nature of the Congregation had been changed. In a letter dated February 28, 1873, Cardinal Barnabó refused the dispensation saying that the reason given was unfounded.

Father Pandosy died after a short illness, on February 6, 1891. He had had an accident in the Indian camp in Penticton and at the time his confrere, Father Alphonse Carion was far away with the Amerindians on the Pacific coast.