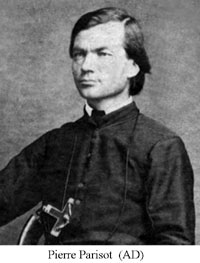 Pierre Fourrier Parisot was born on May 20, 1827, in Ambacourt, diocese of Saint-Dié, France. His parents were Rémi Parisot and Marie Charotte. After his studies in the minor seminaries of Saint-Dié and Châtel-sur-Moselle and one year of philosophy in the major seminary of Saint-Dié, he began his novitiate in Notre-Dame de l’Osier on February 25, 1850 and made his vows there on February 26, 1851. In his reports, Father Jacques Santoni, novice master, always notes “very good”. In presenting him to the general council for vows he elaborates: “solid virtue, good character, somewhat fat, military; good judgement.” He did one year of theology in the major seminary in Marseilles, was ordained to the priesthood by Bishop de Mazenod on February 15, 1852 and left at once for Texas with six confreres. In a report in 1852, Father Jean Marchal, moderator of scholastics, wrote: “Brother Parisot, physiognomy is not much of an advantage to him, and that takes away from him at times; the Brothers keep their distance at first appearance; but his courage, his zeal and his dedication, his cheerfulness and his good spirits, his charity in all circumstances, soon overcome these disadvantages”.

We do not have the details of his various obediences. On his arrival in Texas he was destined for the college in Galveston and there, from 1855 to 1857, he was prefect of studies, professor of Greek, Latin and mathematics. In 1853-1854 he made a missionary journey in eastern Texas and Louisiana to publicize the new college. From 1857 to 1895 he seems to have ministered in Brownsville as pastor of the English-speaking people but he was also in charge of the missions in the district of the Gulf of Mexico towards 1859-1860 (Cruillas, Burgos) and he did some ministry in Bagdad in 1863-1865.

In the period 1861-1865, like the other Fathers, he suffered from the poverty and the dangers caused by the war of secession. In 1867 he worked for the liberation of Fathers Olivier, Vignolle and Clos who had been made prisoners in Matamoros. In the 1872 Synod the bishops proposed that Brownsville should be raised to an apostolic Vicariate and that Father Augustin Gaudet should be appointed apostolic Vicar. The general administration refused to accept responsibility for the vicariate. Father Dominic Manucy was appointed in 1875. In 1880, Cardinal Simeoni, prefect of Propaganda, asked Father Fabre for information concerning Father Parisot who was being considered as a candidate for the apostolic Vicariate of Brownsville if the see became vacant. Father Fabre replied that the proposed candidate did not have the qualities necessary for the position. Father Parisot was delegate of the United States Province at the Chapter of 1887. On that occasion, as in the preceding years, he defended the Texas mission, which Father Fabre and the General Administration, in the years 1861 to 1863, had wanted to abandon.

At the Mass for his golden Jubilee of priesthood, Sunday February 26, 1902, Bishop Meerschaert, Vicar apostolic of the Indian Territory, spoke of the different stages of the jubilarian’s life. “the vocation, ordination, farewell to his family, and country, and then voluntary exile for God and souls, the trials, the fatigue, all sorts of worry, but also the plentiful harvest, the chapels, convents, schools, which have sprung up in the vast mission field of Texas”. The author of a short account of the event added: “Everywhere, Father Parisot fostered the development of Catholic education. He was one of the principal founders of the Saint Mary’s University in Galveston for which he had obtained a constitutional chart from the government. The money that had established this institute on a solid foundation had been collected by him in his missions, and not without much suffering. He founded Saint Joseph’s College in Brownsville, which for years had been the central school for the lower Rio Grande. He helped the Sisters of the Incarnate Word to establish a house in that city, and, as well, Saint Mary’s College and the Ursulines’ convent.”