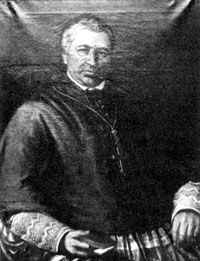 Patrick was born on February 1, 1795 in Ballyragget, Ireland. He emigrated to the United States in 1821. Bishop Lefebvre de Cheverus of Boston sent him to study in Montreal. He was ordained to the priesthood on September 24, 1825 and he entered the Sulpicians on the following November 21. He was then placed in charge of the Irish parish of Saint Patrick in Montreal. In 1842, he was appointed pastor of Bytown, which was then in the diocese of Kingston, and he was Vicar General of Bytown and Kingston.

On February 20, 1843 he was chosen as titular Bishop of Carrhae and coadjutor of Kingston. He received episcopal ordination from Bishop Ignace Bourget in Montreal on August 20, 1843. He remained in Bytown until the arrival of Father Telmon at the beginning of 1844. Beginning in 1843 he took on the administration of Kingston diocese because of the illness of Bishop Gaulin and he was appointed administrator of the diocese on January 30, 1852. He brought religious communities to the diocese, developed Regiopolis College and established a network of Catholic schools.

Relations with the Oblates
From the time of his appointment to the episcopate, Bishop Phelan tried to find a replacement as pastor of Bytown where the Catholic population was half French speaking and half English speaking. He was considering a Canadian priest for the position and one of the two Irish priests who lived with him. Bishop Ignace Bourget suggested that he send him the Oblates who would not only care for the faithful in Bytown but would also minister to the workers in the loggers’ camps and the Amerindians dispersed along the Ottawa River and its tributaries.

Bishop Phelan hesitated. In his letters to Bishop Bourget, he repeated continually that it must be “someone who speaks English” and, among other things, he wrote on December 1, 1843, that many people in Bytown were accusing him of wanting to bring in “foreigners”. In December he expressed the desire to meet with Father Telmon who was a likely candidate for the appointment but the latter hesitated to come as he had heard that the Bishop was less than favourable to the suggestion of Bishop Bourget. Finally, Father Telmon arrived in Bytown on January 24, 1844 and Bishop Phelan left the following day for Kingston.

At first Father Telmon had the help of two Irish priests but they left Bytown when Father Damase Dandurand arrived in the month of May. On June 20, 1844, the Oblate establishment in Bytown was canonically erected by Bishop Phelan who then informed Bishop de Mazenod on June 22 and requested that he send an Irish Oblate as soon as possible. The Founder replied on August 8. He expressed his joy at knowing that the Oblates were established in Bytown “a city with a future”, reminded him that they were men of the bishops and invited Bishop Phelan to be a second father to them.

In the course of the following years, especially during 1845 and 1846, Bishop Phelan spent some weeks in Bytown. He calmed the animosity of the Irish against Father Telmon and obtained from them a contribution towards the building of the cathedral. He encouraged the Oblates who, in 1845, brought the Grey Nuns from Montreal and, in 1846, founded the college that was to become the University of Ottawa. On March 24, 1846, Bishop Phelan thanked the Founder for having sent Father Michael Molloy. The Founder replied on June 8, encouraging Bishop Phelan in the difficulties he had as a result of the relations of the Irish faithful with Father Telmon. He added: “Father Telmon has not left me ignorant of all that you have done to consolidate good works in Bytown. For that it was necessary to exercise all the firmness at your disposal and that is what must be done by someone who has divine authority”.

In the following years Bishop Phelan maintained a good relationship with the Oblates. In 1846, he signed the petition of the bishops of Canada requesting the erection of the diocese of Bytown and the appointment of Bruno Guigues as bishop. He was assistant at the episcopal ordination of Bishop Guigues on July 30, 1848 and he signed the letter from the bishops to the governing President of the Hudson Bay Company requesting permission for the Oblates to establish permanent foundations in Moose Factory and James Bay.

Third Bishop of Kingston, Death
After the death of Bishop Gaulin on May 8, 1857, Bishop Phelan became titular bishop of Kingston. While attending the funeral of his predecessor on May 13, he caught a cold and died the following June 6. He is buried in Saint Mary’s cathedral.