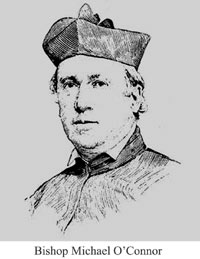 Bishop Michael O’Connor (1810-1872) of Pittsburgh, Pennsylvania (1843-1860) was passing through Marseilles at the end of 1843 and he asked Bishop de Mazenod for some Oblates for the major seminary in Pittsburgh. The Founder’s reply was negative because of lack of personnel. Bishop O’Connor renewed his request for priests and, on June 7, 1848, he met with Father Guigues in Longueuil to arrange details for an establishment of the Congregation in Pittsburgh. Fathers Adrien Telmon, Augustin Gaudet and the scholastic Eugène Cauvin were appointed to staff the major seminary and they left on September 15, taking over the seminary on October 3. They found that there were only six students, lodged in a poor little house which was then under repair and was destined to be an orphanage. They were there for only a few weeks, because on January 3, 1849, Father Telmon wrote to Mother Bruyère in Bytown saying that the seminary was now in another house which was also undergoing repair and he added: “So, what else have I done since my last letter? Alas! only the same as I have done since my arrival here. I build, I do carpentry, I clean, I wash, I get covered in dust, I ruin myself, I wear myself out…”

Father Telmon sent news to the Sisters in Bytown and Longueuil but he wrote very little to the Founder. On November 5, Bishop de Mazenod reproached him for not writing regularly and gave him some advice: “By founding a house in Pittsburgh in the United States, you are laying the foundations of a new Province but you must act with moderation, without prejudice, without passion, not yielding unhesitatingly to optimism but neither assuming a pessimistic attitude, a detestable disposition with which one can in no way be enterprising and can achieve no good.” Father Telmon did not take account of this wise advice because on March 12, 1849, he informed Bishop O’Connor that they were leaving the seminary. If they were to stay it would be necessary that there should be more esteem and confidence on the part of the bishop who kept delaying permission to purchase land on the pretext that he wished to get to know the Oblates better. On March 23, Father Cauvin wrote from Longueuil to Bishop Guigues: “The establishment in Pittsburgh does not exist any longer”. He confirmed the views of Father Telmon saying that all that the Oblates received from the bishop was coldness and indifference. Nevertheless he added: “In spite of all that, as far as was possible, we did our duty. Things were in order and the exercises of piety as well; the seminarians received their formation according to the rule. They were happy with us, as witness the tears they shed at our departure. In a word, the bishop has nothing with which to reproach us.”

Bishop Ignace Bourget regretted this hurried departure by Father Telmon without consultation with his superiors. On June 11, the bishop of Montreal wrote to Bishop de Mazenod: “I could not say if his burning spirit suited the phlegmatic Americans. I must admit that I am hurt by this failure in Pittsburgh and I find that it would have been wiser for him to let the bishops of Bytown and of Pittsburgh arrange the various details at the time of foundation”