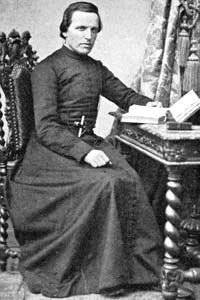 Toussant Rambert was born at Marseilles on July 8, 1828. It seems he went to Notre-Dame de l’Osier in 1846, but was deemed too young and little disposed to make a good novitiate. He was sent to the juniorate of Notre-Dame de Lumières. When that juniorate closed in the summer of 1847 Toussaint and a few of the juniors who were further on in their studies were sent to the novitiate. His conduct still left a lot to be desired when he arrived in this house. The Founder wrote to Father Santoni, the novice master: “I cannot hide from you that I am stunned about what you tell me concerning Rambert. I was a thousand times correct in insisting to admit him, because he had all that was needed to become a good missionary. It seems that this young man became spoiled during his stay at Lumières. Those who were his directors here are convinced of it, and Father Chauvet who had given me many useful details concerning him also believes this. Be that as it may, if he has forgotten himself to the degree that you say, and if these reports are not false, nor prejudiced, which happens sometimes, it is not possible to keep him; send him away immediately and tell him why.” (Oblate Writings I, vol. 10, no. 946, p. 181) On October 20, he gave the same advice to Father Vincens, the superior of the community of Notre-Dame de l’Osier: “If he is insolent and grumbling, he must be sent away.” (Oblate Writings I, vol. 10, no. 951, p. 189)

In spite of all this, young Rambert began his novitiate at Notre-Dame de l’Osier on October 31, 1847. They were still not very satisfied with his conduct during the summer of 1848. On July 1, the Founder wrote Father Vincens: “What are we to think of this Rambert, who was accepted as a favour, reinstated by charity, and is still so imperfect?”(Oblate Writings I, vol. 10, no. 982, p. 228) He made his oblation on November 1, 1848. In the October 2, 1848 session of the General Administration, he was admitted to vows. In the session’s report, the secretary wrote: “His acceptance was for some time debated and uncertain. Reasons for and against were presented. Among the latter figured front and foremost the character defects of this young man, his caustic manner, his rather frivolous character with little concern for his prayer life. On the positive side, his above average talents, his rather regular observance and his love for his vocation were touted. The result of the deliberation came down on the positive side. Consequently, he was approved for oblation.”

After four years of theological studies at the major seminary of Marseilles, Toussaint was ordained to the priesthood by Bishop de Mazenod on June 27, 1852. From that time on, there was no more talk of his character and his mean spirit. As an educator, preacher and writer, he became on of the most valued Oblates.

Educator
Father Rambert spent his life in houses of formation. He was professor of dogma and canon law at the major seminary of Romans in 1853-1854, by turns, professor of Sacred Scripture, dogma, moral and canon law, then of eloquence at the major seminary of Marseilles from 1854 to 1862, master of novices in Nancy from 1862 to 1865, superior at Aix from 1865 to 1868, superior of the scholasticate at Autun from 1868 to 1877, superior of the major seminary of Fréjus from 1877 to 1889. Upon his death in 1889, Bishop F. H. Oury, the bishop of Fréjus, wrote a circular letter to his clergy in which he praised the merits of Father Rambert as an educator, but especially his gifts as a counsellor and co-worker in his role of superior of the major seminary for twelve years. Among other things, he wrote: “From day to day we saw grow the role he played in our decisions and our advice. His liveliness of spirit, the scope of his intelligence, the variety of his abilities, the ease with which he grasped the scope of problems, the speed with which he assimilated them, made of him for us a treasured ally whose absence in innumerable circumstances will be sadly felt. It did not take long for us to be convinced of the weightiness of his judgments, of his prudence, of the depth of his commitment to duty…” (Missions O.M.I., (1889), p. 418)

Preacher
During his lifetime, Father Rambert preached numerous retreats, especially to Oblates, but also to religious sisters. While he was superior of the house in Aix, he gave several parish missions with the priests of that community. In 1865, he preached a retreat for the priests of Midi at Talence. In this regard, the writer in Missions O.M.I. stated that: “The retreat began on June 4 in the evening, Pentecost Day. It was preached by Reverend Father Rambert. Father Rambert’s talents as an orator are well known. The years he spent as novice master at Nancy, his longstanding ministry in formation at the seminaries of Romans and Marseilles, his seniority in the Congregation, his zeal and his attachment to all the interests of our dear family gave his words and his teaching a persuasive authority. There was a basic melding of simplicity and richness of content with accuracy of form. The theme was wide in scope and fruitful […] These teachings in which his logical mind displayed the unity in the thousand details that poured out of his mouth were welcomed with delight. People never tired of hearing him speak because truth shone forth every moment in all his novel perspectives and applications that were most appropriate…” (Missions O.M.I., 1865, p. 441)

Biography of the Founder
In 1875, Father Joseph Fabre, the Superior General, asked Father Rambert to write a biography of Bishop de Mazenod. He set to work immediately. For two years, he worked as often as he was able in the archives in Marseilles and in those of the General House in Paris. He took notes and copied excerpts from documents. In 1877, he announced that when they asked him to take on “this precious work, the worker should have been seized with fright because of his lack of ability, but the lot of the religious was to simply obey and the son’s role was to throw himself into carrying out a task that brought such consolation.” He amassed 2,000 pages of notes and excerpts. In this regard, we read in Missions O..M.I., 1876, p. 217: “Hardly had he taken on this mission of deep trust when Father Rambert set to work and already he has worked through and put in order a voluminous correspondence. It was an important preliminary work. The rest will follow and with the energy and talent that are the distinguishing mark of the writer, we can expect to see shortly a fine life of the Founder find its place in the first ranks of books in the libraries of our communities.

In 1879, Father Rambert wrote that he had reached the year 1856 in writing the life of the Founder and the 1883 Missions O.M.I. announced that the biography had just appeared in two volumes which totalled 1520 pages. Cardinal Guibert, the cardinal archbishop of Paris and Bishop Robert of Marseilles among others, thanked the author and praised his work. (Missions O.M.I., 1883, P. 457-461)

Other Activities of Father Rambert and His Death
In spite of his numerous occupations and responsibilities, Father Rambert accepted to be first ordinary consultor for the province of Midi from 1877 to 1882 and extraordinary consultor in 1882-1888. He took part in the General Chapter of 1873 as the delegate for Natal and in the Chapters of 1879 and 1887 as the delegate for the province of Midi.

Father Rambert died on July 12, 1889 after a few days of illness as a result of a grievous fever. His death was announced in the 1889 issue of Missions O.M.I., (p. 417) in these words: “Last July 12, death dealt us a palpable blow and inflicted on the Congregation a cruel loss! Father Toussaint Rambert, superior of the major seminary of Fréjus died almost suddenly in the full spate of his ability and the maturity of his experience in the course of a very busy career and which held out the promise many more years to come […] An obituary will one day be devoted to the memory of our beloved departed…” This obituary was never written.

The memory of Father Rambert lives on in the Congregation, especially because he was the first biographer of the Founder, but also for several other reasons. For example, the writer in the 1907 Missions O.M.I. told us: “Heaven had gifted Father Rambert with a variety of talents, the kind of combination that is rarely found in the same man. On occasion, he showed himself brilliant in salons and edifying in his community life. In his person, the distinguished manners of the gentleman set off the brilliance of the man of God. Few religious would have been able to say with more truth than he did: Domine, dilexi decorem domus tuae. [Lord, I have loved the beauty of your house] Our chapels of Nancy, Aix, Autun and Fréjus are monuments to his spirit of prayer with regard to the Blessed Sacrament…”