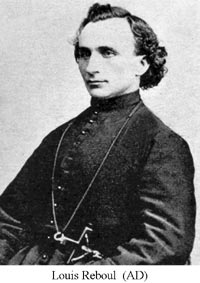 Louis Étienne Delille Reboul, priest, missionary, Oblate of Mary Immaculate, was born in Saint-Pons, diocese of Viviers, France, on December 4, 1827. His parents were Antoine Reboul and Augustine Marie Guillon. He died in Mattawa, district of Nipissing, Ontario, Canada on March 2, 1877.

He was the son of one of the most well to do and honourable families in Saint-Pons. Louis Étienne Delille Reboul studied in the minor seminary of Bourg-Saint-Andéol and in the major seminary of Viviers (1847-1850). He then entered the Oblate novitiate in Notre-Dame de l’Osier, Isère, where he took vows on December 8, 1851. He then completed his studies in Marseille and was ordained to the priesthood by Bishop Charles Joseph Eugene de Mazenod on June 27, 1852.

Father Reboul ministered for some months in Notre-Dame de la Garde, Marseille, and then he left for Canada. He was sent to Bytown where he was a helper to Bishop Guigues in the surrounding missions and devoted himself to parish ministry in South Gloucester, Russell county, from 1853-1855 and Desert River, Maniwaki, Gatineau county, in 1855 and 1856. During the summers of 1854 and 1855, he worked in the Indian missions of Temiscamingue, Abitibi and James Bay.

In the winter of 1854, Father Reboul undertook his first mission in the loggers’ camps. He went as far as Deep River, Ontario, and Black River, visiting the various camps of young men who were employed to cut the forests and providing them with access to religious practice. He visited about 60 camps in which the total work force numbered about 1,500. In summer the missionary visited these men again in the region of Ottawa. He became the leader of the team of missionaries to the camps in the Ottawa area in 1858 and Father Reboul continued this work for several months each winter until his death, which took place during one of his mission journeys.

For the rest of the year he lived in Ottawa where he did parish ministry and provided spiritual and temporal care for travellers for whom he became the legendary apostle. He denounced the unscrupulous hotel owners and made every effort to settle disputes among his flock and to preserve the peace between Catholics and Protestants. In this ministry he served in the little chapel of Notre-Dame-des-Voyageurs in Hull, which had been established for the men from the camps.

Beginning in 1860, Hull was developing and most of the men from the camps were living there with their families. The Oblates made the village a mission and Father Reboul was appointed to serve all the Catholics. In 1868 he began the building of a vast church, a presbytery and schools. He realized all these enterprises without going into debt, thanks to his facility for obtaining gifts through subions and with the backing of Bishop Guigues and the money of his parishioners.

In 1871 the Oblates accepted responsibility for the parish and Reboul was sent there to reside as pastor. He became the soul and the father of the locality, taking part in all activities and never shirking any work that had to be done. He was president of the school committee; he worked on the building of a bridge and was very active in obtaining a charter for the town in 1875. From 1866 until his death he also exercised his ministry in the monastery of the Good Shepherd Sisters in Ottawa.

Father Reboul was an upright, frank and loyal person and he earned the affection and the respect of everybody. Lake Reboul (Winawiah), in the region of the Great Lake Victoria (Temiscamingue county), a school, a street and a park in Hull bear his name.

G. A.: oblation formula, a letter to Father Vandenberghe in 1879.
“Jean Louis Reboul”, in Notices nécrolgiques OMI, Tome III, Paris, 1879, pp. 353-381.
Carrière Gaston, o.m.i., “Louis Étienne Delille Reboul”, in Dictionary of Canadian Biography,Vol. X, from 1871 to 1880, University of Toronto Press/Les Presses de l’Université de Laval, 1972, with bibliography. This is the text that is reproduced here with the kind permission of the director, M. Benoît Bernier.